A Minute to Midnight (An Atlee Pine Thriller Book 2) 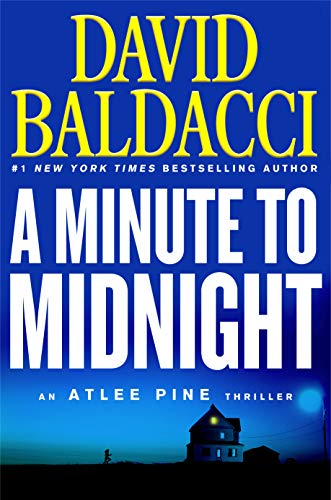 Baldacci’s legions of fans will probably love this book, but new readers will find it lacking in too many of the requisite storytelling skills. Baldacci’s plot, pacing, style, and dialogue all wreak havoc on a potentially gripping thriller with disappointing results.

Female FBI agent Atlee Pine, six-foot-two in heels and able to bench press 500 pounds, visits incarcerated serial killer Daniel James Tor. Pine wants to know if he is the man who kidnapped her twin sister and fractured her own skull 30 years earlier. He refuses to help.

Frustrated, Pine leaves and immediately responds to an Amber Alert. She corners the pedophile who has seized a ten-year-old girl, and the scene descends into absurdity. Once Pine has subdued the man, she continues to beat him, fracturing his skull, breaking his nose, and landing in trouble with her superiors.

Instead of suspending Pine or putting her on report, her supervisor tells her to go back and re-examine the disappearance of her twin 30 years before to subdue the demons that still haunt her.

This contrived setup, presented in flat narration, is the premise of the story.

Pine returns to Andersonville, Georgia, the home of the infamous Civil War prison, and the site of her own early tragedy. She brings her assistant, Carol Blum, who acts as a sounding board for inane observations, sort of a maternal Tonto. Pine’s father is dead and she has lost touch with her mother, and everyone she questions about the old case lies or dissembles, some of them obviously. Pine gets hints that her parents, who were apparently stoned when her sister was taken, may have been in witness protection after working with the Feds on a sting operation aimed at the New York mob. She can’t confirm this, though, which is surprising.

It’s all potentially intriguing, but Baldacci’s plot, pacing, style, and dialogue wreak havoc. There isn’t a single aspect of this work that could not be improved. The characters are never more than types, and the dialogue is painfully heavy handed. Baldacci has apparently never heard of pronoun reference or antecedents, and his prose ranges from perfunctory to pedestrian.

Baldacci also stages scenes that are physically impossible. Near the end of the book, a sniper tries to shoot Pine and her passenger (from a never-explained vantage point), while they drive on a highway. Then the villains’ car approaches Pine at a high rate of speed. When it’s 60 feet from her, she puts four shots through the windshield, shoots out a tire, and disables the car’s engine—at night with a 9mm handgun. The car stops 30 feet short of her. So much for the laws of physics. If the sniper is such a good marksman and has a night scope on his rifle, why can’t he see that he shoots the male passenger instead of his female target?

The two plots shed no light on each other. Myron and Britta Pringle were with Pine’s parents when her sister was taken, and they play major roles in the contemporary killings, but it’s a coincidence rather than because the two cases connect. In fact, the Pringles consistently show both thought patterns and behavior that are difficult to believe.

So does Pine. In one scene, she goes to examine a crime scene alone at night, and two rednecks attack her. They have nothing to do with the rest of the book, but it gives Pine a chance to beat them up and remind us again that she’s a kick-ass chick. That’s what got her into trouble in the first place with the pedophile.

Pine has high stakes in finding out what happened to her twin sister, but nothing in her behavior demonstrates any real emotion. The foster father of a young boy who is one of the murder victims expresses his remorse as if he’s reading it off a teleprompter. Add the Pringles to the mix, and the book’s characterization needs substantial revision.

The serial killing plot, which appears about 60 pages into the book, is resolved by people suddenly deciding to spill their guts in arias that would make Puccini jealous, and the motivation is ridiculous and unconvincing.

Baldacci leaves the missing sister plot, the impetus for this novel, unresolved with a deus ex machina twist that Euripides would love two pages from the end of the book. That revelation should lead Pine ask a very important and logical question. She doesn’t ask it, of course, but maybe she will in the promised sequel.

The book’s pace drags, too, especially in the first half. Long sections of wooden dialogue develop neither the plot nor the characters. One chapter features a curator talking with Pine about the history of the notorious Andersonville Civil War prison, and it has no connection to the book except that the first contemporary body shows up there. Once the two cases exist, Pine concentrates on one or the other for long periods with no reference to the other one.

The pace picks up in the last half when Baldacci adds the sniper and a bomb (another unbelievable scene) as though he’s remembered Raymond Chandler’s famous dictum. Unfortunately, the tactic screams of Dan Brown cliffhanger syndrome.