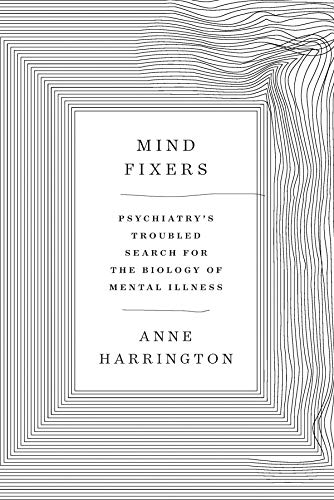 “Harrington has written a challenging book. The shortcomings of current ideas in the causes and treatments of mental disease are clearly documented. Her insights into the social aspects of treatment deserve to be addressed.”

The field of psychiatry has had a somewhat troubled existence ever since its inception as a separate medical specialty in the early 1800s. In its early years, patients were all institutionalized, often under very poor conditions. Treatments were ineffective, and patients presented with a variety of conditions, some psychological and some medical. From this inauspicious beginning came the discipline we know today as psychiatry.

Anne Harrington is The Franklin L. Ford Professor of the History of Science at Harvard University. She explores the development of psychiatry from its early studies on brain structure to the psychoanalytical approaches of Freud and others to the more modern approach to treatment involving medications. Not just a tome of historical narrative, Harrington weaves personal insights and incidents into the strands of facts and descriptions.

The book opens with a broad overview of the discipline in the mid-to-late 1800s. There were two major schools of thought. Mental illness either involved some sort of disorder in brain structure or was related somehow to the inner mind of the patient. At first, the neurological approach gained ascendancy. Brains of patients at autopsy were carefully dissected and analyzed under the microscope in hopes of discovering some structural abnormality. However, none was found consistently.

As we entered the 20th century, a psychotherapeutic approach became more popular as the brain studies failed to provide any insights into psychiatric disorders. Harrington describes the rise of Freudian psychoanalytical techniques to probe the inner workings of a patient’s mind. Freud pioneered the use of psychoanalysis, a lengthy process of patient-psychiatrist interaction (often taking years) to look at past occurrences and influences that might affect patient behavior.

The idea of “biological psychiatry” also began to be developed during these years. Prevention of psychiatric illness in offspring was done by sterilization of the “feeble-minded” so they would not pass on the disorder to their children. Inducing of comas with insulin, electroconvulsive therapy, prefrontal lobotomy (see One Flew over the Cuckoo’s Nest and Frances)—these and other techniques were tried to treat mental illness, usually with little success.

The use of drugs to treat psychiatric illness began to take hold beginning in the early 1950s. Many of the treatments were developed serendipitously since there was no understanding of any biochemical imbalance that contributed to metal illness. Harrington covers this early history in some detail, developing an interesting narrative that describes both professional exchanges and personal interactions among the clinicians who were striving to find ways to deal with the psychological challenges that their patients presented.

The middle section of Mind Fixers looks at the biological approach to psychiatry with regard to three prevalent mental illnesses: schizophrenia, depression, and manic-depressive (bipolar) disorder. Each of these disorders was first thought to be caused by some sort of psychosocial dynamic. In each case, drug treatment became the treatment of choice, even in the absence of any clear biochemical mechanism that might cause the disease.

Harrington looks in detail at early theories of schizophrenia believed to be caused by shortcomings in parenting, especially the mother (no, she does not buy into this at all). A series of somewhat connected studies allowed the development of drug treatments that were somewhat successful in dealing with some cases of schizophrenia.

Of interest is the section on the use of LSD and related psychedelic materials for treatment. Other neurochemicals such as serotonin and dopamine were implicated due to their structural and metabolic similarity to LSD. Amphetamines also became players in the game. However, there is currently no obvious biochemical cause of schizophrenia.

Depression was not considered as a major psychiatric illness until the 1950s or later. Individuals had “the blues” (well documented in folk and pop music) or were “melancholy,” but the formal diagnosis of depression took a while. Harrington focuses on pharmacological treatments involving changing the activity of the enzyme monoamine oxidase (MAO). This enzyme breaks down serotonin in the brain, and low serotonin levels were believed to give rise to depression. To this day, there is still debate about the efficacy of the various antidepressants. Also needing to be asked is the question: Do low serotonin levels actually exist in the brain, and are they the cause or the result of depression?

Manic-depressive illness has been recognized for centuries. Because of the cyclic nature of the symptoms, it was once called “circular insanity.” In more recent years, the term “bipolar” has been applied as less pejorative than the original. There is at present no workable biochemical explanation for bipolar disorder. Lithium salts are known to be somewhat effective for treatment due to an accidental discovery that Harrington describes in some detail.

Harrington concludes the book with a recommendation that psychiatry goes back a century or so and focuses on treating the seriously ill and leaving the less-troubled (but still malfunctioning) individuals to counselors, social workers, and related groups. Her hope is that focus can then better be brought to bear on the etiology and treatment of mental illness (but without the degrading and harmful institutionalization that was the norm much earlier).

Harrington has written a challenging book. The shortcomings of current ideas in the causes and treatments of mental disease are clearly documented. Her insights into the social aspects of treatment deserve to be addressed. She gives us a challenge to move beyond the boundaries that different disciplines have established so that a comprehensive and coordinated attack on mental illness can be launched.