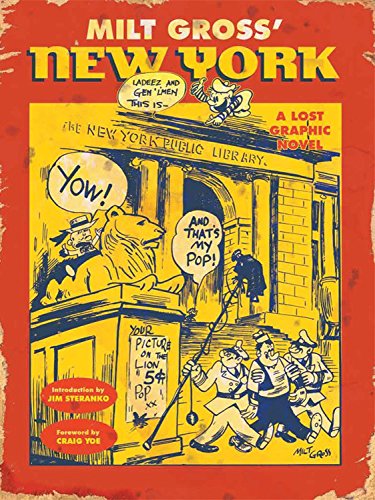 For decades Milt Gross’ New York was considered to be one of the great lost graphic novels of comic literature. Those who searched for a copy considered it a missing classic from another, long forgotten era. Even though many had never actually seen a copy of the incredibly hard to find title, previous works by the author and artist were so strong that the book’s quality was a foregone conclusion.

Those who waited years to read the work were right. The book is a wild ride that showcases the best of what a narrative comic can be. It is also a great example of how comics contribute something significant to the culture of this country.

In a country that has been rapidly moving away from its agrarian roots to a city-dominated, manufacturing social structure, books such as this were instrumental in making millions of American’s realize just how vast and varied its roots really are.

As funny as it is, Milt Gross’ New York real, unspoken contribution to that culture is that it exposes New York City, the pre-Second World War Flatbush neighborhood of Brooklyn and the Russian-Jewish dialect known as Yiddish to the rest of the country.

Like the rapid-fire patter of a skilled tummler jumping between tables at a Catskill resort, Gross is firing on all cylinders. Not all the jokes may land, but there is enough of them that the laughter never really stops. The drawings combine the manic facial expressions of a Jerry Lewis with the skewed or distorted conversational patter of Danny Kaye.

As a whole, Gross’ art is a big step toward the wildly exaggerated animation style of Tex Avery and the sixties underground style of R. Crumb. In many ways it is also a forgotten work that sets the stage for MAD.

What makes so much of it work is the way that Gross grounds everything in a reality that reflects both New York and the New York World’s Fair of 1939–1940.

As he does he also exposes those who couldn’t make the trip eastward to what the “far-away” lands were like.

Gross’s style was rooted in a screwball style of comic art. His early work appeared in numerous newspapers with his first real success coming from a column called Gross Exaggerations. It was there that his ability to combine Yiddish with English started to catch on. He was able to make this unlikely marriage work in such a way that almost everyone found something to laugh at in this linguistic mash-up. Eventually the column gave way to a Sunday page strip called Nize Baby. Gross also did the topper for the strip, Banana Oil. That title went on to become a national catch-phrase for bullshit.

Its source, Gross Exaggerations, went on to become a daily strip. Both were filled with magnificent screwball-style art. Fans loved the absurdity, the hyperactivity, and the general wackiness of it all. While Gross was one of its most successful practitioners, as a style screwball comics would reach its zenith with Smokey Stover by Bill Homan.

This early success set the stage for a 1926 anthology Nize Baby. The title was taken from yet another catch phrase originated from Gross’ mind. The book serves as a perfect example of how Gross would take familiar stories from different cultures and, through parody and humor, expose them to others. The title gathered such stories as De Pite Piper from Hemilton, Nize Ferry-tail from Elledin wit de Wanderful Lemp and Jack witt de Binn Stuck. All three titles should be easily known to modern audiences, but 90 years ago that wasn’t the case.

In many ways Gross was the literary equivalent of Weird Al Yankovic. In a second book published in 1926 he parodied Longfellow’s Song of Hiawatha with Hiawatta wit No Odder Poems.

Few artists and writers had a better grasp of what the long form, comic-based narrative structure could do than Milt Goss. In 1930 he created a 300-page comic that didn’t have a single word in it. He Done Her Wrong was a pen and ink pantomime that was perfect for the end for the silent film era. The book was so popular and so inventive that it was just reprinted in 2005.

With the appearance of He Done Her Wrong Gross went on to publish more books as well as work on toppers, the short comic strips that appeared on top of a more established Sunday full-page strip. One of these was That’s My Pop! This is the strip that serves as the basis for this collection of gags and drawings.

Imagine a highly supportive Bart Simpson embracing every single thing that Homer does. It’s this recurring punchline of blinding loyalty to your dad that anchors this strip.

The work is a parade of jokes from the time. During a ship’s christening Pop holds a Rube Goldberg-esque funnel to catch the falling champagne as his son cheers Pop’s inventiveness. (Just imagine Bart applauding Homer’s drunkenness . . .)
Gags about the elevated train and the subway sit next to jokes on the Yankees. Conniving operators who inhabit The World’s Fair are part of the same world as the massive stone lions who guard the New York Public Library.

Editor and publisher Craig Yoe documents the book’s history and eventual rediscovery in his foreword. He also reminds the reader of the oft-forgotten economic failure of so much of the New York World’s Fair of 1939–1940.

At times the humor, far removed from the day in which it first appeared, doesn’t carry well into modern times. That goes for a few of the images, too.

This is life as we often forget it was lived.