A Million Reasons Why: A Novel 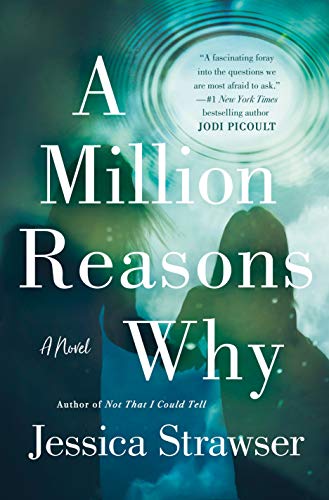 As an only child, Caroline Porter always wanted a sibling—specifically a sister, but that didn’t happen. Now, at age 35 Caroline is happily married to Walt, has three children, and lives in Ohio.

Her world is shattered when she receives an email from an unknown North Carolina woman named Sela Bell, stating she believes she and Caroline are half-sisters. Shocked at the thought her father could have been unfaithful while married to her mom, Caroline shows Walt Sela's post. They decide to check her parents’ email. Though she feels guilty doubting her folks would hide something like this from her, she needs to learn the truth. Logging on to her mom's site offers no answers, but when she goes to her dad's address, she is met with the words: Sela Bell. Daughter.

Not only did her father cheat on her mother, but it was when they were newly married, for Sela is about the same age as Caroline. What is worse . . . her parents know about Sela, yet they don’t acknowledge her. How can this be? Her folks have always been open and truthful.

Caroline is furious about this information and heads to her parents’ home to discuss this. Upon arriving, she finds the newspaper on the front walk, which is an oddity for her father usually waits on the porch for its delivery. She rings the bell again and again until her mom flings open the door with puffy eyes and an angered expression on her face. Caroline's rage turns to fear—has something happen to her dad? Refusing to talk, Caroline makes coffee while her mother gets dressed. Then her father appears, and a confrontation ensues between them both. When Carolina mentions an email she has received, her mother bursts into tears. This confirms her fears. She does have a half-sister.

Confronting her dad, she asks how and why he was unfaithful to her mom:

"He grimaces. 'This is going to keep sounding worse.'

"'If you expect this to be the only time we ever discuss this, I'm not letting it go until I hear the whole story.'

"He looked away. 'I met her at our wedding.'

"'Of course not. Bet it was an at-first-sight kind of thing.'

"'I wanted it to be. Still do. Rebecca was the friend who Hannah always talked about, but I'd never met. She was an artist, talented enough to be accepted to competitive programs before she was even out of high school. They'd been close since they were little, but she'd been studying abroad for as long as I’d known Hannah. A semester in London, a summer in Paris, a year in Italy . . .' The emotion in his eyes turned to something she'd never have expected. Pride. 'Their home lives were equally bad, which is how they bonded in the first place. But for Rebecca, not only did her parents not get along, they wouldn't get divorced. They were older—had already raised Rebecca's brother, who was long gone—and the way she put it was that they were over being parents. Her father stopped bothering to hide what a violent drink he was. Once she realized her talent was her ticket out, she used it. But she and Hannah wrote to each other—your mom wallpapered her dorm room with the postcards.'

"Caroline already knew how soon after graduation her parents had gotten married. The following weekend, in fact.

"'Hannah was so excited Rebecca was coming back in time for the wedding. At the rehearsal dinner, she forced the two of us together and commanded us to not stop talking until we'd won each other over. . .'

. . . "'But when I got to talking to Rebecca, I never wanted to stop. I began to worry I was starting to understand new things about love. The way it can knock you off your feet, blind you to reason.'

From this discourse, Caroline sees how easily her father had been taken in by Rebecca, but still, he continues to cheat on her mom. He states he reevaluated his choices but stayed with Caroline's mother when he learned she was pregnant. Surprisingly, Rebecca also was too, but she ended the affair and moved away.

Caroline emails Sela, stating her shock and apologizing for not knowing of her existence. She informs her of the current turmoil between her parents, but she would like to correspond with her newfound sister with no expectations or ties. Sela cries with relief for she not only hopes to connect with an unknown sibling, but she also has a hidden agenda. She is suffering from kidney failure and to survive, she is in desperate need of a transplant. After she is diagnosed, she separates from her husband Doug, and then her mom suddenly dies. Refusing to give in to her grief, her main concern is for her young son, Brody, and her need for a donor.

It's clear Sela never contacted her father per her mother's wishes, and she believes her only hope for a match is from Caroline. They meet, and Walt is bothered by her sudden appearance thinking Sela has an ulterior motive, which in fact, she does. He is distrustful toward Sela and becomes argumentative with his wife about her sudden appearance after all these years. Against his wishes and without informing him, when Caroline learns of Sela’s health problems, she gets tested to see if she is a compatible match to offer Sela her kidney.

By this time, the two women have become friends and Caroline desperately wants to help her, but when she and Walt arrive at her home, they learn some disturbing news about Sela. Can Caroline risk her health for a sister she recently met and who holds other problems in addition to a diseased kidney?

Both Caroline and Sela tell their stories in separate chapters, offering their insecurities, hurts, and distrusts, which makes this a complex and riveting read.