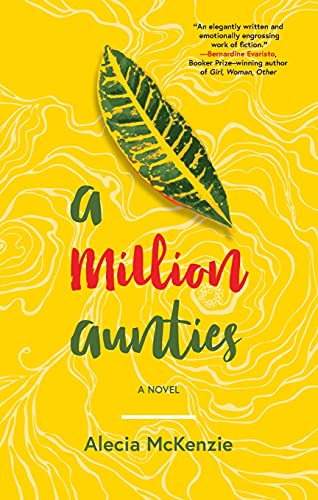 Have you ever not wanted a book to end? Were disappointed that the characters are gone from your life? A Million Aunties by Alecia McKenzie is one such novel that makes you yearn for more. Its brilliantly developed characters linger after the story has ended and you wonder how the artists, widowers, adopted and biological sons and aunties are managing. You want to sit with them at the kitchen table, eating fried dumplings and slices of plantain and sipping mint tea or coconut water, and listen to their stories of loss and hope. Get to know them better. Sadness and all.

Grief is prevalent in this short yet powerful novel. After the death of his wife Lidia, Chris, a New York artist, finds solace in his late mother’s homeland. He stays at Miss Della’s house and paints flowers. Flowers abound in this story, but like a flower, nothing lasts forever. There is a brilliant memory of Chris and Lidia as they discuss reincarnation. Lidia says, “‘I think that when you go, you know, Chris, the most you can ask for is to come back as a flower.’ Chris replies, ‘The end is the end. There’s no coming back, Lid.’”

McKenzie creates memories that float like petals in the wind or smash like hard waves against a shore. From Jamaica to America to France.

In a heartbreaking scene where Miss Della explains the reason she chooses to remain single you can hear her grandmother’s voice just as she hears it: “And clear through the quietness, I hear Granny talking to me: ‘I didn’t raise you for man to come punch you. Take your backside out of there.’”

McKenzie has crafted captivating characters and chapters that hold your attention and with each turn of the page you want to learn more about Miss Della who raised Chris’s agent and friend Stephen and the woman nicknamed Miss Pretty who wanders the roads with a fur coat even in Jamaica’s heat. With sensitivity and subtly, McKenzie provides glimpses into these characters’ pasts. She paints gardens filled with poetic passages and dialect that delightfully ring in your ears. Your senses are awakened with descriptions of Caribbean food, community, laughter, and struggles.

With a troupe of fascinating characters, the protagonist Chris tries to find hope after the senseless death of his wife. He travels with his companions to France where they witness Monet’s water lilies and also forceful demonstrations.

Although the novel focuses primarily on Chris’s journey, it is the women characters that hold your intrigue. Miss Della is a strong woman who has taught a young boy to be a responsible man.

Throughout the novel, McKenzie gracefully tackles tough topics such as racism and violence against women. When Stephen physically stands up to a man who uses derogatory language, Miss Della wishes Stephen could have handled things in a peaceful manner. “He avoiding looking at me because he know that is not how I raise him. And though I was laughing a little while ago, I was sad to realize that the dark space in him that I think was gone is still there. But maybe I have one too, if I look deep enough.” She goes on to share that “No, he didn’t do the right thing, I say. Next time we just turn our back on fool-fool people like that.”

There are several story threads in this moving novel. For example, when Miss Della feels a lump in her left breast her story isn’t fully developed. It leaves the reader feeling sad and, again, wondering what will happen to Miss Della. Maybe this is McKenzie’s intention: provide fragments of material and let the reader imagine scenarios. In a way, McKenzie identifies in her writing that we don’t always know what will happen in life.

When Stephen as a child makes fun of Miss Pretty, Miss Della says, “‘Don’t ever let me see you make fun of people like Miss Pretty!’ she shouted at [Stephen]. “You never know what can happen to you in this life!’” In this passage, McKenzie touches upon mental illness as well as the kindness of Miss Della and others who provide Miss Pretty with food and care. This sense of community is described so beautifully in this compassionate novel.

Despite the novel’s strengths, sometimes it feels like there is too much going on, and this causes the story to lose focus.

Yet the solid character development and brave writing bring you back, and you can’t help but wonder what will happen next in this multilayered and relevant narrative.

Sonia Saikaley's most recent book is the novel The Allspice Bath (Inanna Publications, 2019), winner of the 2020 Independent Publishers Book Award Gold Medal and the 2020 International Book Awards for Multicultural Fiction. Previous works include two poetry collections and an award-winning novella.