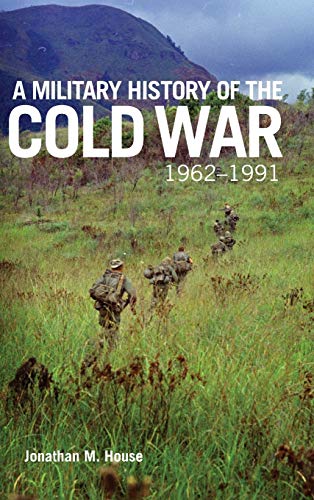 “an excellent introduction to the surprisingly wide spectrum of military conflicts, both hot and cold that occurred from 1945–1991.”

Historian Jonathan House concludes his two-volume military history of the Cold War with this impressive survey of the large and small wars that dominated the final three decades of the U.S.-Soviet conflict.

This era was dominated by insurgencies, guerilla wars, and the rise of terrorism, with a few major conventional conflicts in the Middle East, and even superpower wars in Vietnam and Afghanistan. Deciding which conflicts to cover and how much depth to cover them is a major challenge in a single volume and House clearly had to make some difficult choices.

He begins the book with what he calls a “halftime assessment,” examining both the nuclear and conventional balance of power between NATO and the Warsaw Pact in the wake of the Cuban Missile Crisis. As the Soviet Union begins a massive decade long buildup of both conventional and nuclear weapon quality and quantity, the U.S. and our NATO allies struggle to maintain conventional capabilities while dealing with the other crises of the decade.

He then continues with a chapter each covering the post-colonial actions in Africa, Latin America, and South Asia, highlighting the major players and events of the turbulent 1960s, including the fairly significant proxy support by the U.S., Soviets, and especially Cubans in many of these conflicts.

The Vietnam War receives two full chapters and the author examines the full range of military actions from the beginning of the Viet Cong insurgency to the increasingly conventional battles leading to the Tet Offensive in 1968 before concluding with the full-scale invasion of South Vietnam in 1975 by a North Vietnamese Army equipped with tanks and artillery.

The Soviet invasion of Afghanistan also receives major coverage, showing the failed strategic and operational decisions by the Politburo and Red Army, combined with the effects of the U.S. support for the Afghan mujahedeen with sophisticated weaponry. Although the Soviet leadership was able to mostly manage the political and social fallout from the conflict within their totalitarian system, in the long term it became another nail in the coffin for the Communist Party’s rule.

The two major Arab-Israeli wars of 1967 and 1973 receive somewhat less coverage, which is kind of surprising given their outsized effect on military doctrine and weaponry for the remainder of the Cold War. In the concluding chapters, the author describes in great detail the influence new weapons and the heavy losses on both sides during the 1973 Yom Kippur War had on the American generals seeking the rebuild the Army’s fighting capabilities after the Vietnam debacle. The author shows the clear lineage of the Army’s 1980’s AirLand Battle doctrine and “Big 5” weapons systems to the lessons learned from the costly Israeli victory in 1973.

The author begins the final decade of the Cold War with the disastrous Desert One mishap that began a decade of American military reform. The short conflicts in the Falklands and Grenada are plugged into the overall developments of this decade and the numerous small conflicts America has in Lebanon, Libya and the Persian Gulf are also covered. The volume concludes with the failed attempt by Mikhail Gorbachev to stop the economic and military decline of the Soviet Union, culminating in the peaceful dissolution of the Warsaw Pact and the peaceful reunification of Germany.

Although the Cold War era avoided a major nuclear exchange, there were still plenty of conflicts driven by the bi-polar competition between the U.S. and USSR, and House does an admirable job of summarizing the major conflicts and military trends of this era. The author concludes with his observations of the major trends and lessons that are useful for both students and professionals, making this an excellent introduction to the surprisingly wide spectrum of military conflicts, both hot and cold that occurred from 1945–1991.