The Military History of China: From 1218 to the Present Day 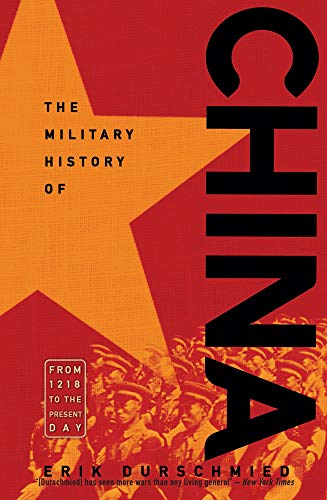 “The book concludes with a stark assessment of China’s coupling of its immense economic power to the country’s long-term goals of achieving hegemony in Asia and then becoming the premier world power of the 21st century.”

Abraham Lincoln wrote, “We cannot escape history” and this quote is the key to understanding China’s motivations and actions as the rising power of the 21st century.

In this volume focusing on the military history of China, the author uses a series of linked vignettes to tell the largely unknown, at least in Western culture, story of China’s rise, fall, and now re-emergence as not only the dominant hegemon in Asia, but a global power determined to gain the respect and deference believed to be their right.

The book’s unusual format does not use the traditional narrative format and this has its advantages and disadvantages. The primary disadvantage is the author skips over large swaths of time and turns each chapter into kind of a case study. But this issue is fairly minor, as the author chooses to focus on several fascinating but less well-known events in Chinese military history, and he does an excellent job of tying them to current Chinese political, diplomatic, and military thinking.

Beginning with the Mongol Empire of Genghis Khan and his successors, the author describes almost 800 years of both Chinese prowess and folly, from the horsemen from this arid region who swept into the Middle East to the gates of Western Europe to the armies of Mao Zedong and his successors seeking to revive China as the Middle Kingdom.

Two of these are particularly noteworthy. First, for nearly a quarter century before the great age of European exploration, China was the preeminent naval power in the Western Pacific and Indian Oceans. The author chronicles several voyages of Admiral Zheng He, China’s greatest sailor, who commanded vast fleets of ships far larger and more sophisticated than anything in Europe at the time. Ranging as far west as Africa and very possibly as far east as North America, this armada not only conducted trade agreements, but spread the glory of China and its Ming Emperor.

However, in a recurring theme of the book, short-sighted leadership cancelled those voyages and decommissioned China’s mighty fleet just as the European voyagers were heading out seeking their own trade routes and eventual colonies.  The period of Chinese naval renaissance is not well known in the West, but it is often quoted by contemporary Chinese as proof of their nation’s heritage as a maritime nation.

The other piece of history is the Sino-Soviet split during the Cold War. The author presents a fascinating analysis that this Communist falling out had its roots much earlier than previously assumed in the West. The split between the titans of Communism actually began in the Korean War, before the death of Joseph Stalin, when the Soviets refused to provide air support to the Chinese armies getting ready to intervene in order to save the North Korean regime. As the author notes in subsequent chapters, this confrontation escalated through the 1960s and was much more dangerous the previously known and only recently declassified sources show just how close the Soviets came to launching a nuclear first strike on China during a series of border skirmishes in 1969.

This Sino-Soviet split leads to the last part of the book, the opening of China to the West after President Nixon’s historic 1972 visit. This crack in the monolith of global Communism leads to the subsequent rise of China as not only a military but an economic power determined to use all parts of the traditional DIME model of strategy:  diplomatic, information, military, and economic, to achieve its eventual rebirth of power.

The final section of the books examines the now forgotten incident in early 2001 when a Chinese fighter collided with an American reconnaissance plane in the South China Sea, causing the death of the Chinese pilot and the emergency landing of the American aircraft on the island of Hainan, leading to a several weeks-long tense standoff between the new Administration of George W. Bush and the increasingly assertive Chinese leadership. Although the crisis was resolved peacefully with the return of the crew and airplane, China put the world on notice that it would start to defend its territorial claims in the South China Sea.

The book concludes with a stark assessment of China’s coupling of its immense economic power to the country’s long-term goals of achieving hegemony in Asia and then becoming the premier world power of the 21st century. Dealing with China’s global ambitions peacefully will be not only the biggest diplomatic and security challenge facing the United States, it will become the dominant issue facing Asia at large this century.