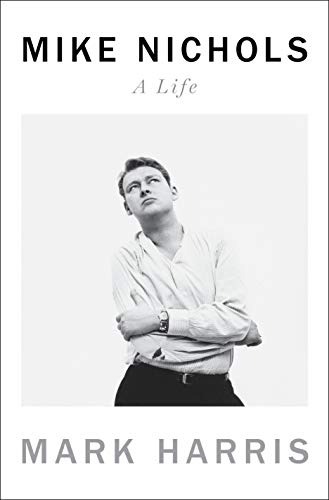 “Mike Nichols: A Life is an invaluable contribution to the history of American theatre and film since World War II as well as a colorful portrait of one of its most celebrated and at times denigrated practitioners.”

Mark Harris’s 600-plus page biography of comic-turned-director Mike Nichols will be an essential starting point for future work on this legendary show business luminary. Harris tells Nichols’ life story from his childhood in Berlin to his move to America at the age of eight to his career, friendships, and relationships. This is definitely a “warts and all” biography, chronicling in detail Nichols four marriages, his drug abuse, and his mental breakdowns. The dark sections are balanced by accounts of Nichols’ gift of friendship. More important, the book offers a detailed study of the ups and downs of a career that spanned over half a century.

Igor Michael Peschkowsky was born in Berlin in 1931 to a Russian-born doctor and his wife. The family was relatively affluent and well-connected (Albert Einstein was a cousin). Like many German Jews, his mother thought of herself as a German first and neither parent was religious. Soon after Igor Michael was born, he had an allergic reaction to whooping cough vaccine that led to a lifelong inability to grow hair. This led to painful self-consciousness. His father moved to New York, passed his New York state medical examinations, changed his surname to Nichols, started practice, and in 1939 brought his sickly wife and two sons to America. Mike was sent to excellent private schools but the strange-looking bald kid never fit in. His father died when he was 13, and the family became suddenly impoverished. The teenage Nichols didn’t have much sense of direction, but he had developed a love of theater from seeing Elia Kazan’s productions of A Streetcar Named Desire and Death of a Salesman.

When Mike enrolled at the University of Chicago in 1949, he first protected his insecurity with hauteur and disdain. His life changed when he met Paul Sills (later founder of Second City) and joined Sills’ new theatre group, the Compass Players. There he met Elaine May who also had a reputation for hostility and a sharp tongue. Soon Nichols and May’s routines became the mainstay of the Compass Players repertoire.

Nichols and May decided to try their luck in New York and quickly became night club stars. Their success at the Village Vanguard and Blue Angel led to recordings, television appearances, and a successful if exhausting Broadway run. Phase one of Nichols’ career was being half of Mike Nichols and Elaine May. Their friendship would have its problems, but they were still collaborating half a century later, though in a different medium. During the Broadway run of An Evening with Mike Nichols and Elaine May, Nichols began the giddy socializing that would become central to his life.

Phase two of Nichols’ career was as director of hit Broadway comedies. He had his first triumphs as director of Neil Simon’s immensely successful commercial comedies: Barefoot in the Park, The Odd Couple, and The Prisoner of Second Avenue, and Plaza Suite. This seemed a logical career move—a successful comic turns expert at directing comedies—but Nichols’ restless ambition would not settle for this comfortable niche, even though it was making him a rich man and even more of a celebrity.

Phase three: Hollywood. In the 1960s, Nichols had two enormous successes: the film adaptation of Edward Albee’s Who’s Afraid of Virginia Woolf? and the film that seemed to define the anomie that was affecting young people in 1968, The Graduate, which became one of the most successful films of all time. Nichols next films were not as successful. In fact, his career as a film director was one of peaks and troughs. There were later successes like Silkwood but also failures. Nichols’ last great work would be on films made for television, particularly his six-hour adaptation of Tony Kushner’s Angels in America for HBO.

The most valuable sections of Harris’s study are his lively, detailed accounts of the process of making both Nichols’ stage and screen hits and the painful accounts of what when wrong on the productions that failed. Basing his accounts on reminiscences of scores of people involved with the productions, Harris brings the rehearsals and film shoots to life. Harris’s history of Nichols’ productions shows that many theater artists shared Nichols’ self-destructive streak. The Neil Simon hit The Odd Couple seems less amusing when one knows of Art Carney’s battle with alcoholism and Walter Matthau’s chronic unpleasantness. Substance abuse of various kinds seems rife on Broadway and in Hollywood during Nichols’ career. Nichols himself was a cocaine addict.

The boy who was taunted and bullied became a man who socialized with A-list celebrities. Nichols lived the high life: opulent New York apartments, a Connecticut farm, swanky cars, fine art, and purebred horses. He was constantly worried about making enough money to sustain the luxurious life he craved. One telling anecdote was his complaint about the quality of caviar on a dining table in one of his film shoots. He complained that the kind of wealthy people he was depicting would never have such cheap caviar on the table and order an assistant to go out and buy the finest available. Maybe no one watching the film would notice but Nichols noticed. He also took home what was left after the shoot.

Harris also has spoken with the people personally closest to Nichols who lived through his excesses and his joyful moments. Nichols had a gift for friendship, for making people love him. Like many artists, he also had a self-destructive streak that could damage his relationships and his work. Notable among his many friendships were his intense collaborative relationships with women, particularly May, Meryl Streep, and Emma Thompson. After a series of unsuccessful marriages, Nichols in his later years he found the perfect life partner in television personality Diane Sawyer, a person who has as dedicated to her work as he was to his but who also gave him a stable home life.

Mark Harris’s biography is a must for every film and theatre buff. Every moment in Nichols’ life and career comes vividly alive. The book is also a meticulous piece of scholarship, thoroughly annotated and containing a generous selection of illustrations. Mike Nichols: A Life is an invaluable contribution to the history of American theatre and film since World War II as well as a colorful portrait of one of its most celebrated and at times denigrated practitioners.