Mike Hammer: The Will to Kill 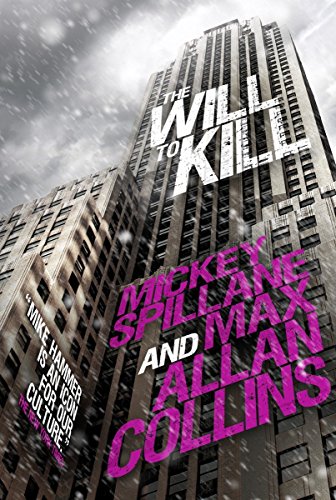 “the best example of the hardboiled crime noir novel . . .”

“What is it about me that attracts death? What turns a reflective moment at the waterfront into a crime scene?”

This is Mike Hammer’s question as page one of this novel opens with the main character standing beside half a corpse frozen onto a slab of ice washed up from the Hudson River.

The semi-body turns out to be Jamison Elder, butler to Chester Dunbar, an ex-cop turned inventor, now millionaire, and a friend of Mike’s buddy, Pat Chambers. Dunbar recently died of a heart attack but with his employee’s death, Pat’s cop-senses are tingling.

Mike tags along when Pat goes to the Dunbar estate to speak to the family. They’re a dysfunctional group, described by Pat very unflatteringly.

“Two are bums, one’s beautiful, and one’s a congenital idiot.”

The bums are Dunbar’s stepsons, Dex, a man with real money trouble, and Wake, a successful artist. The beautiful one is Dorena, his daughter, and the other is Chickie, Dunbar’s son, a twenty year old with a mind half that age.  Jamison was not only the butler but also Chickie’s caregiver, a job now falling to Willie Walters, the estate’s gatekeeper.

Mike soon learns Dunbar’s will is very stringent and unusual: no one gets his inheritance until his 40th birthday, for which each heir is impatiently waiting. Jamison was also in for a large slice of the pie but his death reverts it back to the others.

He also learns an odd fact about Chickie: Dunbar never had the boy evaluated so it’s not known what his exact mental problem is, and his will specifies that on Chickie’s 40th birthday, and only then, is a doctor to examine him.

Because Jamison’s death occurred in Sullivan County, the investigation is kept upstate, taking it out of Pat’s jurisdiction. Further, the State Police don’t seem interested in the “accident” because they’ve another, more pressing investigation going on, of several young women having disappeared.

As a result, Mike is hired by his friend to investigate not only Jamison’s death but Dunbar’s also.  When he returns to the Dunbar home, it isn’t long before he finds himself being placed on retainer by each of the family. . . . Wake to find out if his wife is trying to kill him to get his share of the inheritance, Dex to learn if the man to whom he owes a large gambling debt has decided to cancel his markers the hard way, and Dorena to discover if her father was actually murdered.

Though each Dunbar is also currently a suspect, there are others who might’ve wanted to do in both Jamison and Chet, specifically Jamison’s former employer who had a running feud with Dunbar over some items each claims to have invented.

It isn’t long before Hammer is up to his neck in tough characters and beautiful women with another murder or two thrown in for good measure. He’s also getting closer to the truth Chet Dunbar tried to hide . . . if a “homicidal maniac with a will to kill” doesn’t decimate the rest of the family first.

Mickey Spillane’s writing is sometimes considered the best example of the hardboiled crime noir novel. In taking on the Herculean task of completing the unfinished manuscripts left behind by his death, Max Allan Collins, to whom the author turned over his work files, has done an excellent job of finishing this novel in the master’s voice.

There are beautifully descriptive moments in this narrative, revealed during Hammer’s inner reflections, as well as typical flashes of dark humor. Though anyone familiar with the Mike Hammer stories may guess the villain far before the hero’s own dénouement, the solving of the Dunbar murder as well as another crime mentioned peripherally and the fitting together of the two will come as a definite surprise. All the sex, violence, terse dialogue and wry retorts generally found in these stories is still present, making it difficult to see where one author’s style stopped and the other’s began.

The Will to Live is an excellent novel of its genre, and typical Spillane. This new series of stories, with author Collins picking up where his friend and mentor left off, is introducing a famous favorite to a new generation of mystery readers.