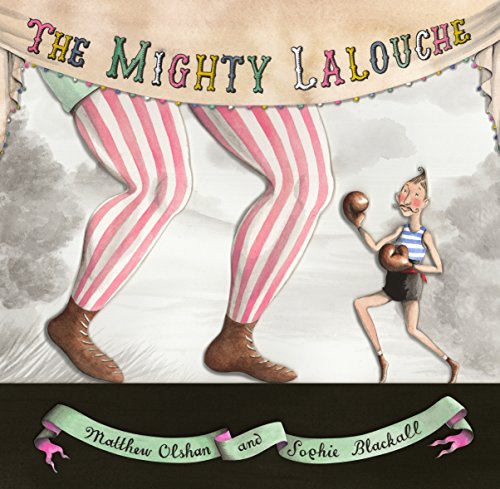 I never ask myself if I will like it because I have no choice. My third grader, who is reading 300-page chapter books by herself, still loves being read to before bed, so I'm going to have to read it whether I like it or not. Groan.

Note upstairs: Please do not make me suffer unduly. If I have ever done anything right in my life, please at least make the book short. And then I can hide it when I am done. Or donate it.

So imagine my surprise when I so enjoyed this picture book that I not only loved reading it aloud, I actually found myself adopting a French accent to add vérité to the delightful content and absolutely charming illustrations.

OMG. I do believe I am gushing!

The Mighty Lalouche is that rare book in which text and illustrations are perfectly matched and equally whimsical and delightful, and the story has enough zingers to make both reader and co-reader laugh aloud. The story is about a very French postal carrier who loves his job, but finds himself sacked when he is replaced by a fleet of electric autocars because "A walking postman's far too slow."

Desolate and desperate because without a job he will lose both his cruddy little rented room as well as a place for his beloved bird, Lalouche answers an ad for The Bastille Boxing Club. Despite the doubting Thomas boxing manager, one Diamond Jacques, Lalouche signs himself up. So skinny and short in stature that he fits only into the children's size gloves and booties, Lalouche is about to embark on a new career of being a punching bag.

The boxers all laughed when they saw Lalouche.
"Ill zap him!" cried Ampère.
"I'll pound him to a pulp," said the Piston.
"But first, I'll tie him in a pretty bow," said the Grecque.

Main non! Lalouche pulls some tricks out of his boxing gloves and manages to beat all three of his massively talented opponents. And this is where Ms. Blackall truly shines. Her understated, retro-feeling illustrations in colored pencil and ink are so on target and multilayered, adding so much subtle meaning to the text, that she must have had a hard time keeping her pen strokes clean because she was cracking herself up.

Seriously. You will root for consummate underdog Lalouche as he conquers one challenge after another. He even gets a well deserved reward at the end.

And don't forget the endpapers! My co-reader and I were so sad for The Mighty Lalouche to end that we scoured every word of the endpapers and even read the nonfiction backstory at the end—and the author and illustrator bios!

We made a fun game out of reading the player cards and deciding which one most resembled people we loved. My daughter chose "The Anaconda" as the card most representative of her skills. I like to think that my immediate choice of "The Misanthrope" beat my daughter to it.

Of course it did not hurt that by the second page of the story it became clear that Lalouche's pet bird was obviously named after my daughter, Genevieve (sans l'accent aigu).

A gem of a book! Bravo! Encore!