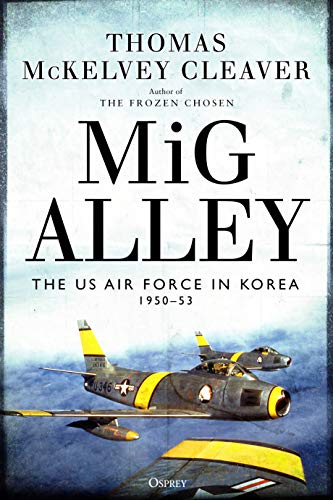 “This major new work on the first aerial campaign of the jet age is highly readable revisionist history.”

The Korean War has a reputation as the forgotten American war of the late 20th century. This had been especially true for the air campaign over the peninsula, which saw the first wide-spread use of jet aircraft in combat. The official U.S. Air Force history for the  next 50 years maintained the narrative that America dominated the skies over Korea, especially over the area labeled MiG Alley just south of the China-North Korean border. The Air Force proclaimed that it’s new F-86 Sabre jet accumulated a better than 10-1 kill ratio over the Soviet built MiG-15s flown by their adversaries and that American aircraft and pilots dominated throughout the entire war.

However, as this book shows, the truth is a bit more complicated. Using new available Russian and Chinese archives, Cleaver describes a much harder fought aerial campaign where American pilots, many with World War II combat experience, were in fact fighting against equally combat experienced Russian pilots over North Korea from 1951 into early 1952.

The author clearly has a deep knowledge of aviation technology in this transitional time. All major air forces in the early 1950s were beginning the transition from propeller to jet powered aircraft, and both types of aircraft were used in combat by both forces through the early part of the war. However, as jet fighters began to dominate the skies over North Korea, the remaining propeller aircraft were soon relegated to providing close air support south of the 38th parallel. The need to adapt to new technology also drove a need to develop new doctrine and tactics, and both sides were constantly attempting new means to gain air superiority.

The author also explores several other operational topics not heavily discussed in official histories of the war. First, the U.S. Air Force daylight strategic bombing campaign, so much a part of their World War II mystique, became tactically untenable in the skies over North Korea. The vaunted B-29 bomber which ruled the skies over Japan in 1945 had by 1951 become highly vulnerable to jet fighters and suffered significant combat losses. After a fairly short but costly campaign, the Air Force was forced to switch to night area bombing, and the author points out that Russian pilots were able to do what the Luftwaffe could never achieve over the skies of Germany: stop American bombers from their daylight bombing campaign.

The rest of the war was basically inconclusive from an aerial perspective. The Russians gradually withdrew their pilots, replacing them with less experienced Chinese and North Korean pilots who nonetheless gave a good account of themselves. The American and Allied air forces serving under United Nations command controlled the skies over South Korea for the better part of the war but could never truly establish the sort of air dominance over North Korea they would achieve in later conflicts. For the Americans, the air war became a propaganda theater as Air Force pilots competed to become the first jet aces, and then to become the highest scoring jet ace of the war. Cleaver chronicles this race as well, highlighting the sometimes outlandish egos and exploits of these jet-age knights of the air, including crossing into the forbidden territory of Manchuria to attack Chinese fighters at their bases.

The one aerial campaign the author does credit with making a major strategic contribution to the UN war effort was the destruction in early 1953 of the stockpiled Communist supplies intended to support one final offensive before the anticipated armistice. This bombing campaign blunted the final push planned by the Chinese to seize strategic territory prior to the June 1953 armistice.

This major new work on the first aerial campaign of the jet age is highly readable revisionist history. The author’s analysis that shows an actual kill ratio of 3:2 between the American and Communist air forces in favor of the USAF actually shows how bitter and hard fought these battles were for control of the skies. The overall ability of the American and Allied pilots to adapt to challenging combat situations prefigured the doctrine, training, and tactics that would lead to the  dominance of Western air forces over their opponents in later 20th century conflicts. This is a great read to understand the technology, personalities, and actions of these first big jet battles of the 20th century.