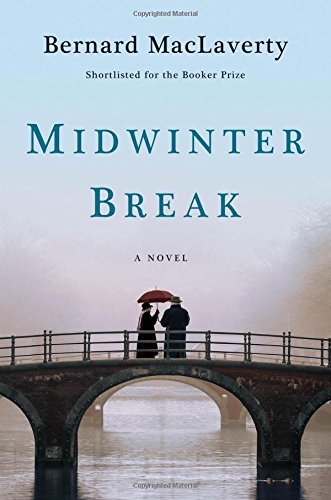 “MacLaverty’s novel is compelling, and resonant. It is a beautiful, thoughtful, finely detailed portrait of two individuals and their marriage.”

The plot of Midwinter Break is deceptively simple. Gerry and Stella, who are around 70, retired, and have been married for over 40 years, leave their home in Glasgow to go on a four-day holiday to Amsterdam. However, the story and many of the issues explored in the novel are anything but mundane. Gerry is an alcoholic and Stella is considering leaving him to join the Beguines, a Catholic sisterhood, which Stella believes will be a sanctuary, located in Amsterdam.

Midwinter Break depicts a highly-nuanced portrait of Gerry’s and Stella’s marriage. While Gerry has a serious drinking problem, he is deeply devoted to Stella and loves her. Their marriage is tried and tested and is sustained, in part, by the rituals and habits of older couples. Gerry and Stella are also linked by Stella’s shocking and traumatic “accident” when she was heavily pregnant with their only child, and they survived and escaped from the “troubles” in Northern Ireland and relocated in Scotland together forming a strong though fraught bond.

But Stella and Gerry also possess significant differences. Stella is a devout Catholic, while Gerry is a skeptic. A former school teacher, she is compassionate and above all wants to help others and do good. Gerry is a retired architect with a more cynical mindset. Despite these differences and their problems, Gerry and Stella are usually very loving and considerate of one another. While in Amsterdam, they enjoy visiting museums and eating out together; they hold hands, make love, and engage with and care for one another.

Although Gerry’s alcoholism affects his behavior and treatment of Stella, he is not portrayed as a villain. While Midwinter Break employs a third-person narrator, it shuttles back and forth between Gerry’s and Stella’s perspectives. The narrative allows Gerry and Stella their points of view on their adventures in Amsterdam as well as reminiscences and individual perspectives on past experiences.

For instance, the narrative moves between Gerry’s and Stella’s memories of the “accident,” helping the reader put together what occurred and showing how each responded to the event. The two perspectives help create sympathy for each character and illustrate both why they have stayed together and what might break them apart.

Midwinter Break is written with grace and clarity. MacLaverty’s descriptions are resplendent in details and astute observations about the settings and characters. While waiting in the Amsterdam airport for a snow-delayed flight, MacLaverty describes Stella looking out the window at the storm: “The blizzard outside continued slanting across the airport. Stella sat mesmerized watching the relentlessness of it. It was visible mostly in the haloes of lights, the nearer the more defined. Some sodium lights made yellow of it, ordinary ones made it blue-white. Always agitated, streaking and swirling.”

The title Midwinter Break is perfectly pitched to the novel. It refers to the vacation that Gerry and Stella take in the middle of winter, but it also it also suggests a potential break or shattering of their relationship during this time. Midwinter, or the time of year, also alludes to their ages or time of life. Though quiet, MacLaverty’s novel is compelling, and resonant. It is a beautiful, thoughtful, finely detailed portrait of two individuals and their marriage.