Midnight in the Pacific: Guadalcanal—The World War II Battle That Turned the Tide of War 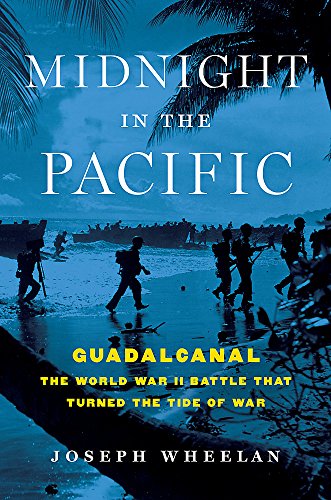 “The author’s assertion that Guadalcanal, not Midway, was the turning point of the Pacific War is hard to dispute . . .”

Guadalcanal was not only the pivotal campaign in the Pacific War, marking the first of a long series of brutal island campaigns leading to America’s eventual victory, it is a story of the courage and spirit of American Marines, sailors, soldiers, and airmen fighting against long odds to end the myth of the Imperial Japanese military’s invincibility.

This new book on the campaign, published to coincide with the 75th Anniversary of the Marine landing in 1942, is the first major book length history since historian Richard B. Frank’s seminal work published in 1990 and benefits from a great deal of recent scholarship.

The fighting around Guadalcanal was an early example of joint operations at their finest, where Marines fought bitter ground battles to hold onto the island’s only airfield, Henderson Field, so that aviators could control the waters around the island during the day to allow Navy vessels to keep the Marines and airmen supplied. The interconnected nature of the air, land, and sea battles around the island are excellently laid out by author Wheelan, who moves between the land, sea, and air battles with a narrative flair.

The author does an excellent job of highlighting the desperate fighting on all fronts, where the Japanese often had numerical superiority as America geared up for worldwide war but was not yet fully mobilized. The often shoe-string nature of the operation may surprise many readers accustomed to tales of American material and martial prowess in World War II.

While this might have been true for the climatic campaigns of 1944–1945, for the first four months of this campaign, the U.S. Navy committed nearly every available ship in the Pacific Fleet to the bitter naval battles around the island, and at one point in the campaign, the Navy was down to one operational aircraft carrier and a handful of cruisers and destroyers to fight a heavy Japanese naval offensive.

The naval and air battles described in the book definitely benefit from recent works by naval historians like James D. Hornfischer. Readers may also be surprised to learn that the U.S. Navy suffered over three times the casualties as the Marines in heavy naval combat around the island as both the American and Japanese navies each lost 24 ships sunk during the six-month long campaign.

The land battles were marked by not only the courage and fighting spirit of the First Marine Division in its first major campaign, but the overconfidence and inflexible tactical planning of the Japanese Army, which consistently conducted poorly planned and organized attacks on the well dug-in Marines.

Both the Japanese army and navy had a serious case of “victory fever” after their rapid conquest of most of East Asia in 1942 and not only underestimated the Marines’ tenacity, but the level of American firepower the Marines and airmen could bring to the defense of their perimeter.

Leadership also played a key role in the battle, with the pivotal command decision of the entire campaign coming in October 1942 when ADM Chester Nimitz relieved VADM Robert L. Ghormley with VADM William “Bull” Halsey. Halsey’s fighting spirit and willingness to take huge risks with his diminished naval forces provided the key difference in the naval battles of October and November 1942 that halted Japan’s last two efforts to recapture the island and its critical airfield.

This is a very quick and satisfying read, with just the right amount of detail, narrative history, accounts from participants, and analysis of the decisions made by key leaders on both sides to give a balanced account of the campaign.

The author’s assertion that Guadalcanal, not Midway, was the turning point of the Pacific War is hard to dispute. When the Japanese evacuated their remaining starving and outnumbered troops in early 1943, their navy no longer enjoyed tactical dominance, their airpower had been decimated by the loss of experienced pilots, and their army was shown to be no longer invincible. The fighting around Guadalcanal changed the tide of the Pacific war as the Japanese went on the strategic defensive and could never again seriously challenge American maritime or air power in the Pacific.