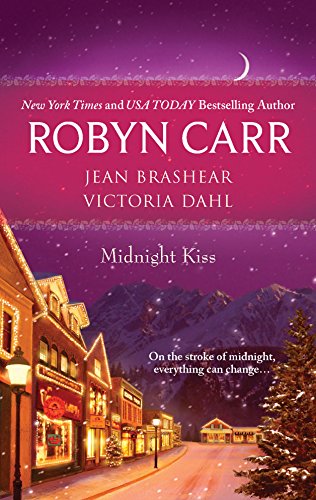 Mistletoe, long evenings beside warm fires, even the inevitable eggnog-related indiscretion: It’s no wonder that romance jumps on the holiday bandwagon like no other genre. Publishers especially like holiday-themed anthologies, serving to both launch new authors and introduce readers to long running series they might not yet have tried (or not know where to start). Midnight Kiss does both, with a bit of a twist, focusing on New Year’s Eve instead of the traditional Christmas story.

Robyn Carr anchors the anthology, opening with “Midnight Confessions,” set in her long-running Virgin River world. Part military, part small town America, this series focuses on an isolated village, set high in the mountains, with more than its fair quota of happy couples. In fact, the major drawback of this story is those happy couples—Carr falls headlong into the post-happy-ever-after-ending trap often seen in continuing series, where all characters from all previous books must somehow pass through the narrative to display not only their continuing joy, but also their fecundity, and previous characters are named, as are their many (many) children. Lacking only a “as seen in Virgin River novel X” tag, these families add very little value to the series and enormous amounts of schmaltz.

Coupled with a slow build and too past-heavy focus, the parade of characters past leads to an overall anemic story, which is a shame, really, because Carr otherwise manages to create what is sorely lacking in many romances today—namely a sense of connection and understanding between her characters that goes deeper than physical attraction. The vast majority of interaction between Drew and Sunny is through dialogue, displaying a subtlety and grace of writing rarely seen in shorter pieces. The end result is an easy belief that these two characters have forged a lasting link beyond a chance meeting.

If there is such a thing as romance reader kryptonite, newcomer Jean Brashear taps into it with “Midnight Surrender” and a hero with an Irish accent. We readers aren’t supposed to play favorites, but there’s something about a hero with a lilt. Add into the mix that he’s handsome (naturally), handy, and willing to take on a very difficult heroine because he sees her inner pain, and we’ve got a blueprint for a tearjerker of a tale. While Brashear occasionally takes Jordan’s “man-eater” characterization to the extremes, with Will being just a bit too understanding, compassionate, and sympathetic for strict realism, watching their interaction and character growth is a lot of fun—and may necessitate a tissue or two.

The final story in Midnight Kiss is the strongest, providing a satisfying ending to the anthology. Victoria Dahl investigates the exciting world of bank takeovers (no, really) in “Midnight Assignment,” throwing together two characters with a past, who desperately want to get through the present so as to avoid each other in the future. Dahl is a relative newcomer, but definitely a name to watch in both contemporary and historical romance, and this novella demonstrates why: It’s sexy and engaging, with a solid emotional punch.

Short stories in romance anthologies require a different skill set than that for writing novels, and many authors fall short (if you’ll forgive the pun) of their goal—that is, they are unable to create a believable relationship with the truncated page count.

Midnight Kiss proves an exception, however, as each author is able to build a credible romance, and therefore contribute to what is, on the whole, an enjoyable, if not ultimately memorable, holiday read.