Midnight Hour: A Chilling Anthology of Crime Fiction from 20 Authors of Color 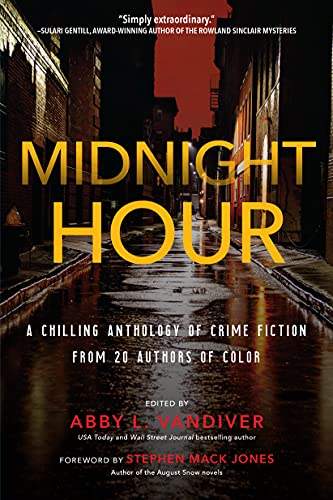 “Midnight Hour operates from a stimulating conceit: an anthology of 20 crime stories, all taking place at midnight, all written by writers of color.”

Midnight Hour operates from a stimulating conceit: an anthology of 20 crime stories, all taking place at midnight, all written by writers of color. Editor Abby L. Vandiver has assembled a wide range of styles and moods, ranging from near farce to blackest noir, and although the results are hit-and-miss, the freshness of the concept remains intriguing throughout.

The better entries in the collection spring some unexpected twists. The opening story "Lucky Thirteen" by Tracy Clark charts a home invasion by a would-be murderer, only for the tables to be turned in unexpected fashion. A killer-for-hire scheme in Vandiver's "The Bridge" goes awry when it's revealed that the killer has an unusual relationship with the victim. Jennifer Chow’s “Midnight Escapade” finds two old high school friends reuniting for an evening in an escape room, only one friend isn’t quite who she seems. Roald Dahl and Alfred Hitchcock aficionados will get a charge out of Faye Snowden’s “Chefs,” in which an adulterous couple get revenge on a restaurant owner in ghoulish fashion.

Other tales in Midnight Hour generate a vivid impression through ethnic or racial undertones. In Christopher Chambers’ semi-comic “In the Matter of Mabel and Bobby Jefferson,” an African American call center insurance agent has a racially charged conversation with a client, even as suspicions of deceit and murder percolate beneath their banter. In Marla Bradeen’s “The Witching Hour,” historical tragedy and DNA testing collide as a Vietnamese American woman discovers an unexpected connection between a friend and her refugee father.

History also plays into David Heska Wanbli Weiden’s “Skin,” a sharply drawn vignette in which a pair of ne’er-do-well Native Americans attempt to steal a centuries-old book that was created using Indian skin. Discrimination of another sort colors Delia C. Pitt’s “Midnight Confidential,” in which a Black female cop gets back at her oppressors in the workplace by furthering her own criminal interests right under their noses. On the lighter side, Raquel V. Reyes’ “Mata Hambre” provides a carnivalesque view of Miami’s Cuban community, as a local sandwich-eating contest devolves into a whirlpool of jealousy, love triangles and pandemonium.

The bulk of Midnight Hour is devoted to more conventional stories, many of which sadly fail to leave much of an impression. Frankie Y. Bailey’s “Nighthawks” hinges on a fraught premise—a Black witness to a crime insists that the perpetrator was white even though others on the scene claim otherwise—but fails to follow through with a satisfying conclusion. In Tina Kashian’s “Cape May Murders,” two traveling housewives play detective when a murder occurs in their B&B; apart from the protagonists’ ethnicities (Armenian and Indian), the story is rote. Stella Ogni’s “The Black Widow of Oshogbo” presents a hunt for a serial killer in an intriguing setting of back-water Nigerian villages, but as is the case with many of Midnight Hour’s straightforward tales, the set-up is more compelling than the execution. A happy exception is Gigi Pandian’s “The Diamond Vanishes,” a whodunit that becomes a whydunit when a group seance leads to a disappearance. Breezy and ingratiating, Pandian’s polished prose references locked-room mysteries and Indiana Jones-style mysteries before settling on a wry conclusion.

Most memorable are the entries that defy easy genre classification. Elizabeth Wilkerson’s “Change of Plans” might be set in Tokyo, but the locale is incidental to the story’s dark comedy, as an obsessive-compulsive protagonist struggles to get her planner book updated before midnight rings in the new year, with disastrous consequences. E. A. Aymur’s “The Search for Eric Garcia” ventures into more existential territory as the search for an adulterer turns inward and reflects back on the pursuer. Most surreal of all is H. C. Chan’s “Murderer’s Feast,” in which a venial tech entrepreneur invites a group of people who he’s wronged to a bloody week of hunting, humiliation, and carnage, as personal viciousness intermixes with visceral violence.

As a smorgasbord of crime writing, Midnight Hour is erratic, but if it isn’t as consistent as it could have been, it’s still a rare opportunity to sample multiple minority voices, and at its best, it shows how unique points of view can freshen up even the hoariest of genres.