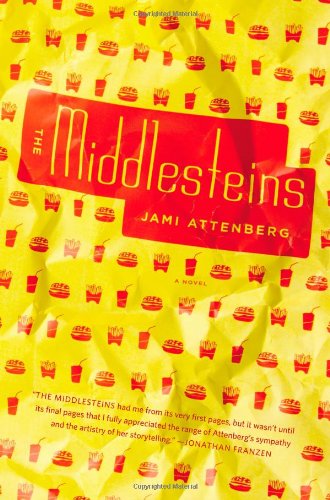 “The Middlesteins will appeal to middlebrow readers . . .”

Jami Attenberg’s The Middlesteins describes a suburban Midwestern Jewish American family that finds itself in crisis when its morbidly obese matriarch’s health begins to fail.

It becomes clear to all family members except herself that her compulsive eating is killing her, and her husband of 30 years moves out. The novel’s nonlinear mostly third-person narrative (the one exception is the third from last chapter which is told in the first-person plural) is told from multiple perspectives with mixed results.

The novel’s greatest shortcoming is the quality of its prose which is at best serviceable and at worst pedestrian seasoned with purple similes such as “. . . the guilt boiling in her stomach like an egg in hot water . . .” A close second is Ms. Attenberg’s tendency to tell rather than show.

The book’s greatest strength is the portrayal of its male characters whose minds Ms. Attenberg insightfully inhabits and brings to life.

But that strength contrasts with her two-dimensional female characters in whose chapters her writing is weakest. Perhaps she assumes Jewish American women readers will recognize her female characters and identify with their situations thus rendering further psychological exploration and indeed depth superfluous.

The Middlesteins might be stronger had Ms. Attenberg analyzed and deconstructed familiar assumptions and phrases rather than simply mentioning them and expecting her readers to nod in recognition.

For example the phrase “Food is love, love is food” will be familiar to anyone who has or had a Yiddish speaking mother or grandmother (and probably members of other ethnicities as well), but neither Ms. Attenberg’s narrator nor her characters explore the phrase’s origins or what it means to each subsequent generation of hyphenated Americans.

Their children include an angry, sullen, single, schoolteacher daughter Robin, who, unlike the other characters lives in Chicago rather than its suburbs; their easy-going, pot-smoking son Ben, an accountant who suddenly starts going bald and who shares a nightly joint in their backyard after the kids are asleep with his uptight, perfectionist wife Rachelle, a stay at home mom whose preoccupations are their twins’ upcoming B’nai Mitzvah party preparations and her mother-in-law’s failing health; and the twins themselves, conceived unexpectedly when their parents were still undergraduates and who now spend more time rehearsing dance moves for their B’nai Mitzvah party than the rituals they will perform in synagogue: Emily, who has inherited her aunt and grandmother’s moodiness; and Josh who emulates his father’s affability.

Ms. Attenberg deftly describes that party in the collective voice of Edie and Richard’s friends, “the Cohns, the Grodsteins, the Weinmans, and the Frankens,” a voice that resembles a Midwestern version of Fran Drescher’s and a description of suburban excess told from the perspective of sympathetic yet nonetheless aghast (at Edie and Richard’s uncivil conduct toward each other) insiders.

When Richard leaves Edie he does not anticipate being cast in the role of a villain who abandons his sick wife, nor that Rachelle will forbid him to see his grandchildren.

What Rachelle doesn’t know is that Edie never viewed Richard as her equal—she despised him—and their marriage has been loveless and sexless for decades.

Yet Rachelle and Robin prove no more successful in their attempts to persuade Edie to adopt a healthier lifestyle than had Richard.

Edie and Richard eventually find new romantic partners. Edie’s is Kenneth, the Chinese American chef of her favorite restaurant, and in a dubious digression most of the penultimate chapter is devoted to his backstory.

Edie is Kenneth’s most appreciative customer and uses her legal acumen to save the restaurant, but are readers to believe that Kenneth can simply overlook her compulsive eating and consequent failing health?

The Middlesteins will appeal to middlebrow readers who will enjoy its recognizable characters described in a familiar, colloquial idiom. The book’s nonlinear structure, multiple perspectives, and occasional page-and-a-half long paragraphs suggest, however, that its author aspires to a literary level her writing sadly fails to achieve.