Mickey Spillane's From the Files of . . . Mike Hammer: The Complete Dailies and Sundays Volume 1 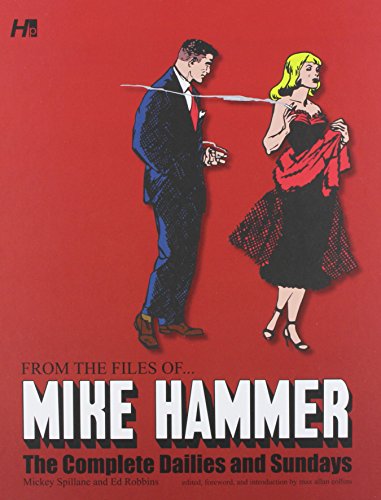 With a writing style that was direct, blunt, forceful and filled with dirt and color just like a street in NYC after the rain, writer Mickey Spillane revolutionized the paperback industry.

His first Mike Hammer novel, I, the Jury debuted in 1947 in a hardcover format. When a paperback version hit newsstands and spinner racks at bus stations and drug stores a year later, sales skyrocketed.

As a hero Hammer is a no-nonsense guy who trusts no one, has little time for dishonesty or diplomacy, and seldom turns down a willing woman. Mr. Spillane’s Hammer novels contain brutal violence with reoccurring themes of vengeance. Sex and women are often portrayed in a very frank and direct manner.

Critics of the day raked him over the coals. But his books sell in the millions. Mr. Spillane may not have written with the style, grace, or the relative subtlety of Dashiell Hammett or Raymond Chandler, two respected authors who could give him a run for his money in sex and violence, but he knew what people wanted to read.

With this success Mr. Spillane found himself in demand everywhere. Much of this work was licensed out and even when he wanted to, Mr. Spillane wrote none of it. There was only one other format in which he personally contributed to Mike Hammer: newspaper comic strips.

He provided outlines and assisted in the dialogue while Joe Gill and artist Ed Robbins worked on the details. But Mr. Spillane’s inimitable style is still on almost every page. With his prose complimented by the very direct and shaded stylings of artist Ed Robbins, these strips stand their ground with the best of Mr. Spillane’s novels.

The strip began in 1953 with incredible promise. The very first daily opens with the rain falling, a woman leaning over a body on the street, and Mike Hammer’s memorable greeting to her, “Friend of yours, kitten?”

The strip closed down a year later in 1954 when public outcry over a single panel erupted into controversy. As he had in the Hammer novels, Mr. Spillane wrote his newspaper strip with the same style and feel for what the public wanted to see. But novels and newspaper comic strips are two different things.

The panel in question depicted a woman tied to the bed, her mouth gagged, a lone tear falling across her cheek. Her head is turned to the door and her eyes seem to be praying for rescue before the brute holding a cigarette pushes the lit end into her exposed heel.

Mr. Spillane may have been America’s most successful author in his day, but to portray such explicit action in an American newspaper was going too far.

The next two panels show the same action from two more angles. Then Hammer takes a blackjack to the back of his head. Next frame shows the man he was working with throwing the torturer out the window of a highrise apartment building, the criminal falling dozens of stories to his death.

What a sequence! Today we see much worse on an episode of “C.S.I.” But in 1954 this was an abominable scene for those with such delicate sensibilities to witness.

The Spillane/Mike Hammer names are the reason that many will pick up this collection. But they will find themselves staying because of the amazing style of artist Ed Robbins, an unsung and nearly forgotten craftsman with spectacular skill.

His city streets glisten under brilliant streetlights. But every shadow holds menace. A country scene may sing with bucolic peace, but there is always a murderer with a shotgun lurking around the corner. He fills the private eye Hammer with a street-worn nobility. When someone needs to be punched, and this happens often, the action is so sudden and life-like that you find yourself subconsciously. Mr. Robbins is a master of how to exactly set a thrilling scene.

Mr. Spillane’s choice of Mr. Robbins as the artist for his strip was no accident. In his early days as a writer, before he had gone off to war, Mr. Spillane wrote for comics. In fact a prototype of Mike Hammer (as “Mike Lancer”) first appeared in an issue of The Green Hornet back in 1942. Mr. Spillane knew his art and he knew the artists who were good.

Hermes Press’ collection of complete dailies and Sunday edition strips is filled out with an exceptional amount of extras. There are movie posters, rarely seen panels of original art, and a complete story of the restoration of these pages. Even though the art is 60 years old, each panel looks nearly new.

Award-winning mystery author Max Allan Collins has not only written a very personal introduction but also contributes a history of Mike Hammer through the decades.

Once, Mr. Spillane’s work was considered a low point in American literature. But today his writing is now receiving praise from almost every literary corner. Fans of timeless detective writing will be thrilled to find these stories for the first time. To be able to read them all in one place is a fan’s dream.

Mr. Spillane’s apprenticeship as a writer was in comic books. And Mickey Spillane was a very loyal man. He made a lot of friends when he was writing for studios that created comics directly for publishers. When the chance came to produce a Mike Hammer newspaper strip, Mr. Spillane could have gone to a large syndicate, but he chose to stay among his old friends.