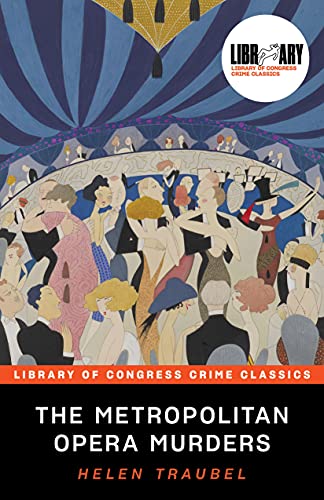 “While the story may seem convoluted it really is a good read with intricate twists and turns that only add to the tale.”

As one of her characters puts it: “An opera house is a strange place—a melting pot of nationalities and temperaments . . . Music is the common denominator that keeps us working together in some degree of harmony.”

Traubel’s protagonist is Elsa Vaughn, star soprano best known for her roles in Richard Wagner’s many operas, not unlike Traubel herself. The story opens with the death of Rudolph Salz, not a member of the company—an ex-tenor, mentor, and “the most ill-humored person, . . . a vitriolic, sarcastic tyrant” and now a prompter—and of course the death occurs during a performance of Wagner’s Die Walküre.

It doesn’t take long for the police to determine that Salz’s death was no accident. Lieutenant Sam Quentin is on the scene and as he interviews the members of the company, he quickly surmises that perhaps the real intended victim is Elsa. It seems that a bottle of whiskey purchased for her is laced with poison. Add to that fact that there have been several attempts on Elsa’s life, and Quentin is convinced.

As the interviews continue, the suspects line up—Dave Lang, Elsa’s publicity man; Howard Stark, her business manager; Karl Ecker, the Heldentenor; Hilda Semple, the second soprano in the company. And these are just the people directly impacting the company.

Add to this group Edwina DeBrett, the wife of wealthy stockbroker Stanley DeBrett and stepmother of Jane DeBrett. Stanley wants out of the failing marriage, but Edwina holds something over him and is not about to let go of the purse strings. Jane wants to be a singer and is mentored by Elsa, but Jane’s father is against her choice of career.

And now a murder from two years earlier resurfaces. Stanley DeBrett’s sister, Ivy, was murdered and the family jewels disappeared, never to be seen again. That is, until Jane DeBrett tries to pawn one of the jewels to pay for her budding career.

Now how does Ivy’s death play into Rudolph’s? The authorities reopen Ivy’s case and discover a stash of family jewels hidden in Stanley’s home. But wait . . . Traubel has more in store for the reader. Ivy’s husband was Karl Ecker; Jane DeBrett is falling in love with Dave Lang; the police have arrested Stanley DeBrett for his sister’s murder; Edwina is having an affair with Karl; Karl is having an affair with Hilda.

As difficult as it may seem, Traubel does a good job of keeping the story moving in a logical direction. Jane is attacked, Elsa is attacked, Stanley is arrested a second time, and then Hilda Semple is murdered in Elsa’s dressing room at the theater with the same gun that killed Ivy DeBrett Ecker. Traubel begins to tighten the strings around the story with the requisite climax scene, where the real culprit is uncovered.

While the story may seem convoluted it really is a good read with intricate twists and turns that only add to the tale.

It should be noted also that there are footnotes throughout the story. While this is not a normal format for novels, and can be distracting, these notes are informative primarily about operas in general and singers in particular, and they educate as well as add to the intrigue.