Everything You Want Me to Be: A Novel 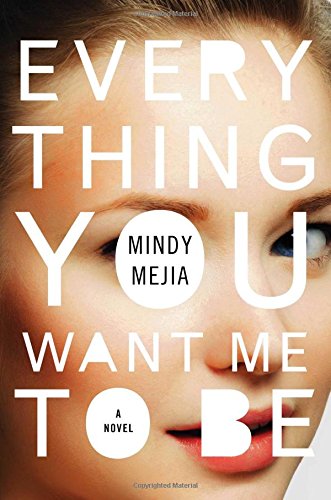 Everything You Want Me to Be starts in March 2008 with young runaway Hattie studying the departures board at the Minneapolis airport. For a variety of reasons, Hattie changes plans and ends up getting stranded in the “middle of nowhere” back near Pine Valley.

“I was so happy—so free and above it all—when I started senior year last fall,” she thinks. “That Hattie was ready to take on the world and she would have, damn it, she could have done anything. And now I was a pathetic, sobbing mess. I had become the girl I’d always hated.”

And then Hattie, a.k.a. Henrietta Sue Hoffman, comes up with a plan. She wants to leave a mark.

A few weeks later, Sheriff Del Goodman finds a body of a dead girl in an abandoned barn. The body is “half floating in the lake water that flooded the lowest part of the sinking floor.” Del knows he’s got problems, particularly when he worries that the body might be that of a teenager who has been reported missing by her father, a family friend. “Girls didn’t murdered for nothing,” he thinks, “not in Wabash County.”

Next we flip back to August 2007 and meet a 26-year-old Peter Lund, who is in the middle of an uncomfortable evening with his wife, Mary. Stress and strains abound in Peter’s life, including the time-consuming attention that Mary gives to her mother, whose health is failing. There are chickens involved with the mother-in-law and Peter wants nothing to do with chickens. He’s a Minneapolis guy.

The couple had moved to Pine Valley to be closer to Mary’s mother when Mary spotted a teaching job for Peter. Now Peter feels trapped. Peter is worried about the “too generic” nature of his wedding vows. And Peter meets a young clerk at the drug store and instantly recognizes her confidence. She’s someone who sees the world as “giant cupcake” for her consumption.

Then we stay in August 2007 and see how Hattie’s senior year started and, right off the bat, we get a chilling glimpse into Hattie’s true character. She’s an actress—and a good one. She thinks: “Sometimes I think acting is a disease, but I can’t say for sure because I don’t know what it’s like to be healthy.” (What a great line.)

Peter is directing the spring play, Macbeth. And Hattie, naturally, lands a major role. And Hattie starts exchanging private messages in an online forum with someone named “LitGeek” and you won’t have any trouble guessing who “LitGeek” is and what kind of train Peter is riding—and how hard it is going to crash.

There are shades of the Alexander Payne flick Election and the plots from hundreds of novels involving teacher-student romances. Mindy Mejia treads where many have ventured before.

But Mindy Mejia knows how to build an exquisite sense of tension, and she puts complex characters in palpable jeopardy. The inter-spliced then and now plot requires a delicate intricacy, and Mejia works with a surgeon’s touch. Much of the plot turf is recognizable, but Peter and Hattie are both fully realized characters that lift this thriller into a darker, richer place. Del, too, is likable and full-blown, if a bit slow with his efforts. The small-town police work, with its glacial pace, is at times too convenient as a means of stretching things out. A minor matter.

Peter’s growing horror at the true chameleon quality of his pupil/lover is spinetingling, even as he continues to take what he wants. Hattie keeps “shedding masks like a matryoshka doll, each one more audacious than the last.”

Everything You Want Me to Be is a fast read with a bright, clean style. The ending should launch some ferocious debates. Mejia’s approach isn’t too deceive, only to withhold. Some readers may hope for a bolder choice of true antagonists among the smallish cast. In all, this is a gripping thriller and, once again, a cautionary tale about high school teachers getting tangled with their students, particularly ones who know how to act.