The Method: How the Twentieth Century Learned to Act 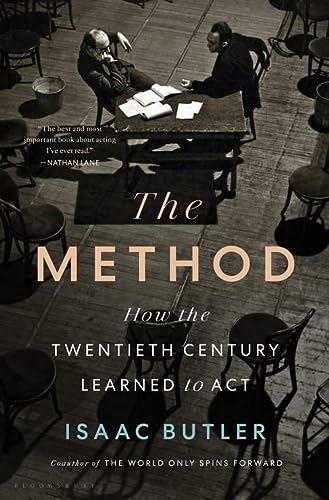 “Butler offers a fascinating history that includes appraisals of the work of actors most associated with The Method. The book is a must for anyone interested in the history of American theater and film.”

From the Group Theatre in the 1930s until the end of the last century, the history of American stage and film acting has been shaped by the acting theories subsumed under the rubric “The Method.” It shaped legendary performances like Brando’s Stanley Kowalski and Terry Malloy, both directed by Actors Studio co-founder Elia Kazan; but it also fell into disrepute because of the bad habits that were associated with it. Isaac Butler’s absorbing book traces the history of The Method from its roots in Russia in the 1890s to the present.

Butler’s fascinating account begins with a meeting of two men in a Moscow restaurant in June 1897. One was the theatrical impresario Vladimir Nemirovich-Danchenko, the other a wealthy young man who was active in amateur theatre circles, Konstantin Sergeievich Alekseiev, who performed under the name Konstantin Stanislavsky. During an all-night conversation, the men conceived the Moscow Art Theatre where, under their leadership, actors were trained in a new style of life-like acting that fit the work of rising playwrights like Anton Chekhov and Maxim Gorki. Over the years, Nemirov-Danchenko and Stanislavski would become bitter enemies, but the work of their theater became world famous.

Stanslavski the theorizer and teacher, as well as actor and director, developed a system for acting that was designed to enable the actor to give a convincingly realistic, emotionally complex, performance consistently over the run of a play. During the first stage of the rehearsal process the director and actors would divide the script into beats. The actors had to understand their character’s motivation and tactics in each beat as well as their overall objective. Actors would find emotional depth through their own affective memory and sense memory. Rehearsal periods were a time of character exploration. Stanislavski’s system reflected the interest in science and psychology at the beginning of the 20th century, as well as the focus on individualism, which became anathema in the Soviet Union.

Not surprisingly, Stanislavski’s system changed over the years as he faced and tried to surmount new challenges as an actor and director. His theories adapted to his practice, but the changes in emphasis led his American disciples to teach conflicting versions of what came to be called “The Method.”

Butler’s history focuses on the United States where Stanislavski’s ideas took hold most powerfully. Harold Clurman, who would become one of Stanislavski’s most ardent disciples in the United States, saw the Moscow Art Theatre when it came to New York in 1922. He and other young theatre artists also became acquainted with the “Method” through the writings of Stanislavski proteges Michael Chekhov and Richard Boleslavsky who presented their own versions of developing a character that differed some from that of their mentor.

How could an acting company like the Moscow Art Theatre exist in the United States, particularly in the center of American commercial theatrer, New York City? The most influential experiment was the Group Theatre, an ensemble of mostly Jewish children of immigrants who wanted to create a stable ensemble of artists who would take class together and develop plays that spoke to their times. The Group Theatre, which had a brief life during the 1930s, became through the teaching of its members, the disseminator of The Method: Lee Strasberg and Elia Kazan founded the legendary Actors Studio, Stella Adler founded her own acting school as did Sanford Meisner. These figures did not agree on the essentials of Stanislavski’s system. Nonetheless, a generation of famous actors trained by Group Theatre veterans became exponents of The Method, which became the dominant acting style after World War II: John Garfield, Montgomery Clift, Marlon Brando, Rod Steiger, James Dean, Geraldine Page, Kim Stanley, Anne Bancroft.

These actors, trained by and often directed by Group Theatre veterans supplanted the film actors who had been raised in and trained by the film studios. The goal of the studios had been to develop personae that their audience loved in film after film. The goal of the new actors was to create a variety of convincing, realistic character portrayals. The prime example of the Method was Marlon Brando in his great early films, A Streetcar Named Desire and On the Waterfront, both directed by Group Theatre veteran, Elia Kazan, who became the premiere stage and screen director of the postwar period. Much of the tension we see between Brando’s Stanley and Vivien Leigh’s Blanche is also the tension created by the clash of two acting styles: Leigh’s overwrought old-school histrionics and Brando’s new realism.

In Strasberg’s classes at the Actors Studio, actors had to lay bare their own vulnerable psyches in the process of getting to the heart of their characters. How often can one go to the darker parts of one’s personality without damaging oneself? Strasberg and The Method were mocked and attacked for the damage it did to fragile egos. The greatest method actress, Kim Stanley, became an alcoholic incapable of working. Method actors were also attacked for their lack of technique, for putting psychology ahead of audibility.

Still, many of the performers the public admired were actors who had been trained in some form of The Method. In the sixties and beyond, Dustin Hoffman became an example of an actor willing to go through months of preparation for a character.

Over the past 50 years, acting training has become more eclectic, including some version of Stanislavski’s Method but incorporating it with vocal technique, body work and preparation for acting in less realistic drama. The Method is now considered one tool in an actor’s toolbox.

Isaac Butler deftly tells the story of the time when The Method was almost an actor’s religion as well as the foundation of her work. Butler offers a fascinating history that includes appraisals of the work of actors most associated with The Method. The book is a must for anyone interested in the history of American theater and film.