The Mermaid of Warsaw and Other Tales from Poland 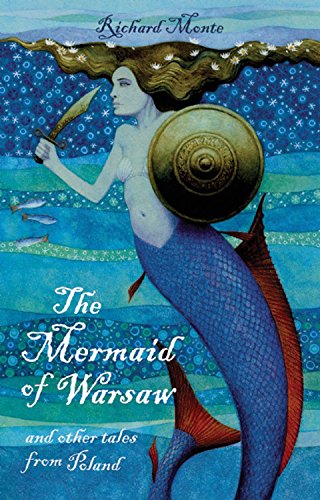 “Enlivened by expressive drawings that evoke Old World places and people, The Mermaid of Warsaw is a collection worth dipping into.”

A card-playing salt-mine ghost, a green fish that becomes a prince with a palace of shimmering shells, and a hunchback whose magic fades too soon inhabit this refreshing but uneven collection of eight folktales from Poland.

Seasoned with humor and local color, these stories trace the fates of both the humble and the puffed-up potentates of Central Europe. In the title story, three fishermen encounter a mermaid whose body glistens with turquoise scales. They set out to capture her for the local princes, who will surely reward them with a big bag of gold. If only they had followed Father Barnaba’s advice: “Remember to put wax in your ears. . . . If you hear that weeping and wailing sound when you catch her, it’ll be game over. She’ll have all three of you hypnotized in no time, and you’ll feel so much pity for her, none of you will be able to catch her.”

At first their plan works, as the fishermen are able to hurl their net over the mermaid and then hoist her up on a cart. The illustrator’s eye-catching drawing shows her tangled-up tail hanging over the edge of the cart that one man pulls down the street toward an old barn. Some readers will sense trouble, however, as two of the men leave to procure a suitable carriage in which to take the dazzling beauty to the castle.

Those readers would be right to wonder how strong the lone man will be. As he watches her writhing in misery, he unthinkingly pulls out the earwax and, of course, submits to her wish to be released. “How quickly she could hop on that tail of hers, out through the barn door and back down to the river, with the little fisherman skipping behind her like a lovesick fool!”

The bittersweet story closes with the revelation of how the people of Warsaw came to build a statue of a mermaid in their city.

While many readers will be lured by the mermaid story, they should venture further into this collection. The kidnapper in “The Turnip-Counter,” for instance, can’t conquer a clever princess but does deliver plenty of laughs. The homely hunchback takes on the image of a dashing prince and proceeds to kidnap a princess who’s engaged to another. All too soon, his “castle” withers to ruins, his handsome brown locks turn to “greasy, yellowish unkempt hair,” and his black stallion becomes . . . a turnip. Even the 12 maids he offers his captive are not what they seem: “. . . [A]s she watched, the skin on their faces had begun to wrinkle and one by one, their bodies started to shrink and get rounder!” More turnips!

The princess, however, has her own tricks, and when he turns his back, she transforms one turnip into a white mare and gallops off to meet her true love, leaving the old hunchback to count his turnips in the field.

Another appealing happy-ever-after love story, “Jegle and the King of the Lakes,” will please fans of stories that echo “Beauty and the Beast.”

For those who prefer a salty tale, “Skarbnik’s Second Breakfast,” provides satisfying fare. It takes us back to a simpler time, when salt was precious. The miner Szymon finds not only a good vein, but also the pipe-smoking underground spirit Skarbnik, known to reward the good and punish the bad.When the miner beats Skarbnik at card games, the spirit rewards him by revealing where to find the best salt. Eventually, though, he tires of losing and hones his skills so he can beat Szymon.

Each time the spirit wins, the miner must give him fresh bread and butter. Before long, the miner’s wife notices how quickly her butter is disappearing and gets the truth out of her husband. Next time, the miner gives Skarbnik bread spread with potato paste instead of butter. The outraged old ghost makes the man pay for deceiving him. Poor Szymon, who didn’t even know of his wife’s trick, must abandon the mine, never to find salt again.

Unfortunately, the author sometimes veers into language that seems either too modern or too literary for his material. “The Goats of Poznan,” for instance, is a simple tale of a poor boy blamed for burning a boar as it roasts on the spit. As Mr. Monte points out in his notes on the stories’ sources, this comes from the oral tradition.

Yet instead of the rhythmic chants or spare, lilting language one would expect, it is weighed down by unnecessary description and sophisticated word choices that will not resonate with a young audience. The tale does, however, explain why two white goats emerge from the town hall’s clock and butt their heads at twelve each day—a sight most of us would delight in watching.

Enlivened by expressive drawings that evoke Old World places and people, The Mermaid of Warsaw is a collection worth dipping into.