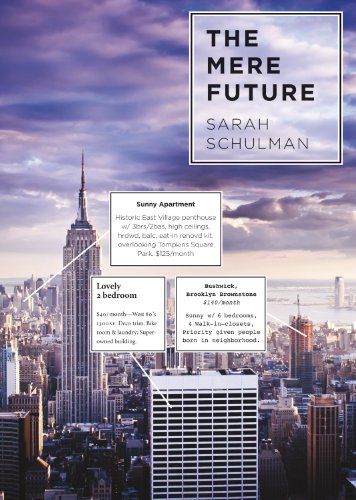 “The Mere Future reads like a modernized Candide by Voltaire crossed with Brave New World by Aldous Huxley. It slyly pokes fun at urban mores and the human capacity to let things slide when it’s easier to do so.”

The Mere Future by Sara Schulman is a dystopian satire set in New York that shows at least one way that we could accomplish a world where everyone has a home. But the cost is subtle and insidious. Ultimately, this novel asks, is it worth it?

The novel is told from the almost omniscient viewpoint of a nameless main character. She tells the story mostly from her point of view, occasionally stepping into the heads of other characters as if they were telling the story from their point of view.

The key players are the storyteller, her girlfriend Nadine, a famous author named Harrison Bond, Harrison’s girlfriends Claire and Ginette, and Jeff, Claire’s real love interest and his two sons. All of the characters’ lives intersect in interesting and sometimes odd ways.

Set in the near future, The Mere Future takes us through the first few months after New York elects a new Mayor with some radical promises to make life better for everyone. On the surface, all is indeed rosy.

Rent is cheap; you can get a three bedroom, two bathroom penthouse apartment in the Historic East Village for only $125 a month. Everyone has a job . . . and most of them work at The Media Hub, where all the marketing and advertising for the city is created. Gone are the chain stores and restaurants that have homogenized the city.

But how is all this change being paid for?

This is what Nadine and the storyteller slowly discover through the story. Has the nature of New York truly changed into a more utopian way of life? Or has the dark side of human nature been whitewashed and more cleverly camouflaged?

The Mere Future reads like a modernized Candide by Voltaire crossed with Brave New World by Aldous Huxley. It slyly pokes fun at urban mores and the human capacity to let things slide when it’s easier to do so.

The storyteller is of average intelligence and very much focused on making her relationship with Nadine work. This relationship is the reason she does everything she does, from trying to get a promotion to giving up the idea of the promotion. It is the reason that she doesn’t put the puzzle pieces of her new society together, even when she is obviously being obfuscated. And in the end her single-mindedness is the reason the relationship will eventually fail.

The Mere Future at first feels like a string of random events, but as the novel progresses, you start to see how each event and character ties together. However, although the book jacket mentions that a high-profile murder is key to the story it doesn’t happen until Chapter 31 of 41 total. In many ways, the murder is just another anecdote that shines a final light on how flawed the new system is.

The sad thing is, the new system works so well for most, that it will probably be just as long lived as the system we currently have—a system that is equally flawed.

The Mere Future is an intelligently written satire that doesn’t reveal its full effect until the end. So it is easy to wonder why you’re reading it—other than for the excellently crafted prose, reminiscent of Oscar Wilde. It is subtle and grows on you over time. And finally, it has something important to say, something we should all be thinking about: When does marketing cross the line and become an invasion of our human rights?