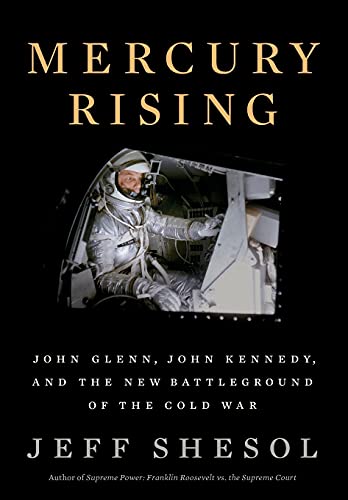 “Jeff Shesol shows how to detail one intriguing tale after another while backing every word with hundreds of bits and bytes found in library archives, government documents, memoirs, and interviews.”

This is the perfect book for anyone who wants to read about real life adventures and learn what makes heroes tick. Mercury Rising will tell you how John Glenn traveled from New Concord, Ohio, to dogfights over North Korea and on to orbiting the globe. It will help you understand how some families stay together in the face of existential challenges, how American politics and industrial technology converge, and how the United States won the Cold War competition with the USSR.

When the Soviets tested an intercontinental ballistic missile and an artificial earth satellite in 1957, Communist Party leader Nikita Khrushchev boasted that the USSR could send ICBMs anywhere. President Dwight D. Eisenhower understood the symbolic significance of the first Soviet missions in space but tried in the late 1950s, largely in vain, to calm anxieties about the United States lagging behind the USSR. He worried about the cost of space racing and doubted its military potential.

John F. Kennedy, inaugurated president in 1961, took a more competitive stance. The global pressures on him were much greater than Eisenhower had faced. JFK had accused the Republican administration of permitting the USSR to create a missile gap. But when Cuba crushed anti-Castro forces backed by the CIA in April 1961, Kennedy refused to provide them air support.

That same month, Soviet cosmonaut Yuri Gagarin in Vostok 1 made the first crewed spaceflight. Following on other Soviet “firsts,” Gagarin’s feat on April 12 was widely perceived as a serious threat to perceptions of the global balance of power. In May 1961 US astronaut Alan Shepard made the first US crewed spaceflight, but his Mercury-Redstone system did not put him into Earth orbit. President Kennedy met with Soviet leader Khrushchev in June 1961. Full of pain pills, JFK appeared weak next to the older and more forceful Communist Party boss.

Since 1958 Khrushchev had been threatening to isolate West Berlin. In August 1961 he scored a sort of victory when he walled off East Berlin, and JFK replied with a measured response, again seen as weak. In August another Soviet cosmonaut, Gherman Titov, flew around the Earth 17 times in Vostok 2. That same month saw Khrushchev break a three-year moratorium on nuclear testing with some of the largest H-bomb explosions ever conducted.

In reply, JFK ordered several underground nuclear tests, while continuing to press for a test ban treaty. The reality was that the United States led the USSR in long-range missiles as well as bombers and in the number of nuclear experiments already conducted, but much of the public believed that the USSR had outpaced the United States and would continue to do so. Shesol explains how this global picture framed the US space program, pressing Americans (as well as Soviets) to take risks with machines and astronauts before all the uncertainties had been identified and mastered.

NASA planned to launch John Glenn into space in late 1961-early 1962, but cancelled one launch after another due to technical difficulties. Finally, on February 20, 1962, Glenn became the first American to orbit Earth. He named his Mercury-Atlas 6 vehicle Friendship 7.  He orbited Earth three times and returned safely, though serious concerns arose when the vehicle’s heat shield appeared loose. How Glenn, his land-based team, and Glenn’s family got through the flight—just under five hours—is the most absorbing chapter in Mercury Rising.

Kennedy did not want to risk Glenn’s life on another space flights. Flying in Mercury-Atlas 7, Scott Carpenter in May 1962 achieved the first manual retrofire. He took photographs and tested liquids in weightless conditions. Between that flight and the October 1962 Cuban missile crisis, there were two other Soviet and one US human crewed spaceflights. After Khrushchev retreated from Cuba, much of the public believed the United States had regained the lead in military-political power.

President Kennedy and Soviet leader Khrushchev sometimes hinted at the possibility of joint activities in space, but their countries—indeed, their political-ideological systems—intensified their space race/arms race.

On July 20, 1969, astronauts Neil Armstrong and Edwin “Buzz” Aldrin became the first humans to land on the moon. Armstrong declared, “That’s one small step for men, one giant step for mankind.” The Apollo 11 mission took place just eight years after JFK announced a national goal of landing a man on the moon. Apollo 17, the final moon mission, took place in 1972.

Glenn resigned from NASA in 1964. He served as a Democratic Senator from Ohio from 1974 to 1999. Still a senator, he flew on Space Shuttle Discovery’s STS-95 mission, making him at age 77, the oldest person to fly in space. Having risked his life repeatedly in aerial combat and in space, Glenn passed away in the Ohio State University hospital at age 95 in 2016.

Author Jeff Shesol shows how to detail one intriguing tale after another while backing every word with hundreds of bits and bytes found in library archives, government documents, memoirs, and interviews. Shesol captures the spirit as well as the facts of what happened.