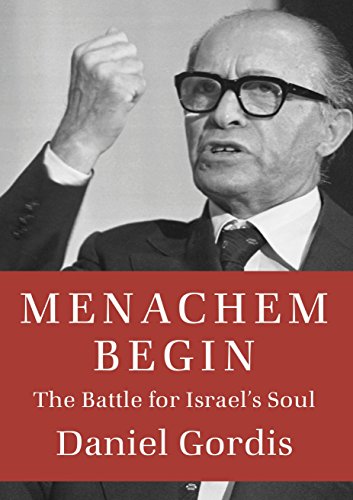 “Gordis has written a concise and exciting political biography of Menachem Begin. . . . Begin was a man who sought to save Israel's metaphorical soul with daring acts, both on and off the battlefield. It earned him ire and derision at home and abroad, but it also preserved Israel during times of crisis.”

Menachem Begin was the Prime Minister of Israel from 1977 to 1983. During his tenure, he oversaw several controversial events in Israeli history.

With the help of his Defense Minister Ariel Sharon, he intervened in the Lebanese Civil War and in 1981 gave the go ahead for the bombing of the Iraqi nuclear reactor in Osirak. Political rival David Ben-Gurion called him a fascist, but he was the first Jew to win the Nobel Peace Prize.

In this short compelling biography, distinguished academic Daniel Gordis distills the essence of Begin's long, storied, and contentious career. The biography Menachem Begin: The Battle for Israel's Soul traces the life of Begin in all its charismatic and confounding glory.

Like Ariel Sharon, Menachem Begin was born in Poland and became enamored by the Revisionist Zionism of Ze'ev Jabotinsky. Unlike Sharon, when he immigrated to Israel in 1942, he did not Hebraicize his name. Throughout his life, he self-identified as a Jew, not as an Israeli. Mr. Gordis sees this as a way to view his later political decisions.

Following the defeat of Nazi Germany, Begin continued to battle the British colonial forces. Once the British left, Begin was also instrumental in nearly causing the young state to lapse into civil war. This was because he belonged to Irgun, a radical Zionist group that refused to fully integrate with the nascent Israeli Defense Forces.

But Begin's radicalism had been tempered by his experiences in Europe. These experiences included fighting for the Polish Army, surviving a Soviet prison camp, and having his parents die in the Holocaust. This made Begin sensitive to those who would seek to destroy the state of Israel. Unlike Ben-Gurion, Begin was not a Socialist.

After the state of Israel was born in 1948, Begin entered politics by forging alliances against the Labour majority. He formed the Herut Party early on and allied itself with the Liberal Party in 1965 to form a unity government under Prime Minister Levi Eshkol. It wouldn't be until the aftermath of the Six Day War that Begin could break the hold of the Labour Party. Following decades of tenacious alliance building and relentless criticism, he attained the Prime Minister post in 1977.

When Begin became Prime Minister, he became the first politician to hold the office since 1948 not to be from Labour. Begin and his new Likud party could be seen as part of a larger global trend. He joined Ronald Reagan and Margaret Thatcher as conservative counterweights to the Left's overconfidence and ideological drift. His election was seen as a resounding renunciation of the hubris that caused the Six Day War. Like Reagan's alliance between the Republican Party and the Christian Coalition, Begin allied the Likud Party with the religious Shas Party and the settler movement.

Current events have illustrated how these politico-religious alliances could be characterized as Faustian, discriminatory, and self-defeating. Begin's insistence on Eretz Israel—the contiguous territory including all of Gaza and the West Bank—had its roots in the European Jewish experience. Unfortunately, demographics and global popular opinion eventually turned against Israel's post-independence conquests. The analogue of seeing every Israeli killed as an irreplaceable tragedy was with those seeing the same tragedy in giving up even an inch of Israeli soil. Because Begin thought in Biblical terms and possessed a stirring charisma, this made it harder to face up to the changing realities in the Middle East.

Gordis has written a concise and exciting political biography of Menachem Begin. Despite his subject’s long and contentious life, Gordis keeps it short. He also includes appendices that chart the growing popularity of Begin-led political parties and a chronology of Begin's life.

Begin was a man who sought to save Israel's metaphorical soul with daring acts, both on and off the battlefield. It earned him ire and derision at home and abroad, but it also preserved Israel during times of crisis.