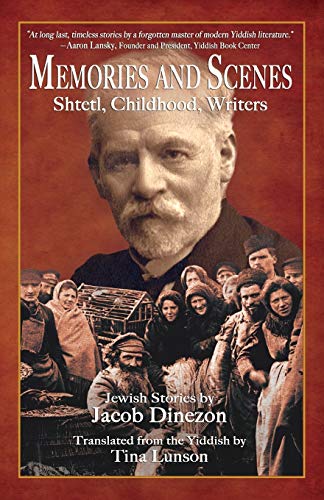 “Dinezon’s writing is touching and evocative; his characters are vivid and memorable. . . . Friend and advisor to almost every major Jewish writer of his day, Dinezon is truly a giant in Yiddish literature.

The three classic writers of modern Yiddish literature, Sholem Abramovitsh (Mendele Moykher Sforim), Sholem Aleichem, and Isaac Leybush Peretz are commanding and well known as novelists with a focus on the Shtetl, the small Jewish communities scattered across Russia and Eastern Europe. Almost anyone well versed in Jewish and especially Yiddish literature can name and successfully discuss their works.

Far less is known about Jacob Dinezon and his work to promote other Shtetl authors. He advised the great Sholem Aleichem on how to create and produce the first Jewish literary journal, called The Jewish Folk Library. He used his own money to publish the first book by one of his colleagues—the great I.L. Peretz. The two then joined forces to create and publish a series of Jewish holiday publications. This became critical to the literary lifeblood of Jewish communities as Russia and other Eastern European nations outlawed Jewish newspapers.

One of Dinezon’s most important books was Yosele, which exposed corporal punishment in Jewish elementary schools (cheders). The book was so persuasive that its influence created sweeping changes in those schools and made Dinezon a champion for Jewish children.

Each story in Memories and Scenes is unique and powerful. Dinezon’s characters represent the duality of life in the Shtetl—common people attempting to reconcile a life of poverty and discrimination against traditional Jewish values and religious obligations. In one story, a town learns about inequality and poverty from someone they thought was a town drunk, although he was not. In another, a good-hearted young man is pursued relentlessly by the town yenta (matchmaker). An old man, ridiculed for teaching that everything can be explained with algebra, learns from a student that the beauty of nature is the ultimate way to explain life. Finally, an entire town is thrown into chaos over the behavior of a goat.

Dinezon’s writing is touching and evocative; his characters are vivid and memorable. Like many Jewish authors of his time, Dinezon advocated for poor and exploited Jews who lived in Shtetl communities. In doing so, he displays the unique character of these physically disparate, but socially similar societies, while effectively adding to the quality of Yiddish literature. Friend and advisor to almost every major Jewish writer of his day, Dinezon is truly a giant in Yiddish literature.