Memoirs of a Breton Peasant 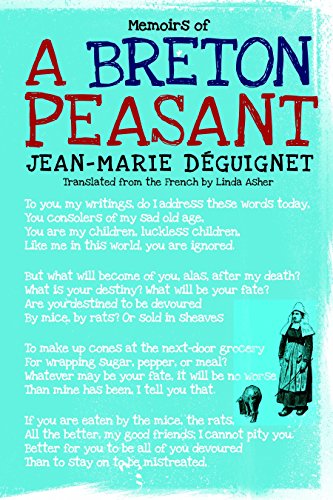 “Mr. Déguignet’s notebooks offer valuable material for researchers. But they also afford insights into a remarkable life. Memoirs of a Breton Peasant will leave discerning readers with a very uncomfortable thought: How many other people might have left records of their lives had they only had the opportunity and the education?”

It’s not often that the words of poor peasants appear in print. And when they do, it’s a cause for rejoicing, especially for scholars pertaining to the Braudel/Certeau school of the history of daily life.

Even though he’s been dead for over 100 years, 19th century Breton peasant Jean-Marie Déguignet would be rubbing his hands together in glee to know that his unusual life story will soon be read by even more people.

The tale of Mr. Déguignet’s memoirs in itself makes a most interesting story, as Bernez Rouz relates in the Preface to Memoirs of a Breton Peasant. The folklorist Anatole La Braz met Mr. Déguignet in 1897 and instantly wanted to publish his memoirs, twenty-four volumes in total. He paid him 100 francs. Years went by and La Braz did little except to publish 130 pages in the December 1904 issue of La revue de Paris. In the meantime, giving up on seeing his words immortalized in print, Mr. Déguignet began writing his memoirs all over again.

Over 250,000 copies of Mr. Déguignet’s Memoirs of a Breton Peasant sold in France in 1998. An excellent and highly readable English version, translated by award-winning editor and translator Linda Asher, appeared in hardcover in 2004 and is now due out in paperback and Kindle editions. This represents only a small portion of what Mr. Déguignet wrote; in his later years, his writings took a rather paranoid turn.

Mr. Déguignet’s life spanned a time period when France reached out and became a world power through her forays into the Crimea, Algeria, Mexico, and Italy. Born in 1834 to a landless Breton peasant family, Mr. Déguignet spent his early life as a professional beggar and cowherd. Later he farmed and ran a tobacco shop.

Obviously highly intelligent, he credited his eruditeness to an early whack on the head by bee-stung horse. He never attended school except to learn the Catholic catechism and prayers. Instructed in reading by a spinster seamstress from his village, he later taught himself French, Latin, Italian, and Spanish.

As Mr. Déguignet states at the beginning of Memoirs of a Breton Peasant, “I know that artisans and laborers are in no position to record their lives, as they have neither the education nor the time it would require. Although I belong to that class, having lived my whole life in the heart of it, now—in my present forced leisure—I shall try to write, if not with talent at least with sincerity and openness, how I lived and thought and reflected within this wretched setting, and how I joined and kept up the terrible struggle for existence.”

Take his encounter with a librarian at the Quimper Public Library as an example of the prejudice he constantly faced as a peasant: “When I told him I wanted to consult a certain work on astronomy by Flammarion, he burst into Jupiterian laugher, and with no further response than that side-splitting guffaw, he showed me toward a dim recess saying, ’Here, look, there are some good novels here, Pick one; that will do you nicely.’ There was indeed a pile of old discarded books.”

In 1854, shorter than the requisite five feet in height, he nonetheless joined the French army and spent the next fourteen years traveling, fighting, and soaking up new experiences. When he left Mexico on a hulking iron ship called the Souverain, he wrote about a stop in Havana, “There we stopped to take on provisions, and in those twenty-four hours I had the pleasure de hablar again, for the last time, the beautiful language of Cervantes and of Quixote de la Mancha, with the women who clustered around our ship to sell us those lovely succulent, nourishing fruits of the tropics.”

Rich with observations about the superstitions and beliefs of the uneducated people of Brittany, most who knew only a few words of French, Memoirs of a Breton Peasant presents the state of France as it actually was in village after village, where—as late as the end of the 19th century—people did not speak the language of their own “nation” nor did they identify with “La Belle France.”

As Mr. Déguignet recalled his time in the Crimea, he commented, “For here I was hearing a foreigner [a Russian]—a man who lived many hundreds of leagues away from France–speaking the language of Voltaire so well, whereas in France I had never yet encountered anyone who spoke it except for my young teacher, and I had met him by chance out here [Crimea].”

Mr. Déguignet laid much of the ignorance and backwardness of French peasants on the shoulders of the Roman Catholic Church. After a short stay in Jerusalem, he turned away from the Church, became an atheist, and thereafter never passed up an opportunity to lambast the priests and what he consider their greedy, money-grubbing ways.

He told of a custom practiced in Brittany, “The curé sends out two people prominent in the commune. I happened to be at home when the men came in announcing that they were collecting alms for Saint Allour, the patron saint of the parish. I told them right away that this Saint Allour had never existed, and, even if he had, he no longer needed any bread or money, and that this work they were doing was the most shameful, despicable work possible: to have the audacity to go asking for grain and money from poor people who themselves didn’t have enough bread to feed their children . . .”

Books like Mr. Déguignet’s open up a reality rarely seen, because most of history flows from the pens of the privileged and the educated. The plight of peasants often appears only in the tallying of staggering statistics after battle losses or plague deaths. For that reason, Mr. Déguignet’s notebooks offer valuable material for researchers. But they also afford insights into a remarkable life.

Memoirs of a Breton Peasant will leave discerning readers with a very uncomfortable thought: How many other people might have left records of their lives had they only had the opportunity and the education? Taken even further: How many people now alive could do the same, but for the lack of opportunity and education?

Let Mr. Déguignet have the last word: “I end by wishing mankind the power, or rather the will, to become true and good human beings capable of understanding one another and getting on together in a societal life that is noble and happy.”