Meet Me in Another Life: A Novel 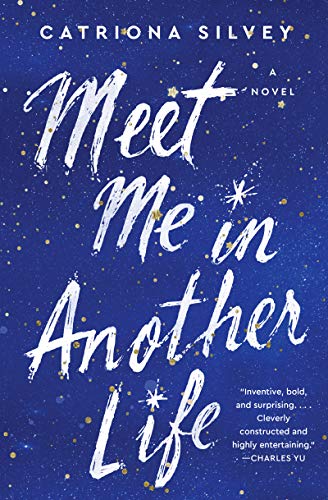 “‘I’m real, you’re real. And real people don’t die and come back, regenerated into a hundred versions of themselves.’”

Thora Lišková and Santiago López, or Santi for short, are strangers in a foreign land—a university campus in Cologne, Germany. She is a student, he a custodian—or at least they are when we first meet them. The pair will exchange ages, professions, and positions repeatedly as the reader alights on them at different places and in different times. Not all of these are earthbound, which makes it difficult to illuminate this novel without spoiling its finely wrought dénouement.

Thora, whose dad is Czech and mother is Icelandic, grew up in the UK and never felt she fit in anywhere. Happily, she discovers in Santi a kindred spirit despite their enormously different backgrounds. “Thora doesn’t believe in fate,” and yet she’s irritated by “an itch in her heart that goes away only when she’s somewhere she shouldn’t be.” Why can’t she be happy in “one place, one city, one planet?”

One evening the newfound friends climb the abandoned clock tower on campus. Later, as they prepare to part ways Thora climbs down first and heads off. Weeks later she learns that Santi is dead, having fallen from the tower.

In the next life iteration Santi is her science teacher, Thora an imaginative student who wants to become an astronaut. He envies her illusion of “infinite potential” and ruminates on his own disappointments and failures. Yet in Der Zentaur bar, the university hangout, Thora and Santi meet socially thanks to the barmaid Brigitta, who mistakenly brings Thora Santi’s drink order. Effortlessly, conversation flows. Again, they feel as if they know one another. Events conspire to make them lose track of each other, and yet they end up married. Then, he dies of cancer, and she longs to run away from Cologne. She lives on edge, imagining it is Santi coming home “every time she hears footsteps on the stairs.” With her daughter as company, she lives out her remaining years alone.

In the next life Thora is a foster child at the Kinderheim orphanage from which Santi and wife Héloïse adopt her. They hope to provide the girl stability, but she is a disruptive child, nothing like what they had first assumed. Fast forward to their next life, and they are twin brother and sister who differ in age by only half an hour and look nothing alike. Santi is protective of Thora, the siblings talk about death and continue to rendezvous at the clock tower where a new figure appears, Peregrine, a thin man in a blue overcoat who seems dazed and confused each time he appears.

Next, the two are PhD colleagues at the Physikalisches Institute, Drs. L & L, who share an interest in astronomy. Watching the stars from the roof of the clock tower, Santi confides that he remembers “constellations that don’t exist. Every time I look up, all I see is what isn’t there.” Dr. Lišková has the missing constellation tattooed on her wrist.

The couple’s sense of familiarity increases with each iteration, each always occurring on the college campus centered in the city of Cologne. They focus on the ruined clock tower, its hand stopped at twelve thirty-five. Increasingly, the world “doesn’t look right.”

The two are next policeman, partners on a dangerous beat and reputed to be difficult to get along with. “We both know we’re not ordinary people,” says Santi. “I believe we were meant to work together.” And then a criminal they are pursuing slashes his throat. “Remember,” Santi pleads, before going limp in Thora’s arms.

In the next life she does remember. She watched him die and went on to live alone, making it to 55 until breast cancer took her. None of their various lovers or relatives remember anything about Thora and Santi’s previous lives, “just you and me.” Perhaps they were in a horrific accident and are now lying in a hospital with their brains “going over and over different versions of our lives.”

And then finally they become aware of the bizarre strangeness of what has been happening to them. The stars shift and change. Peregrine reappears as if by magic. “Say his name aloud, and in he walks.” He is obviously connected to their multiple past lives, except that Peregrine has aphasia or dementia and can’t really explain what is going on. Here the story starts to resemble a detective procedural, and fantastic elements appear such as Thora being able to walk through walls or food taken from a market stall magically replenishing itself. One afternoon, it even rains fish. Is their world falling apart? Are they crazy? “I’m real,” Santi says. “You’re real. And real people don’t die and come back, regenerated into 100 versions of themselves.”

The enigmatic Peregrine turns out to be the one character throughout their adventures who knows them both. Everyone else in their various lifetimes is associated with only “one or the other of us.” Perhaps their mutual acquaintance knows what is happening. The name Peregrine means a wanderer, Thora tells him. “Pilgrim,” Santi corrects. Peregrine in fact turns out to be a program interface between the two travelers and the true environment in which they are hurtling through space. The clock tower is a countdown, and they are explorers reaching for the unknown.