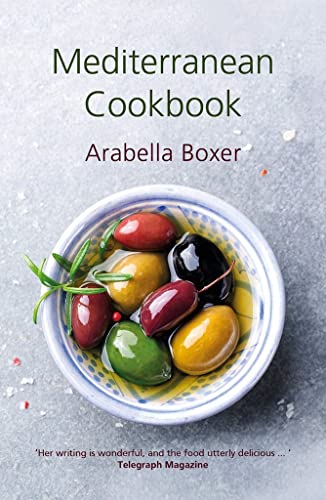 “Home cooks will find Arabella Boxer’s food writing to be evocative and the recipes simply irresistible. Mediterranean Cookbook proves that photos are not necessary in a really well-written and well-researched book.”

Colorful photographs don’t always make for a great cookbook. Many iconic cookbooks (The Joy of Cooking, Greens, Laurel’s Kitchen, and The Moosewood Cookbook, to name a few) have no splashy food pictures and yet have endured the test of time. Arabella Boxer’s Mediterranean Cookbook is sure to make it on a list of well-researched, dependable cookbooks.

This re-issued cookbook is nearly 40 years old, but the passage of time has not dimmed Boxer’s charming style or her delicious recipes. The cover has the most appealing photo of a dish of olives resting in golden olive oil and is the only photograph in this small volume. If you can’t cook without detailed photographs, this book is not for you.

The recipes are tested, totally authentic, and divided into easy-to-use sections from Soups to Mezes and Tapas to Sauces and Drinks. Here the reader will find recipes for fish, poultry, pasta, rice, vegetables, salads, breads, and dessert. The directions on how to prepare each dish is simple to follow and concise.

Boxer has an impressive resume, including a stint as Food Editor of Vogue magazine (1975–1991), and has won numerous awards for her food writing. She took on the ambitious task of writing about foods from the Mediterranean region which encompasses 15 countries, several islands, and three continents, but further research yielded something interesting.

“Yet when one starts to consider the matter it becomes clear that all these countries have a great deal in common, and the task seems simpler than at first imagined. It is as if the sea itself has imposed a strong unifying effect on the areas surrounding it. Different as the countries may be, in terms of race, politics, religion and culture, in the end we are forced acknowledge that food is based on quite other matters.”

When Boxer studied a map of the region, she found “Whatever new regulations the EEC may impose upon our country, our food production can only be altered within fairly narrow limits which were laid down in prehistoric times by our climate and the composition of our soil.”

With this in mind, Mediterranean food as a concept becomes more meaningful. The area known as “Mediterranean” can be clearly defined as the land lying between two roughly parallel borders: to the north, the northern limit of the olive tree; to the south, the northern limit of the palm grove. This area includes the southern half of Spain and Italy, and a narrow strip running along the shores of southern France, northern Italy, Yugoslavia, Albania, Greece, Turkey, Syria, Lebanon, and Israel. The southern part comprises a broad coastal strip running along the shores of Morocco, Algeria, and Tunisia. Boxer also includes Egypt in this book because of its rich and varied cuisine.

Once the reader understands the region, then the recipes in Boxer’s book makes complete sense. Recipes from Morrocco are right next to ones from Spain or Lebanon. Boxer indicates the country of origin in each recipe—a handy reference for home cooks who want to prepare dishes from a specific region. In the Soup section, a cook might find a garlic soup from France right next to a Harrira Soup from the Morrocco. (Harrira Soup is made during Ramadan).

Boxer’s writing is lyrical, poetic even, and will charm home cooks. Snippets of her travels in the Mediterranean region read like a travelogue, full of beautiful narratives and observations.

“As I write this, I am on a Greek boat halfway between Samos and Piraeus, travelling third-class in the middle of August. With a calm sea and cloudless sky, the uneventful trip is continually enlivened by the cries of vendors offering things to eat. First come little bunches of grapes, weighed on an antique iron scale; then tiny packets of shelled nuts, wrapped in minute cones of paper. Iced beer and toasted cheese sandwiches are constantly on sale, and each time the boat stops at one of the islands, boys run on board to sell the local specialty. At Mykonos, thin round cakes of creamy nougat are brought on; with crisp chopped nuts enclosed in a flaky sort of meringue. It is quite the best I have ever tasted.”

Besides, the expressive writing, there are many interesting and varied recipes. One unusual one is for an almost non-alcoholic cocktail called a Monaco. It consists of a teaspoon of grenadine (made from juice of pomegranates) and equal parts light lager and fizzy lemonade. The resulting cloudy pink drink is perfect before lunch or “useful for giving to adolescents since the alcohol content is small, yet it has an air of sophistication about it.” (Just like Boxer’s writing and recipes).

Home cooks will find the Boxer’s food writing to be evocative and her recipes simply irresistible. This cookbook proves that photos are not necessary in a really well-written and well-researched book. The only criticism home cooks might have is that the font is too small and is rather difficult to read.