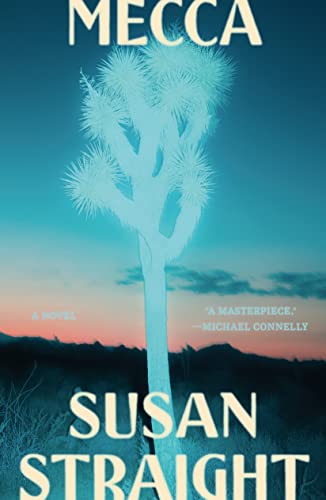 “Family and home: They’re the grounding of this novel and of humanity.”

The most wonderful aspect of this powerful novel is the world it lovingly evokes: the vast farming and desert area known as California’s Inland Empire, 100 miles east of San Diego and Los Angeles.

As one character describes the scenery outside her car window: “It had to be one of the most beautiful places in the world . . . the base of golden sand and white dunes, the silver and green ghost trees and smoke trees floating like strange baby’s breath, the spears of white yucca, and the green creosote bushes.”

The people in Mecca are a mix of ethnicities and backgrounds—Black, Latino, Cajun, indigenous Mexican, US Native American, white. Their families came to this unknown place with 18th century Spanish conquistadors and as Mormon slaves in the 19th century; some of their ancestors have lived on this land since the beginning of human existence, and some of the characters slipped across the border of Mexico just months before the book begins, in the summer of 2019.

They are working class folk, including nurses, a butcher, a housekeeper at a spa, a California Highway Patrol cop, an animal control officer, and a mom who weaves flower arrangements at a small florist shop.

In short, this is not the sexy California of most movies or books.

While there is plenty of action in Mecca, the basic narrative line is so thin that it’s almost invisible.

It starts two decades earlier, when Johnny Frias, a Latino motorcycle cop, kills a rapist whom he catches beating up his victim. That death, which has haunted Johnny ever since, will ultimately connect him with Ximena Lopez, an undocumented young immigrant working as a housemaid.

Most of the book, however, consists of stories about the multiethnic circle of friends whom Johnny has known his entire life. Each story could be pulled out to stand on its own. (The main weakness of this book, in fact, is the overflow of characters, since Johnny’s friends all have their own rich circles of family and friends.)

The novel’s real connecting threads are thematic ones about friendship, family, violence, and the daily hits of racism, as inevitable as breathing. A young Black basketball star is shot by police. Ximena’s uncle prepares her for raids by US Immigration and Customs Enforcement officials. When Johnny stops speeding drivers, they toss off comments like, “Maybe I need to see your ID, make sure you’re not a bad hombre yourself.”

Covid-19 is another pressure pushing these characters’ daily lives toward the edge. Author Susan Straight, a bestselling veteran novelist and National Book Award finalist, shows the pandemic’s dulling impact on an eighth-grade boy who doesn’t have a reliable Internet connection and whose parents can’t work remotely.

“The days spun by, pointless and hot . . . No school in the fall. Freshman year online with a grip of strangers. He and his father watched Dodger reruns.”

Stronger than any of the characters’ struggles, though, are the bonds of family. Matelasse, the florist-shop mom, drives more than 150 miles on a 120-degree August morning with an overheated radiator, abandoning her first chance at a tryst with her lover, to help the uncle who raised her, because his granddaughter may have Covid. “There was no arguing,” Matelasse thinks. “This was family.”

Family and home: They’re the grounding of this novel and of humanity.