Meaty: Essays by Samantha Irby, Creator of the Blog Bitchesgottaeat 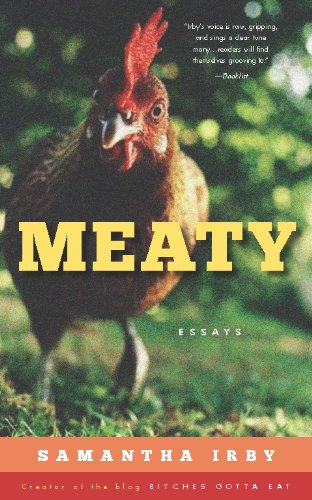 “[Ms. Irby is] a fresh voice and talent to be watched.”

Like the modern-day Howard Beale, Samatha Irby is mad as hell, and she’s not gonna take it anymore. The result is Meaty, a collection of Ms. Irby’s autobiographical sketches, essays, and rants.

At first glance, Irby is the opposite of her more-famous fellow-Chicago memoirist-humorist-essayist, David Sedaris. While Sedaris is bemused and ironic, Irby is blunt and pissed off. But Sedaris and Irby share a common focus on the stupidities of our material culture and their vignettes have a similar underachiever vibe.

The following is a good of Ms. Irby’s mix of anger, humor, and smarts:

Dear White People, I love you because you mean well. I should clarify and say that I am referring to white people who buy North Face jackets and take their babies to yoga class, NOT these fucking Newport-smoking teen moms named “Destiny,” spelled with nine E’s. Those kinds of white people are terrifying. I like farmer’s market white people, the ones who are always dressed like they just finished climbing K2 when all they’ve done all day is eat samples at Whole Foods. The ones who try to convince me that a fifteen dollar jar of organically-grown, locally-sourced, environmentally sustainable white peach marmalade is a worthwhile fucking purchase. I’m black, ho. FUCK THE EARTH.

Dozens of similar examples of Ms. Irby’s acetylene-torch voice could be pulled from the pages of Meaty.

Ms. Irby is not interested in big issues or great causes. To the degree she touches on topics like feminism, environmentalism, and politics, it is to suggest that she doesn’t buy any of it. Environmentalists are silly; feminists are crazy for not taking the money of men willing to buy them a meal; Barack Obama is a “Halfrican” whose election is meaningless.

Meaty reads like a best-of collection from Ms. Irby’s blog BitchesGottaEat, but all the material here is new in these breathless, unconventional, bare-all essays.

If Meaty has a weakness, it is that the essays have a sameness to them, particularly when Ms. Irby discusses her sexual encounters and preferences. Halfway through Meaty, the reader already knows what Ms. Irby is likely to say about any issue. At this point, Ms. Irby continues to amuse, but she no longer continues to surprise. Thus Ms. Irby’s compiled work is less interesting than that of the best humorist-essayists of our time: Sedaris, George Saunders, Sloan Crosley, etc.

Along with young writers like Alissa Nutting and Laurie Weeks, Samantha Irby’s work proves that women can be just as witty, raunchy, and irreverent as men. Meaty is a best-of collection that contains some less-than-best-of material, but it still establishes Ms. Irby as a fresh voice and talent to be watched.