Meat Planet: Artificial Flesh and the Future of Food (California Studies in Food and Culture) 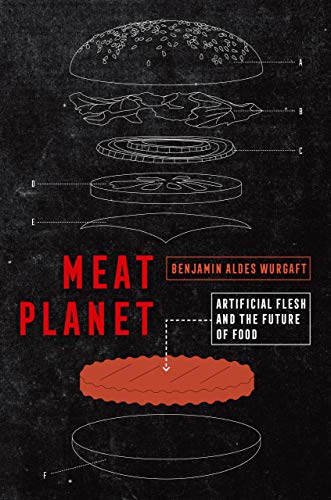 Meatless burgers are everywhere. So popular that supermarkets and fast food chains can’t keep them in stock. Whatever happened to cultured meat? It was going to allow us to eat animals without killing them. It’s hard to remember the hoopla that surrounded the first “artificial meat”? Back in August 2013, “in vitro meat” was introduced to the world in the form, of course, a burger. With an estimated cost of $300,000, this patty was the meat of the future. It garnered a lot of press and picked up unflattering monikers like “frankenburger” and “vat meat.”

Benjamin Aldes Wurgraft watched the presentation via the Internet with interest and skepticism. The pale meat, colored with beet juice, looked and cooked like a burger. However, the two independent tasters were not impressed. It had the mouthfeel of ground meat, but not the taste, as there was no fat to carry any flavor. This event marked the beginning of Wurgraft’s exploration of the world of the “test-tube burger.” He spent the next five years researching the subject, and Meat Planet is the result.

He talks to everyone from scientists to venture capitalists, most of the money for this research comes from technology companies. He considers the science, the history, and the symbolism of meat in our culture. What we eat is loaded with emotional undercurrents. Are we naturally carnivores? Do we need to grow more meat, or should we make better use of what we already produce? He references Greek myths and the Bible, cites philosophers such as Plato, Voltaire, Bentham, Engels, and Nietzsche. Nor does he neglect more modern commentators like Alan Toffler, Frances Moore Lappé, and Pete Singer.

Cultured meat still needs cows, or at least their cells. It is not plants masquerading as meat. The technology is borrowed from stem cell research, and a burger is the simplest form to grow. A steak, or any complex muscle, is much more difficult and even more expensive. Still this technology will need to be scaled up for it to become economically viable.

Wurgraft questions what we eat and why. He investigates meat’s production and economics. The industrialization of farming by way of CAFOs has reduced costs resulting in very cheap meat. Yet it has come with other consequences often hidden from the consumer. He points out that by scaling up farming, animal husbandry has been neglected and the expenses associated with producing food have been shifted from the consumer to the environment and the workers in the industry. Would scaling up cultured meat have similar negative effects, too?

Wurgraft doesn’t confine himself to meat, he looks into the future of our food, how it is produced by whom and for whom. Will it be possible to feed an increasing population with the constraints of climate change and finite resources? Government intervention, rewilding, restoring grasslands, growing insects, and becoming vegan are all discussed as possible solutions. What will save us and our planet? Will it be cultured meat? Not even close to an economic reality some six years after its birth, it still seems like a novelty.

This is a fascinating, thought provoking book. You will learn a lot from reading it. It will make you think, and question what you eat, and why.  While this is an academic work, carefully footnoted, Wurgraft writes engagingly and clearly, although you might want to keep a dictionary close by.