Meant to Be: If the Shoe Fits 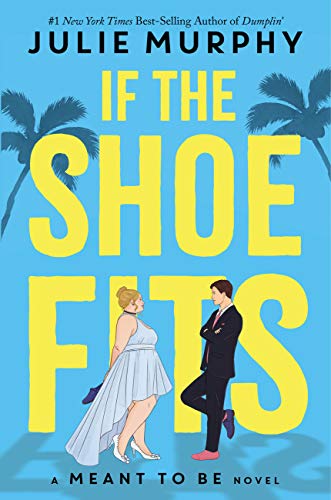 Julie Murphy is an accomplished and beloved YA author, and her first dip into the pool of adult romance with If the Shoe Fits feels like she’s been doing it for years. Given the age of the characters and the low steam level, this book will likely be enjoyed by her young adult audience as well.

Murphy has a talent for crafting characters, and it deserves applause; she makes the reader care about people from their very first description, and then somehow finds new depths to explore and probe throughout the book.

Take Cindy. After a poignant childhood prologue, she’s introduced in a scene stuffing a suitcase full of shoes crafted by her own hand, and every other detail we’re handed from that point forward serves to make her even more likeable.

She’s packing up her New York apartment and saying goodbye to her best friend after barely scraping by to graduate fashion school. Cindy has struggled since the death of her father, both with facing her emotions and also with finding her creative spark. Shoes are her one true love, but recently she’s come up blank when trying to find the joy and passion for them that once drove her designs.

Her stepmother offers her a job watching her half-siblings during the summer, and though the house in L.A. doesn’t feel like home, she doesn’t have any job offers or anywhere else to land so she starts there as she plans her next steps.

The story is a Cinderella retelling, but the twists on the classic tale serve to make it even stronger. Instead of being browbeaten by a vicious stepmother, that figure is transformed into a complicated woman who works too hard, but clearly cares about her stepdaughter and wants to strengthen their relationship. Instead of Cindy’s stepsisters harassing her, they are warm, if slightly superficial girls who support her through every endeavor.

Prince Charming is certainly affable, but he’s also a thoroughly modern man. Henry is posed to take over a fashion empire from his mother, and he has a lot of ideas on how to update the company and strengthen their brand. But of course he keeps his pure heart from the original story. He and Cindy meet on a plane early on in the story and have immediately obvious chemistry.

To keep things even more 21st century, there’s a reality dating competition. Cindy’s stepmother is in charge of the show, and with a little encouragement from a producer and nothing else to do, she decides to fill a last-minute opening to be a contestant. Her goal is not to find love, but to get exposure in the fashion world.

But when the suitor is introduced and turns out to be none other than the stranger she met on the plane, the stakes are raised. Cindy and Henry are wonderfully sweet together as their bond grows and they steal moments together, but the stress from the other women in the competition is palpable.

There are some classic characters in the cast of contestants, but Murphy once again does a great job fleshing them out and humanizing everyone, including the mean girl. The underlying commentary on reality television is smart without being malicious.

Being a plus-size woman on a national television show brings Cindy attention that she doesn’t necessarily want. But she rapidly turns into a fan favorite as her chemistry with Henry and confidence shine through, and many are excited to see a role model that looks like them on their TVs. Murphy discusses what Cindy faces as a larger woman, both in her everyday life and on the show, with blunt and refreshing honesty.

The book gets extra oomph from its exploration of Cindy’s grief over her late parents, and her solidifying self-identity. It’s hard not to cheer her on as she fights for herself, both in the dating competition and in her struggle to come to terms with her father’s death. Murphy’s warm and funny Cindy would make Cinderella proud.