A Meaning for Wife 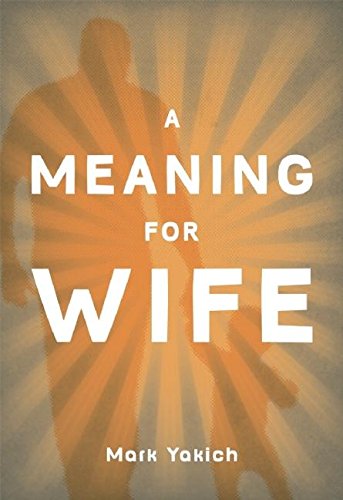 “Toward the end of the novel there is a gutsy shift in narrative tone that lends the ending a sense of closure. In recent years, women writers such as Joan Didion and Meghan O’Rourke have published nonfiction memoir accounts of grief. In his debut novel Mr. Yakich provides the male perspective. Recommended to anyone who has experienced loss.”

Mark Yakich’s autobiographical debut novel, A Meaning for Wife, is an introspective, amusing, and ultimately moving study of mourning and the grieving process. All but three and a half of the book’s pages are told in the second person, a narrative style that poets, including Mr. Yakich, have successfully employed in verse but is less common in prose fiction. Some readers may resist listening to a narrator talk to himself for 182 pages, but those who stick with it may well warm to the style. This example provides a plot synopsis:

“Your wife is killed by a cashew (anaphylactic shock), but there isn't time to grieve because your toddler son is always at your heels—wanting to be fed, to be played with, or to sleep next to you all night long. A change of pace seems necessary, so you decide to visit your parents in order to attend your twenty-year high school reunion. What begins as a weekend getaway quickly becomes a theater for dealing with the past—a past that you will have to re-imagine in order to have any hope of a future for you and your son.”

Our narrator protagonist—whose given name is only revealed more than halfway through the novel and whose surname is never mentioned but like the author’s rhymes with “jock-itch” (his high school nickname)—grew up in a suburb of Chicago and lives in New Orleans where he teaches high-school English online to disabled, home-schooled, and imprisoned students.

He has been a widower for about a year when he decides to spend a weekend visiting his parents so he can attend his high school reunion. His son Owen (the same name as the author’s son) is not quite two and is a constant presence for nearly half the book—that is, except for the slightly more than half the narrative when his father leaves him with his grandparents the night of the reunion. The grandparents are retirees, a former secretary, and a former engineer who is afflicted with schizophrenia. A married younger sister lives near the parents. Both the sister and our protagonist are adopted, which makes Owen his only blood relative.

Having a young and completely dependent child changes the stages of grief: “When one has a young child, one moves through Kübler-Ross a little differently than others: Denial is fairly easy and lasts five minutes; Anger seems to be a continual stage that comes in unpredictable waves; Bargaining doesn’t make any sense (how do you bargain with a dead woman?); and Depression, though tempting, has to be skipped altogether, because if one doesn’t get out of bed, it’s not as if one’s toddler is going to feed himself breakfast, pack a well-balanced snack, and then navigate morning traffic to half-day daycare. As for Acceptance, the alleged final stage, one is still not sure what that might be; acceptance of what—the cliché that death is a natural part of life? It was only too natural that one’s wife died because of a camouflaged tree nut.”

That excerpt appears fairly early in the novel, which describes how revisiting the past in the form of his childhood home, family of origin, and reconnecting with classmates he hasn’t seen in twenty years, helps our narrator cope with his loss and move on. Excluding flashbacks the action of the book transpires over a single weekend, and 100 of the narrative’s 186 pages occur at the reunion over a single evening, night and early morning.

In an interview, Mr. Yakich said he is glad he attended his high school reunion and advises others to attend theirs. Although the fictional reunion takes place in 2008 none of the participants appear to have already reconnected on Facebook, which isn’t mentioned. When he first arrives at the reunion “Jock-itch” feels a bit awkward and out of place, but as more people arrive he falls in with his old clique. He observes,

“The common past of your friends does and doesn’t seem to have changed—people look older of course, but their interactions with each other fall into familiar patterns. And so Rick’s wife looks uncomfortable not because her skirt suit doesn’t fit right, but because she doesn’t fit into the group. And although you don’t have much in common with Rick anymore, you still know how to navigate his personality. Later you will realize this is all bullshit, but for the moment it consoles.”

There is a fair amount of humor, and thankfully, in view of the theme, little of it is of the gallows variety. Some of the book’s humor takes the form of malapropisms, such as the narrator’s mother saying “water under the bride” instead of under the bridge, and “Variety is the price of life” instead of the spice of life. This is apparently an inherited trait; during a conversation with a female classmate at the reunion the narrator mistakenly replaces the word mood with boobs, to which his classmate replies, “No, I’m the one in the boobs.”

Also, at the reunion jokes are related at the expense of former classmates, including Lane, a dull witted former girlfriend. Carmen, our protagonist’s high school female best friend, who has a fondness for profanity and was also the class valedictorian, remarks, “I know she was my friend, but Lane’s as stupid as ever. I can’t believe she replicated herself four times. How the fuck did you date her, and why the fuck did I let you?” To which our hero replies, “I may have fucking dated her, but I never fucked her on a date.”

On the subject of whom he would and would not bed, our narrator berates himself,

“Why does it always boil down to looks, to how your penis might react? At one time you might have made love to Julia, but as you watch her behind vanish down the hallway, you know you wouldn’t do it now. You’re pathetic. As a teenager you thought it was only you who sized up every girl or woman with the thought I’d do her/I’d not do her. Then in college you realized that every young man has the same thought. Now that you’re nearly forty, it is tedious and yet unavoidable that you still make the judgment the minute you see a woman—you’re just not as conscious of it as you used to be. You’ll be an old man at the fiftieth high school reunion (should there be such a sad venture), and you will be sizing up the sixty-eight-year-olds, wondering if there is a firm tit among them.”

Apparently Mr. Yakich and his fictional alter ego are unaware that consciously or unconsciously adults of both genders make snap first impressions about whom they find or don’t find attractive. If our protagonist seems preoccupied with sex it is probably because he hasn’t had any since his wife’s passing. However he is wiser than he was when he graduated from high school, “There is no doubt that at eighteen you were a smartass who wasn’t very smart and a pain in the ass who didn’t know much about pain.” Nearly all his classmates at the reunion know about his loss, but he assumes a brave face and tells Carmen,

“The biggest difference in my life now is the cat. She follows me around the house like a dog. She used to sleep between my wife’s legs, now she only wants to sleep right next to my head on the pillow. All night she’ll wake me up, nestling and purring. It’s fucking annoying. But I don’t have the heart to kick her out of the bedroom.”

A men’s room conversation about marriage makes our narrator recall his own. He wonders if the sums of the times he and his wife were inconsiderate towards each other were equal numbers. When classmates miss his literary allusions he recalls that his wife often did too. He also wonders whether he will ever stop missing her.

Toward the end of the novel there is a gutsy shift in narrative tone that lends the ending a sense of closure. In recent years, women writers such as Joan Didion and Meghan O’Rourke have published nonfiction memoir accounts of grief. In his debut novel, Mr. Yakich provides the male perspective. Recommended to anyone who has experienced loss.