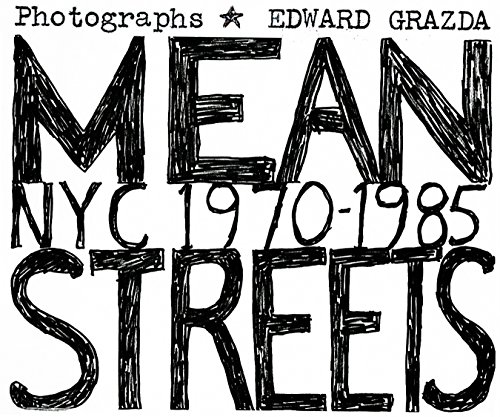 Taking its name from the iconic 1973 Martin Scorsese film, Mean Streets: NYC 1970–1985, this book by Edward Grazda captures the city in all its manic energy. In 1970 Mr. Grazda moved to New York City, “wanting to be a photographer, but with no idea how.” He would use his A.I.R. (Artist in Residence) loft as a “World Headquarters” for the next 40 years. He would travel the world but “always returned to the streets of New York.”

The first thing apparent in Mean Streets is the spontaneity of Grazda’s photos. Carrying a Leica he snapped images with a kind of roughshod randomness. In the current age of Instagram, Facebook, and Snapchat, it is easy to take candid photography for granted. Yet another tool in the smartphone toolbox. Grazda images evoke an off-the-cuff immediacy, images captured in the moment. His images freeze the onward drive of history as New York City descended into socioeconomic chaos and was reborn in Reagan’s era of junk bonds and cocaine.

Street preachers, prostitutes, bums, and porn store owners populate Grazda’s images. There is the “Pro-Vietnam War Rally, Wall Street 1970.” In the background a statue of George Washington looks down over the uniformed cops on horseback. The four cops mirror the white pillars of the U.S. Treasury building. Behind people are obscured, bare knees and the tops of heads only visible. Two men in business suits walk past the camera, one giving it a bewildered, “What the?” expression. On the facing page a TV is on fire in the Bowery. The stark surrealist image foreshadows the destructive energy of NYC’s punk rock scene. A statue of Christ on the roof of the Holy Name Center across the street from Grazda’s loft appears like a refrain. (It also appeared in Scorsese’s Mean Streets.)

In an afterword of sorts, Gary Leon Hill riffs on Grazda’s photos. “His photographs rake a moonscape littered with bodies, some still standing, some in poodle wigs and stiletto flip-flops, blurry visions knocked out loaded, whiskey spill of wino blood, the gravelly crunch of crack vials underfoot.”

The essay is nostalgic, relating how Grazda “ghosted through these streets like they knew him.” Mr. Hill reminisces how “Ed [was] scavenging, sluicing for gold.” He was an artist who “pioneered this wasteland.” This is either nostalgie de la boue at its best or permissive claptrap, depending on the perspective. Either way, Grazda captures something that was lost. Whether the cleaned up, Disneyfied New York City as billionaire suburb is actually better than the rundown derelict New York City of Mean Street is a point of contention.

Mean Streets, like Grazda’s Leica camera, is a small affair. At nine inches by seven inches it is small for a coffee table book. The photos are presented without any captions, avoiding any interpretive distractions. (The captions, albeit minimal in description, are listed in the back.) The black and white scans have a gritty crispness. Don’t expect 4K clarity. Part of the charm is seeing the grain in the image. Mean Streets by Edward Grazda belongs in the bookshelf beside other photographic chronicles of New York City.