Me the People: How Populism Transforms Democracy 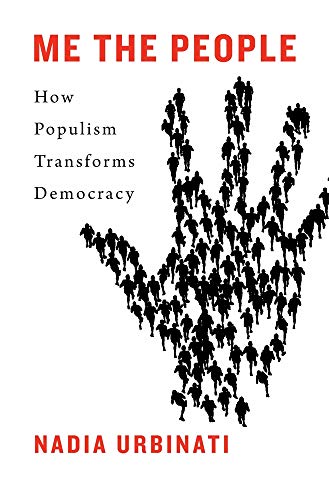 “In Me the People, Nadia Urbinati has produced an exceptional scholarly work on a highly relevant socio-political phenomenon.”

From Latin America and the United States to Europe, Africa and Asia, populism has a long history around the world. The term “populism”—a range of ideas referring to “people against the elite”—may not be new. However, it has undergone a marked resurgence in public and scholarly discourse in recent decades.

The 2016 US presidential election which Donald Trump won, in the same year the referendum on the United Kingdom’s continuing membership of the European Union which went in favor of leaving, the rise of Syriza (Coalition of the Radical Left) in Greece and of the Northern League in Italy, and the Hindu nationalist party, the BJP, coming to dominate in India are among the most conspicuous examples. However, there are others.

Me the People: How Populism Transforms Democracy by Nadia Urbinati is a new scholarly book. Urbinati, professor of Political Theory at Columbia University, specializes in modern and contemporary thought and the democratic and anti-democratic traditions. Her previous works include Democracy Disfigured (HUP, 2014), Representative Democracy (University of Chicago Press, 2006) and Mill on Democracy (UCP, 2002), which received the Elaine and David Spitz Prize as the best book in liberal and democratic theory in 2004. In these, Urbinati explores how conditions determine what form democracy takes.

A widely accepted interpretation of liberal democracy is that once a candidate or political party wins an election, the winner represents all, irrespective of whether they had voted for or against the winner. Against this liberal interpretation are various forms of limited democracy and authoritarian systems claiming to derive legitimacy by holding restricted elections and plebiscites.

The central thesis of Urbinati in Me the People is that populism is a new form of representative government based on a direct relationship between the leader and those the leader defines as the “good” or “right” people. Populism stretches constitutional democracy to its limits, her thesis goes on, and opens the way to authoritarianism.

That populism pushes constitutional democracy into retreat is evident where such movements are successful. They seek to occupy the spaces left by constitutional power. Urbinati identifies two factors in particular that militate in favor of populists’ success. One is the growth of social and economic inequality in which populism thrives. The other, “a rampant and rapacious oligarchy”—a relatively small group of powerful people that makes sovereignty a phantom. The book seeks to understand how populism transforms, indeed disfigures, representative democracy.

How does it happen? Populist leaders in their quest for power build their base by attracting supporters of mainstream parties. The process, which is not ideological in the traditional sense, inevitably drains support from parties on the Left and the Right, creates spaces and builds the movement of the populist leader. As a populist campaign gains momentum towards power, its leader confirms identification with “the people” and seeks to convince the “audience” that they are fighting a titanic battle against the “entrenched establishment.”

Urbinati points out that the construction of populism is rhetorical and independent of social classes and traditional ideologies, as previous and current populist leaders demonstrate. Sometimes, people equate populism with fascism, but the author differentiates between the two. Populism is “parasitical” on representative government. Fascism, on the other hand, does not accept that legitimacy flows from popular sovereignty. Fascism is the state and the people merging. For Urbinati, fascism is tyranny and a fascist government a dictatorship.

Me the People is divided up in four chapters, each with about a hundred or more notes. So the sources she uses are extensive. This depth of research enriches her scholarly work and establishes its credibility.

Urbinati argues that populism directs its hostility at the political establishment with the power to connect the various social elites. Populism asserts that this connection between the establishment and social elites undermines equality. Populist leaders take advantage of discontent to build public opinion in their support.

What follows is an analysis of arguments that populist theorists and leaders devise as they seek to demonstrate that the legitimate people coincides with only “a part” of the whole. Elections are purely ritualistic, for the engine of populism is unanimity. The main assertion of its supporters is that unanimity is more genuinely democratic because it is more inclusive and more unified, thereby acting in the name of the people.

Should populism be treated as an ideology? Or a strategic movement to remake political authority? Urbinati says that she approaches her study in both respects, but mainly concerns herself with the latter. In The Leader Beyond Parties, she explores the nature and style of the populist leader. Charisma and a façade of monarchic power are essential for the leader’s commanding stature. The promise of a “miracle” comes with a risk that the leader would appear to his people to have installed a new establishment once in power. But the establishment must be a thing of the past. So the leader must seem to be an insider without appearing to be one. And the difference between movement and power, and between outside and inside, must collapse.

Concluding her thesis, the author reminds us that populism in power is a form of direct representation in every respect. Populist promoters and politicians enter the scene strongly critical of the decline of party antagonism. They end up profiting from the same party cartel they chastise.

In Me the People, Nadia Urbinati has produced an exceptional scholarly work on a highly relevant socio-political phenomenon. Her line of argument is necessarily complex and deep. Her research is outstandingly extensive. Her expression is technical and nuanced rather than simple and suited for general readership. The book is an essential read for graduate students and researchers.

Deepak Tripathi is a British historian with specific focus on the Middle East and South Asia, the Cold War and America in the world and the United Kingdom. In 2013 he was elected a Fellow of the Royal Historical Society and a Fellow of the Royal Asiatic Society of Great Britain and Ireland. His writing has appeared in publications such as Al Jazeera, History News Network, CounterPunch, AlterNet, and others.