Me, My Cells, and I: A Survivor’s Seriously Funny Guide to the Science of Cancer 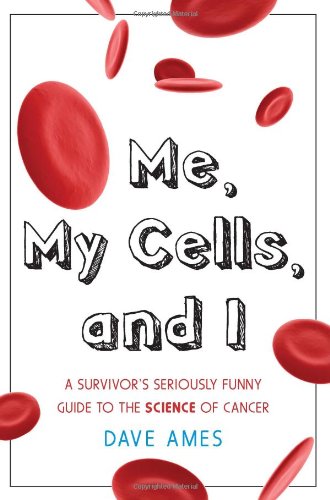 “Funny, informative, and irreverent, Me, My Cells, and I is perfect bedtime reading for a recently diagnosed prostate cancer patient—no matter what stage of disease is involved.”

Never before has there been a book with so many quirky explanations of science coupled with so likeable an author that the science simply doesn’t matter. If having a witty and proactive outlook on a late-stage cancer diagnosis has any connection to survival, author Dave Ames and his personal cancer journal entitled Me, My Cells, and I should be around for a long time.

Funny, informative, and irreverent, Me, My Cells, and I is perfect bedtime reading for a recently diagnosed prostate cancer patient—no matter what stage of disease is involved.

When Mr. Ames was first diagnosed with prostate cancer, he was working as a fly fishing guide, so he consulted about his case with several of the prominent physicians whom he had helped navigate trout streams. Whether or not he followed their advice is not obvious in his book because he investigates many options that are way beyond conventional cancer treatment.

At times it is not clear if Mr. Ames is really fleshing out new approaches to therapy or indulging his insatiable urge to entertain others. For example, during his ongoing inquiry, Mr. Ames balks not because his instructor tells him to meditate on energy forces as if he were an animal, but because he wants to be a manly bear—and the teacher insists that he think like a turtle.

When it comes to capturing how cancer care appears from the eyes of a frightened patient, this book is superb. Mr. Ames consistently uses his humor to cope with the fragmented service that passes as patient care.

He declares that “side effects may include getting a new doctor;” describes driving two days for a miniscule slot with a prospective oncologist as “more of an insult than an appointment;” and claims that internal and external qi manipulation seems to be “right out of the training manual for Jedi knights.” When he is required to undergo hormone therapy, he protests that it is “exponentially unnatural for a man to go through menopause at the same time as the woman in his life.”

He chuckles that the western mind rejects acupuncture because it can’t prove the existence of meridians by noting that it is hard to find a life force in a dead cadaver. And he even tries to consciously get qi flowing and establish a balance between yin and yang in the five energy elements within his body. He discovers that “It’s all connected. You make the choices. In traditional Chinese medicine, you matter. Not only that, you are matter.”

After getting very worked up about the importance of oxygen levels in and around normal and cancer cells, Mr. Ames is crushed to research further and discover a malevolent protein called HIF-1 that can manipulate these levels to cancer’s advantage. This, of course, undermines his hopes of using antioxidants in combination with radiation therapy to benefit his normal cells.

When searching for diets as allies against cancer, he is heartened to hear that the Budwig diet saved patients on their deathbed, but then grows less enamored when he is told that it involves delivering cottage cheese and flax seed oil to the patient by way of enemas.

In the end, after all his research is finished, Mr. Ames chooses hormone therapy and a conventional combination of radioactive pellets called “seeds,” which get implanted in his prostate gland, followed by radiation.

Even after treatment began, there is no peace. Mr. Ames experiences power outages in the middle of his radiation treatments more than once, and is forced to lay scared in the silence with his thin cotton gown soaked in chilling sweat. He describes his fear as he lay there: “Scrunch a bit this way and, when the power returns, I’d be frying my rectum. Scrunch a tad the other way, I’d be toasting my bladder.”

Dave Ames ends his book with powerful testimony of what it feels like to have a cancer center in one’s rearview mirror. He quickly masters living in the moment. He no longer needs to use his gift for humor to mitigate against fear. Instead he runs back to his beloved trout stream and jumps in, bringing relief from his hot flashes.

Mr. Ames recalls that there were times when he felt as if his spirit actually soared, and he could look down from the clouds with the circling hawks and see himself below. Oddly enough, he was the happiest he had ever been.