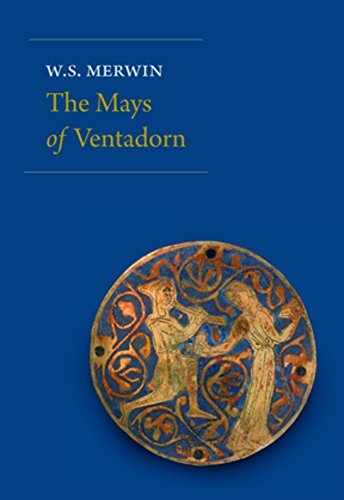 W. S. Merwin’s The Mays of Ventadorn beautifully combines literary autobiography with literary history: What is in fact personal for Merwin is presented as distant or impersonal, while various histories come alive through Merwin’s unique powers of attention and his lovely translations of poems by different troubadours.

Each paragraph of the book reads a little bit like a poem. And each poem translated in the book contains a hundred stories. If you enjoy Merwin’s lucid and impersonal writing style, his quiet, compact, and inimitable observations that go to the heart of our natural world, then you’ll love the experiences he unfolds in these pages.

“With the sweetness of the new season

woods fill with leaves and the birds sing

each of them in its own tongue (en lor lati)

set to the verse of a new song,

then is the time a man should bring

himself to where his heart has gone.”

These lines, penned originally in Occitan by one of the earliest and best known troubadours, Guilhem IX, Comte de Peitau and Duke of Aquitaine (1080–1127), translated here by Merwin, are not only “emblematic of all the love poetry of the troubadours,” but they also capture much of what this book contemplates throughout its pages: the language of love, and the love of language, which—when considered together—can compel one to travel across time and space, looking for where one’s “heart has gone.”

For Merwin, lines such as these seemed like “an invitation.” Though he read their work mainly in translation, Merwin accepted this “invitation” of the troubadours, and as a young poet, he journeyed first to visit with Ezra Pound in St. Elizabeth’s psychiatric hospital. After Merwin left, the two men continued a friendly correspondence. In particular, Pound’s note to “read seeds not twigs” resonated with Merwin. And so Merwin journeyed overseas to discover the seeds of the poems he loved, through the layered landscapes of France, to discover those “silent walls where the songs began”.

“It was a continuing treasure hunt,” Mewrin says of finding “the manoirs of all sizes, some of them reduced to being used as barns, with their towers crumbling and portals cemented over . . . trying to learn something of their current status, imaging life in them at one stage or another of their past.” This is a distance “both in geography and in time, a secrecy of its own,” he notes.

Throughout his time living in France, Merwin felt “the awareness of the deep past was inseparable from the lure of the land,” which lead him on. Wandering through the old European forests, Merwin recalls his childhood when he’d lay “hearing the maple leaves brush the house and the windows at night.”

Indeed, so much of this book is layered: past with present, here with there, life with death, love with loss, speech with silence. Like so many of Merwin’s brilliant poems, the clear layers of his prose are composed of an articulate silence, a meditative peace found primarily in nature, which connects us all: “I knew that I had strayed into an unguarded part of the past that had managed to remain coherent and in place, leading back from season to season, life to life, farther than I could imagine.”

As the book’s title suggests, Merwin devotes much of book to writing about Ventadorn, to describing the region of France where he and his wife lived and walked about, tracing the ruins and “the winding variety of the lanes . . . neat fences, open fields, banks above eye level, hollows falling away. The blackthorn (sloe) alternating with the whitethorn (the hawthorn, or may).”

In various places throughout the book, Merwin elaborates on the multiple meanings of the word may: “In the Occitan region the arrival of the month of May as the returning season of love had been celebrated with festivals since long before Christianity. The rites of spring were remnants of fertility ceremonies practice in the time of the Roman occupation and among the Celtic peoples long before that.” And in the first known love poems of the troubadours, we often find the hawthorn, also known as the mayflower: “The way this love of ours goes on / is like the branch of the hawthorn / that keeps trembling upon the tree . . .” The tree was named “may” because of when it bloomed: the spring, more specifically, during the month of May.

About halfway through the book, the reader finds the various denotations of the word “may” begin to cohere into a larger theme: May, the month. May, the month, patterned over the years, not just a single month in a single year, but the many months of May telescoping through the centuries. And the may (tree) or mayflower at the center of troubadour love poems, written over the many months of May, generations all cycling into bloom in the same region of France, centuries ago as well as today.

The same region of France Merwin visits in the 20th century is viewed through a period of modernization and industrialization as he travels back and forth, staying and leaving at different intervals. It’s as if each page in this compact book were some kind of translucent map drawn over time that provides inscrutable details about the nature of life, each detail overlaying the next, adding to the richness—and to the perceived distance or closeness—of our different experiences.

“Distance is a measure of absence,” Merwin says toward the end of the book, a recurring theme in troubadour poetry and love poetry throughout the world: “The tenor of longing itself is part of that, and amor de lohn (far away love) became essential to the tradition of the troubadours.”

At the same time, this book does not pretend to be complete nor scholarly. Rather, it is a personal take, one poet’s slice through time, revealing a cross-section of where the “heart has gone,” and where it continues to go today.

As long as poets like Merwin continue to write of love and loss, and seek love’s source wherever it may hide (returning to Pound’s advice to read “seeds not twigs”), “Ventadorn will not lack for a singer / since she who is noblest and knows most / about love taught me all I know.”