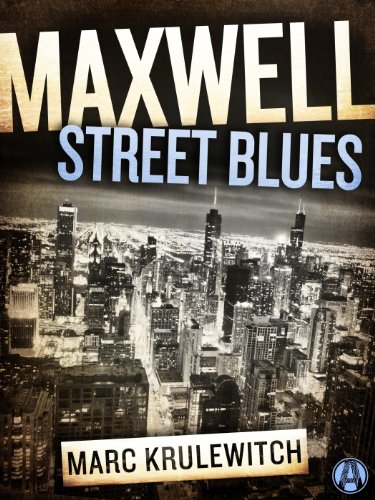 “Marc Krulewitch has done a marvelous job in introducing this trilogy. He’s developed a multi-dimensional protagonist and chosen a venue that can generate a million bad guy/corruption stories.”

A quintessential noir P.I. novel, Maxwell Street Blues features all of the important elements: big city setting, sleazy meeting locations, grease ball bad guys, crooked cops and politicians, and several interesting ladies who may or may not be on the right side of the law.

Jules Landau’s family tree is heavily laden with bad apples—thugs who made a living by cheating, stealing, and if need be, killing. So it’s with much dismay that this fresh college graduate, Jules, chooses to become a private investigator.

His octogenarian ex-con father, who suffers from a number of maladies, is not happy with Jules. That is until their close friend, Snooky, a CPA, winds up dead on a trash heap on Chicago’s famed Maxwell Street. Chicago cops drag their feet and mostly ignore the homicide since some of them are involved with Snooky’s clients.

The well-liked bookkeeper attracted clientele who needed to hide large sums of money. Everyone who used Snook’s services thought he was the best at what he did. All was well until a huge real estate deal involving Maxwell Street becomes Snooky’s undoing.

Upset that someone would murder his dear friend, Jules’s mobster dad enlists the aid of his rookie PI son to investigate Snooky’s murder. In the process, Jules learns Snooky kept a detailed journal of all his customers. The book turns out to be a treasure trove of names of Chicago politicians and cops who took bribes and eliminated their competition.

As the story progresses, the rookie PI gets a taste of what being a PI in big city has to offer. He suffers beatings and becomes involved in unsavory situations, some involving guns—yes, he’s nearly murdered.

Add into the mix a tattoo parlor frequented by the dregs of society, a meth addict, an aspiring nosey journalist, a university chancellor, a Greek detective who’s not above bending the law, an Internal Affairs cop who holds a grudge, and a couple of beautiful women who keep entirely too many secrets, and the result is a very intriguing story that will undoubtedly hold the readers’ interest.

Marc Krulewitch has done a marvelous job in introducing this trilogy. He’s developed a multi-dimensional protagonist and chosen a venue that can generate a million bad guy/corruption stories. The author has set the bar high for the next book in the series. I think he can deliver.