Maximalist: America in the World from Truman to Obama 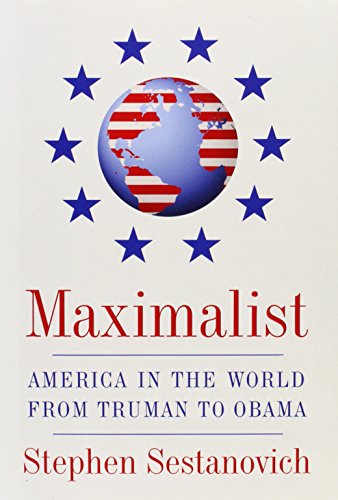 “Maximalist is a highly readable account of American engagement during the Cold War and the War on Terror. It provides a commonsense means to assess American military and diplomatic policy without the fog of political rhetoric.”

The inauguration of Barack Obama to the presidency was seen by the electorate as a symbol of change. Over the next several years and a successful re-election, the Obama administration was allegedly a repudiation of the previous eight years of a saber-rattling foreign policy and its intelligence failures (both metaphorical and literal).

Maximalist: America in the World from Truman to Obama, by Stephen Sestanovich, examines foreign policy and military engagements of the United States in the world following the cataclysm of the Second World War. Sestanovich establishes a working dichotomy between two different styles of statesmanship: maximalism and retrenchment. He analyzes the different presidencies, weighing global challenges against both promised effectiveness and ideological purity.

Sestanovich was a career diplomat, working as ambassador-at-large to the Soviet Union under Clinton and working in the State Department in the Reagan years. Currently, he teaches International Diplomacy at Columbia University. His diplomatic experience and intellectual credentials make Maximalist a fascinating read.

Experience working with both parties as a career diplomat gives Sestanovich an opportunity to cut through the simplistic (and frankly insulting) rhetoric that poisons political campaigns and Meet the Press cheer leading. The global challenges facing the United States in its relations with other nations is revealed as a constant interplay between military retaliation and retrenchment. These actions, mostly taken as reactions against crisis, must be done in such a way to preserve the electoral integrity of those in power. Appealing to the base weighs against solving the challenge in the most efficient manner possible.

The chronicle unfolds with curious patterns emerging. Sestanovich effectively debunks the mythologies of both Right and Left political claques. Democratic Presidents like Truman, Kennedy, and Johnson engage in aggressive policies of maximalism while Republican Presidents like Eisenhower and Nixon carry out policies of retrenchment. A hyperventilating blather blanketing political discussions and the American gift for historical amnesia have buried these trends of American foreign policy.

Beyond the stereotypical examples (Truman in Korea, Johnson in Vietnam), Sestanovich gives other examples like Presidents Reagan, George H. W. Bush, and Clinton doing a combination of maximalism and retrenchment. For example, Ronald Reagan, the consummate Cold Warrior, combined a maximalist policy in the Middle East and Central America with a revolutionary approach to nuclear disarmament with the Soviet Union.

The only real quibble with this account is its limited scope. A backward analysis would have been fascinating and an interesting application to the maximalist versus retrenchment rubric. While the narrow scope is circumscribed by the Cold War and the nuclear threat, it would be a true test to the theory to see it applied to the expanding American Empire and its actions during the Gilded Age.

But this is mostly wishful thinking, since continental conquest and colonization may be more in the purview of a historian than a diplomat. This minor criticism aside, Maximalist is a highly readable account of American engagement during the Cold War and the War on Terror. It provides a commonsense means to assess American military and diplomatic policy without the fog of political rhetoric.