In the Matter of Nikola Tesla: A Romance of the Mind 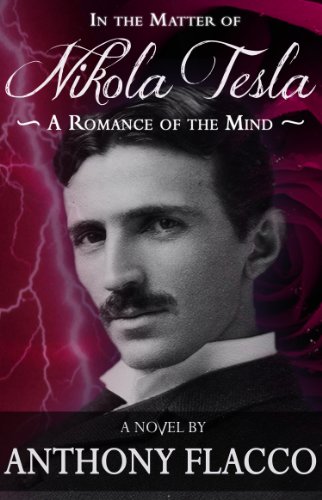 “It is a monumental task, this getting into the mind of a man as complex and extraordinary as Tesla. Anthony Flacco is up to the task.”

Nikola Tesla had to be stopped.

It was all right when he was repairing and refitting dynamos for the Edison Electric Company, but he had gone too far. Here he was designing a system by which the synergy between the earth and the stratosphere could provide universal wireless power to the entire world—absolutely free.

Free. That was the word that stuck in Thomas Edison’s throat—his, and George Westinghouse’s, and J.P. Morgan’s, all of whom had invested millions in setting up what would later be called “The Electric Grid.” As Morgan said, “You can’t put a meter on it.”

None of them believed that Tesla could actually pull it off, but he had a pretty good track record. If anyone could build a wireless, universal, free source of electricity, this upstart from Austro-Hungary could.

But they could not idly sit by and watch their investments disappear. They would have to stop him by whatever means necessary: fraud, espionage, government investigation, or sabotage.

Anthony Flacco’s novel In the Matter of Nikola Tesla: A Romance of the Mind reads at times like a psychological exploration worthy of Dostoyevsky, at other times like one of John le Carre’s espionage novels, and even sometimes like Joseph Campbell’s mythical “hero’s journey:” a struggle to achieve his destiny amid overwhelming obstacles, one of which is himself.

This Tesla is a divided man. He exists in two unequal worlds, the world of the mind in which he unceasingly occupies himself with formulas, materials, resistance, pressure, and mechanics, and the other world, the one he called “the hard world,” wherein the combination of his body and a fragment of his consciousness that he calls his “automaton,” functions, shaking hands, speaking at social gatherings and business meetings—in short, what we know as getting on in life.

He is ambivalent about material objects and money, which he sees only as means to continue his work. And what a body of work it is! He is a prolific inventor who is awarded approximately 300 patents.

Tesla can create in his mind visions of complete working models of machines that do not yet exist, putting them into motion, changing them, redesigning them until they work perfectly, and then only does he make drawings so they can be assembled by his loyal assistants. By that time he is only copying what he projects on the screen of his imagination. He never makes corrections. The first draft is the last.

Where does his inspiration come from? Explanations regarding the historical Tesla range from the purely psychological to the absurdly fanciful. That Tesla experienced intense flashes of light in his head, debilitating him for a short time, followed by intense creativity, is well documented and indeed may have seemed to some otherworldly. He described such episodes in his autobiography:

“I suffered from a peculiar affliction due to the appearance of images; often accompanied by strong flashes of light. . . . The theory I have formulated is that the images were the result of a reflex action from the brain on the retina under great excitation. They certainly were not hallucinations.”

In Anthony Flacco’s novel these flashes are precipitated by a mysterious muse. In the preface, author Flacco alludes to a series of interviews Tesla gave to John O’Neill of Collier’s magazine in which he speaks of his muse. Regrettably, those notes were destroyed.

Mr. Flacco calls the muse Karina. But is she pure invention? If not, who is she? Again, speculation abounds. Some adherents to a quasi-religion who shall go unnamed believe that Tesla has reincarnated as a man who calls himself Tera-El and that the someone named Karina is his interlocutor to the spirit world.

Karina provides the romance in the book’s subtitle. He meets her while he’s a young man in Hungary. She is a girl he tutors, without a great deal of success, and with whom he is desperately in love.

Upon hearing that she has died suddenly of a fever, he runs out of the house in a pouring rain and stands at a distance in the cemetery watching her funeral. He falls sick, and in his grief he tries to create the image of Karina in his room the same way he has induced visions before.

“The air began to shimmer as if heat waves were rising through it. He kept his gaze focused there while the ‘heat waves’ grew thicker.”

Slowly the elements resolve into the spirit and image of the dead girl. Astonished, he asks her name and she responds “Karina.” He asks her what his own name is and she answers with a smile, “You are Nikola.”

“The voice sounded exactly as he recalled—clear, sweet, feminine, and slightly low in timbre. But at that moment the image gave him a wan smile and added, ‘And, you’re under the impression that you created me.’”

Karina appears to Tesla periodically throughout his life, and each time she does, she brushes his face with her fingertips and the familiar white light flashes in his brain.

Mr. Flacco wisely allows Karina to remain undefined. She may be just his imagination, a metaphoric trigger that causes his brain to flood with creative ideas, or she may be the ghost of Karina, his true muse. Mr. Flacco’s Tesla vacillates between believing it an angel, and fearing, Hamlet like, that she is a demon sent from hell to damn him. Tesla’s indecision results from the dichotomous influences of both his minister father and his clairvoyant mother.

Eventually, Tesla decides he doesn’t care—angel or demon, he longs for her, obsesses about her, cannot live with the thought that she will not return to him. She is his love, his inspiration, his goddess. It is the presence of Karina that elevates Mr. Flacco’s novel from the commonplace into the realm of the sublime, the realm of myth.

It is a monumental task, this getting into the mind of a man as complex and extraordinary as Tesla. Anthony Flacco is up to the task. He has written a novel you will not want to put down for the intricacy of its plot, the believability of fully realized characters, and above all the subject matter of perhaps the greatest visionary genius of the 20th century—a man envied, mistrusted, and hounded by lesser men than he because his vision rose above petty commercial or political concerns.

Nikola Tesla was a man out of his time. In that sense, he may well have been alien.