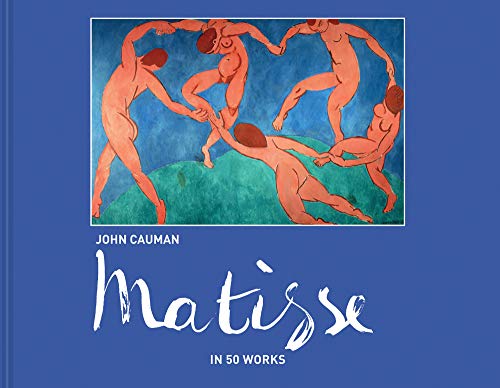 “This book, with its colorful depictions of Henri Matisse's 50 works and its explicit, detailed descriptions, is a gem and a treasure about an artist whom you thought you knew.”

Henri Emile Benoit Matisse (1869–1954), French artist, is known as the father of modern art. He made his first colored pictures at the age of 19, when bedridden with an intestinal ailment. When his mother gave him a set of colors to copy, his career as an artist was born. He always associated art-making with restoration to physical and mental health. He was a draughtsman, printmaker and sculptor, but was best known as a painter.

Matisse was influenced by Goya; Chardin, the symbolist painter; Gustave Moreau; and the impressionist painter Pissaro. He also became good friends with Picasso, and incorporated Cubism in his later paintings. "The visual dialogue between the two artists, both of whom were synthesizing tribal art and Cezanne in their work, was instrumental both in the development of Matisse's art and in the evolution of Picasso's Cubism."

The classical artists of the early 19th century painted in their studios. Portraits were true to life, emphasizing line and detail rather than color. The impressionists worked outside and created loosely painted and intensely colored compositions. (see Brothers with a Turtle.) Matisse was largely known for his intense use of light and color.

Since Matisse grew up in a textile town, he became aware of fabric designs. His painting Red Madras Headdress, a portrait of his second wife, Amelie, shows the interplay of decorative patterns. In comparison, Le Luxe 11 is a simpler work with flattened color. He often painted two versions of a portrait, the first closer to observed reality and the second more abstract and decorative. (see the paintings on music and Blue Nude, the first painting incorporating African tribal sculpture.)

In 1908, Matisse opened his own school of art in Paris that became very popular with his students. "What I am after, above all, is expression . . . His goal is not to imitate nature, but to condense the sensations he receives from nature and produce an equivalent that realizes the essential character of what is portrayed." (See Harmony in Red.)

His travels to North Africa and Iran produced four autobiographical paintings: The Pink Studio, The Painter's family, Interior with Aubergines, and The Red Studio. However, Amelie thought he went too far when she saw one of her portraits. It was too abstract. Her face was a mask from Cabon, Central Africa. (See Portrait of Madame Matisse.)

Matisse, an amateur violinist, had a lifelong interest in the relationship between music and the visual arts. "I had decided to put colors on flat and without shading. I knew that my musical harmony was represented by a green and a blue . . . completed by a tone for the flesh of the figures." He's most famous for his paintings of dancers. The Dancer depicts five female naked figures dancing in a circle holding hands. His painting titled Music depicts five naked male figures, a violinist, a piper, and three singers.

The book Dance Me to the End of Love is based on this theme. It contains a poem by Leonard Cohen, famous Canadian poet and composer, and paintings by Henri Matisse. This book is "a deliriously romantic song by Leonard Cohen, visualized through the sensual paintings of Henri Matisse," who came to be known as "a Mozart in color." Cohen's song is a lyrical tribute to the miracle of love. "Colors have a beauty of their own which must be preserved, as one strives to preserve pure tones in music…"

Matisse and Andre Derain were the leaders of a style of painting called "Fauvism." Their followers were called Les Fauves, which means the wild beasts. The name stems from their exhibition in the Salon d'Automne in 1905, when the critic Louis Vaux looked at one of the Renaissance style sculptures surrounded by an "orgie of pure tones" and exclaimed: Donatello among the wild beasts. "They owed their name to their open disregard for the forms of nature and their enjoyment of violent colors." (E. H. Gombrich, The Story of Art.) (See Woman with a Hat.) Fauvism was the first avant-garde artistic style of the 20th century.

Later in life, Matisse's paintings became more cubist, as he was influenced by his friend, Pablo Picasso. Examples: Goldfish and Palette, the Moroccans and Gourds. He also became bedridden with an abdominal cancer. Since painting and sculpture was too difficult physically, he created paper collages, or decoupage. Some were so large that they were transformed into murals. The Swimming Pool is the most ambitious and largest of his cut-outs. This frieze of blue cut-out moving bathers pasted onto white paper is now housed at The Museum of Modern Art in New York. The forms of the bathers decompose and reassemble "at times bursting the bounds of their white horizontal support."

"I was thirty-five then—to this cut-out—I am eighty-two—I have not changed . . . because all this time I have looked for the same things, which I have perhaps realized by different means." Henri Matisse died of a heart attack at the age of 84, on November 3, 1954.

This book, with its colorful depictions of Henri Matisse's 50 works and its explicit, detailed descriptions, is a gem and a treasure about an artist whom you thought you knew.

Carol Katz took a guiding course at the Montreal Museum of Fine Arts and developed her own tours, one of which was Landscape artists of the 19th Century. In addition, she  gave guided tours of various artists' exhibitions at the Cote St. Luc Public Library.