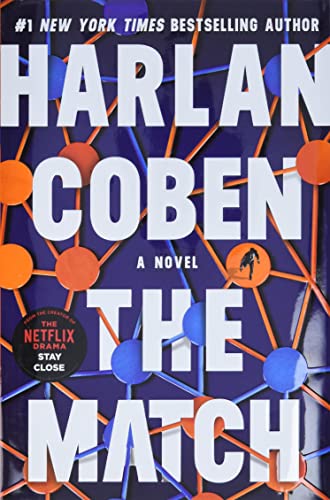 Harlan Coben is often called a modern master of the thriller, and The Match is another satisfying mystery sure to please his legions of fans. He has a particular talent for pacing, keeping readers invested in stories through all of their twists and turns.

The Match is a sequel to 2020’s The Boy in the Woods, and there are references to past events sprinkled throughout the book that may be confusing to anyone jumping in without having read the previous book. The beginning is a bit confusing, as it builds off tensions built between characters who have complicated backstories that new readers aren’t privy to, but as the new story develops, those details die down and are limited to small mentions here and there.

Wilde is the previous book’s titular boy in the woods—he was found as a small child wandering through a forest and has few memories from that time in his life. The Match starts out with him giving into temptation with a (half-hearted) search for relatives through ancestry websites. When a match comes back, he meets a man who says he’s Wilde’s father, but then abandons the entire venture, as he doesn’t want to be a burden on anyone’s life.

However, Wilde gets another message before he removes himself from all the databases he signed up for—and though the communication has a tone of desperation, Wilde decides to ignore it and retreats off the grid.

Coben seems to know he has a good thing in his main character, and these books could be seen as a strong foundation for a potential series. Wilde is understandably stoic and serious, but other characters who are close with him, including his deceased best friend David’s widow and teenage son, are able to bring out moments of humanity that form a more fully rounded character.

The development of Wilde’s relationships with Laila and Matthew provides the story with a lot of heart as they all sort through their complicated feelings surrounding how their lives are tied together. And Matthew in particular provides moments of much-needed levity with gentle teenage quips. Coben has a strong feel for how to write found families that readers will connect with.

Wilde eventually reconsiders his decision to ignore his other possible relative, but when he tries to answer months later, the profile has been deleted. Luckily, the woman who found him in the woods (and David’s mother), is Hester Crimstein, noted attorney and a frequent side character in many other Coben novels. Between her digging and the convenient investigative skills of Wilde’s foster sister, Rola, he’s able to get more information and start searching for his presumed relative in earnest.

Wilde finds that the second relative is a disgraced reality TV star who has disappeared without a trace. During his search, Wilde sets off the alarms of an anonymous internet vigilante group who have taken it upon themselves to get revenge on people who they feel have gotten away with especially bad online bullying.

There is a lot going on in this book, from the exploration of biological and found family, to the side-effects of temporary fame, to a condemnation of internet trolls, and the story feels like it could have been honed a bit to make things a bit less convoluted. The ending and switches in perspective in particular feel a bit more thrown together than expected, and Coben’s signature second twist comes a bit out of left field.

However, the richly drawn characters and suspense overcome these small issues to make a satisfying thriller that will keep readers turning the pages to the very end.