Master of the Game: Henry Kissinger and the Art of Middle East Diplomacy 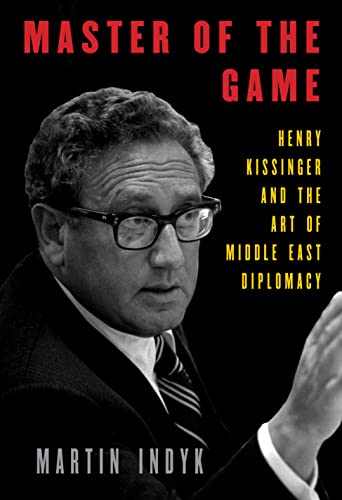 Forget what you think you know about Henry Kissinger—the professor-careerist who left Nelson Rockefeller to get a job with Richard Nixon, the security assistant who expanded  the Vietnam War into Cambodia, the realpolitiker who virtually deserted Taiwan to “normalize” relations with Mao’s China, the arms control negotiator who let the Soviets keep building nuclear-weapon submarines to nail down limits on strategic weapons, the private sector entrepreneur who limited his critique of China to keep consultant fees coming. Put aside any qualms about acknowledging that many supposed successes in this world masking a man or woman who believes that the ends they seek justify the means. Whatever else Kissinger did, Martin Indyk’s book will show why the Secretary of State for Nixon and Gerald Ford was a master of the game in Middle East diplomacy.

The author is himself a master as well as an historian of diplomacy, having advised several presidents on the Middle East and served as US Ambassador to Israel and as President Obama’s special envoy for the Israeli-Palestinian negotiations from July 2013 to June 2014. He is now a senior fellow at the Council of Foreign Relations. Earlier he served as vice president of the Brookings Institution.

Indyk sums up Kissinger’s four ambitions as the Yom Kippur war raged in 1973: first, ensure that Israel prevailed over the Soviet-backed Egyptian and Syrian forces; second. prevent a humiliating defeat for Egypt so that President Anwar Sadat could enter peace negotiations with Israel with his dignity intact; third, prove to the Arabs that only the United States could deliver meaningful results for them at the negotiating table; and fourth, maintain the US “détente” with Leonid Brezhnev’s Kremlin while working to undermine Soviet influence in the region.

Kissinger’s patience and persistence were remarkable. He served a president whose anti-Semitic prejudices led him to taunt Kissinger about his Jewish identity—a humiliation that Kissinger did his best to abide. In time, Kissinger found that his Jewishness helped his Middle East project. Israelis trusted him as a member of their tribe, while Arabs hoped he could deliver Israeli concessions.

Reviewing the relevant documents, interviewing the major players (including Kissinger), and tapping his own experiences, Indyk details the strategy and tactics Kissinger employed in pursuit of his four goals. The master of Middle East diplomacy fulfilled these goals to a remarkable degree—especially by comparison with the failures of most subsequent efforts at peacemaking.

Kissinger, like Metternich, Castlereagh, and Bismarck in the 19th century, sought order rather than grandiose schemes to end the region’s conflicts, promote democracy, or overthrow regimes. Without this master at the helm, Kissinger’s order unraveled, causing immense human suffering and diminishing America’s ability to influence events there. Kissinger grants that Jimmy Carter mediated an Egyptian-Israeli peace at Camp David but did nothing to resolve the Palestinian question. This failure was so significant that the US ambassador to Egypt, Hermann Eilts, resigned from the Foreign Service.

Do human affairs always “progress” over time? Do politicians and publics learn from history? Indyk’s book answers “no” to both questions. Compare the empathy Kissinger developed to the bottom-line requirements of all the key actors—Anwar Sadat, Golda Meir, Hafez al-Assad, King Hussein, King Faisal, Moshe Dayan, Shimon Peres, and Yitzhak Rubin—with the pro-Israeli, vanity projects (Indyk’s term) of the Trump administration. After Washington moved the US embassy to Jerusalem, the Palestinians refused to speak with any Trump administration officials—the situation bequeathed by Trump to the Biden administration.

Master of the Game is a huge but also quite readable and authoritative book tracing in detail the moves by Kissinger and the major players in the Middle East. To absorb its facts and insights will be necessary or anyone seeking to understand (or even ameliorate) a set of deep and emotion-filled conflicts. Arab-Israeli relations, conjoined with the policies of Iran, remain a threat to regional and world peace.