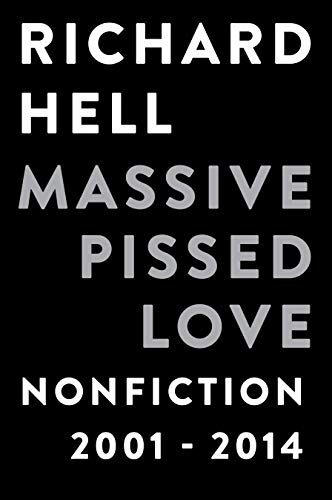 “A rewarding collection whether read straight through or sampling here and there.”

Richard Hell makes his voice known on subjects as diverse as film, music, art, September 11, and photography. He calls his new essay collection Massive Pissed Love: Nonfiction 2001–2014 and in the Author's Note, he likens arranging the essays to sequencing an album.

The essays range in length from only 500 words to much longer pieces. The former punk rock frontman of the Voidoids also explains how the chronology shouldn't be taken too literally, since there are pieces that go back to the 1990s.

Besides this collection, Mr. Hell has written novels and an autobiography. Coming to New York City in the sixties to live as a street poet, he became involved in the punk scene. Lately his work has branched into film criticism, speeches, and exhibit catalog articles.

The best part of any essay collection is the ability to hop, skip, and jump from topic to topic. He writes about everything from the interior of CBGB's, Nathanael West, Christopher Wool (a photographer), Robert Bresson, Larry Clark, Jean-Luc Godard, and Gérard de Nerval. The presumption could be made that Hell's writing is somehow a break from his punk origins, but the writing belongs to a larger aesthetic continuum. His music days may be behind him, but he remains a taste-maker, an aesthete, and a verbal stylist. In his punk days, he sang “Love comes in spurts.” Now he focuses that raw poetic energy into sharp critiques and literary love letters to his favorite poets, writers, and musicians.

An early essay has Hell discussing the aesthetic merits of The Velvet Underground versus The Rolling Stones. After he lays down his argument, he writes one of the best descriptions of rock and roll's appeal to the young, saying, “Rock and roll is wallpaper, but tendrily wallpaper, on a wall of sound, and the wall surrounds a way of life, various ones for every great rock and roll maker, and in each of those worlds the song is like a cup, and in that cup is the lead singer's voice. Elvis's or James Brown's or Dylan's or Mick Jagger's or Lou Reed's. Sneers and swagger are almost always ingredients.” Another compelling piece of wallpaper is Phil Spector's trademark wall of sound.

Throughout the essay, he compares Jagger's sneer to Reed's nonchalance. Later in the book, Hell writes a review on Sonic Youth's Goo, the group a musical descendant of the Velvets.

In another example of Hell's prose style at its most lush, he describes the interior of CBGB's, the infamous New York City club. Numerous punk and New Wave acts made their name in the dank dirty confines of the little club. Hell’s description provides a physical portrait of its insides.

“It took only three or four years for the place to acquire the garish veneer within that's become its distinguishing mark: not the place's deathless overall wino-dive griminess, not the long procession of compact neon beer signs dangling like corrupt flags or coats of nauseous arms above the narrow public walkway behind the bar stools, not the blunt, ribbed, white tunnel-roof of canvas overhead outside with its ugly “CBGB and OMFUG” logo, . . . No, it would be a separate consequence of Hilly's stunning and consequential inertia that would ultimately proclaim his physical domain most perfectly—namely, his lack of interest in removing any defacement of the club's interior.” Later in the book, Hell writes a memorial for the same Hilly, Hilly Kristal.