Massive Manga: How to Draw Characters, Animals, Vehicles, Mecha, and So Much More! 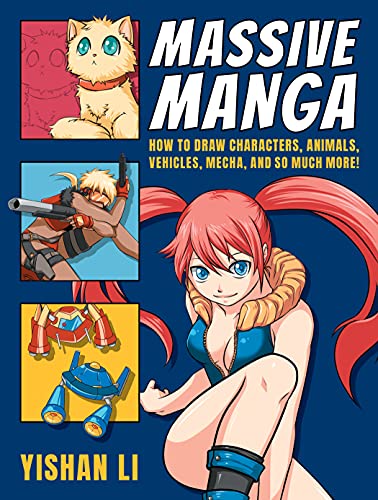 “With easy-to-follow instructions, clear examples and delightful colorful illustrations, this is a useful book for beginning and advanced artists, willing to try this unique Japanese art form.”

Manga, samurai warriors, ninjas, shounen, shoujo, Astro Boy, magical manga. Have you ever come across these foreign sounding terms and wondered what they all mean?

The term "manga" refers to the comics and graphic novels of Japan. It developed in the 19th century and is still popular today as a Japanese art form in many countries of the world. This genre has another term called "anime." There are many subgenres to manga, aimed at different age groups. Stories are romantic, whimsical and even violent. They portray Japanese icons such as samurai warriors and ninjas. Recently a genre called giant-robot has become very popular.

This book will help you "to develop some of the basic features and drawing principles that have helped make manga such an inspirational and groundbreaking art form." Fans today will have fun creating stories of their own, while drawing manga characters. The cover itself, with its eccentric colorful cartoon characters will peak the readers’ curiosity.

Subjects include: materials and equipment, and detailed instructions on how to create each part of the body. Each chapter is devoted to one part, such as hair, hands and faces, clothing, as well as animals, weapons, and vehicles. It also outlines several ways to produce manga art, such as by hand or computer. Materials include papers, colored pencils, brush pens, erasers, etc. "Experiment with different papers . . . Watercolor papers can be ideal if you like using lots of wet color like inks to render your manga . . . A mannequin can be placed in different poses, helping you to visualize action and movement."

There are explicit instructions on how to scan a piece of artwork on computer, using various programs such as Adobe Photoshop. Brown, green, blue, and yellow stark colors of the faces and their wild hair are examples of specific drawings. "A person's face says a great deal about their personality and this is an important factor when drawing animated figures." The author shows how to draw a face, adult or child, capturing gender, mood, and personality. For example, the angle of the mouth and eyes can show anger or happiness. Yishan Li uses the drawing method of dividing each face into four sections, making vertical and horizontal lines, also explaining the importance of light and color tones.

In the chapter on noses and mouths, the author explains the importance of using perspective for background scenarios. "Once you start to draw different scenarios for your manga characters, you will also want to draw on a range of different expressions." The ears should look the most realistic. The chapter concludes with his method of expressing anger, surprise, happiness, sadness, and evil through the eyes and mouth.

"The real fun in creating manga characters lies in choosing their crazy hairstyles. Long or short, straight or wavy, spikey or loose, goes for both boys and girls." The chapter on hair outlines, in detail, the steps in creating these shapes. The hair could be green, purple, brown, or blue. Two tones of the same color plus white creates complex highlights.

The section on the body deals with proportion and poses. "Body proportions work on sevenths . . . where the head is one-seventh, the torso is roughly two-and- a-half, and the legs roughly three-and-a-half. Figures are lean and muscled in men and shapelier in women." There are pages showing simple anatomy using mannequins, illustrating that the body can be drawn as a series of geometric shapes, dancing, sitting, standing, jumping, etc.

Hands and arms can be challenging to draw convincingly. But "once mastered, you can adapt these examples to come up with poses of your own design." The book shows the anatomy of the arm and leg showing the skeletal and muscular structure. In order to draw painted nails, one must get the perspective right. "Hip-hop" hands are especially fun to make with all the different twists and shapes (see the illustrations of hip-hop hands in this section)."It is important to try to capture the movement of the legs as they keep the jumping character off the ground. There will be tension in the leg muscles and both the feet should be flexed." The pictures on these pages illustrate this point in graphic detail using manga characters.

The chapter on clothes shows the reader how to find inspiration whether it's modern-day people or those of times gone by. The unique cartoons are of uniforms, seasonal clothes, and materials such as polyester, cotton, lycra, silk, and wool. "A character's clothing says a lot about his or her personality. From the menacing mask of a medieval knight to the ditsy striped stockings of your friendly waitress, there are all sorts of ways to make manga characters individual."

Ninjas are popular figures in manga art. "Their characters are based on ancient Japanese warriors, whose activities were often clandestine. The clothing is mysterious, while the pose is very masterful." There are court dresses and suits, Roman Stola (a full-length tunic style garment) and a toga. Sinister colors are often used when drawing Sci-fi bounty hunters.

Yishan Li summarizes the basic principles of drawing, such as light, color and perspective, using cartoon manga characters. With easy-to-follow instructions, clear examples and delightful colorful illustrations, this is a useful book for beginning and advanced artists, willing to try this unique Japanese art form.

So, readers, pick up your pencils, pens, erasers, papers and/or computers and have fun drawing ninjas, samurai warriors, bounty hunters, and medieval knights, creating your own whimsical stories with dinky magical manga.

Carol Katz took a guiding course at the Montreal Museum of Fine Arts and developed her own tours, one of which was Landscape artists of the 19th Century. In addition, she  gave guided tours of various artists' exhibitions at the Cote St. Luc Public Library.