The Mask of Fudo: Book 1 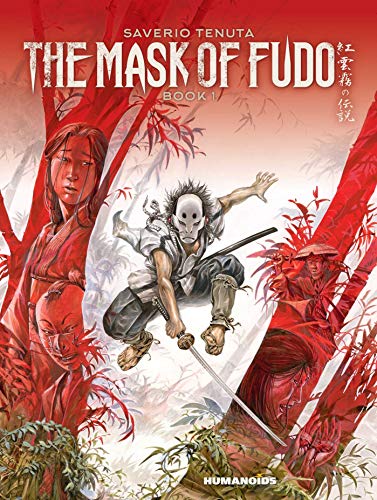 “Although the painterly art style and attention to environmental detail provide much to admire visually, narratively this is yet another joyless and bloody tale of a man sent on a rampage of vengeance by the rape and abuse of a female loved one, in a market that has seen that story all too many times before.”

In this graphic novel by Saverio Tenuta, a boy named Shinnosuke calls on the power of an ancient and demonic mask to get revenge on the men who kidnapped and raped his sister.

The story shares a setting with the artist’s other works, Izuna and Legend of the Scarlet Blades, which is clearly based on historical Japan. Script and artwork alike show a fair degree of familiarity with the source, but some of the choices are puzzling: footnotes helpfully define oni (as “a supernatural demon or devil”), teru teru bozu (“a handmade doll or talisman thought to have magical powers that bring good weather”), kuro (“black”), and bonze (“a Buddhist monk”)—the latter two of which could easily have been rendered in English without loss of nuance—but the text doesn’t footnote bakufu, matsuri, daimyo, shinobi, waraji, netsuke, and other terms far less familiar to the average Western reader than oni.

The names are also occasionally puzzling. They’re given in Western order, and there is an odd juxtaposition where the given names of Shinnosuke’s mother (Nobu Hirukote) and his nom de guerre (Nobu Fudo) are apparently the same. Since Shinnosuke’s mother is abusive and he appears to loathe her, it’s unclear why the connection would be there, though this may be explained in a later volume. Also, the family name of the shogun is Fujiwara—an extremely famous name from Japanese history, but one whose heyday predates the existence of the shogunate, creating a somewhat dissonant result.

Two quibbles are somewhat more troubling. First, the main characters are described as hinin, which (along with eta) was an “outcast” or “untouchable” class in historical Japan—but the narration confusingly seem to conflate this with the Hirukote clan, saying that “a few rare hinin had survived by coming together in the small village of Ose.” And second, the magic of the Hirukote, which is revolves around the worship of Hiruko no Kami, “the leech-child deity,” is referred to as Mikkyo—which in the real world is the term for the Vajrayana practices of Shingon, Tendai, and Kegon Buddhism. Linking this real religious term with something clearly ominous and possibly evil is a questionable decision.

There is little in the way of morality here, regardless. A samurai, upon encountering Shinnosuke’s sister Mikiko, immediately decides that he should rape her; although Shinnosuke stops him that time, their mother later sells her daughter without hesitation in order to strike a deal with that same samurai and his master. On the one hand, it’s worth pointing out that the roles of women in this first volume are limited to sexual objects, an abusive mother, and a ninja girl of minimal clothing and questionable sanity (she constantly refers to herself in the third person) . . . but on the other hand, the men are not much better.

Although there’s a power struggle on between the emperor and the shogun, there’s no evidence to suggest that either side is better than the other. The rapists work for the emperor, and Nobu Fudo works for the shogun. Shinnosuke’s training at the hands of a shinobi (ninja) cult, seen in the flashbacks that occupy the majority of this volume, is a pageant of brutality and disposable human life, until the narration says of him that “if Nobu Fudo’s heart could still feel emotion, he would be jubilant. But there is nothing but embers left in his chest, and the flames of revenge still burn.”

Although the painterly art style and attention to environmental detail provide much to admire visually, narratively this is yet another joyless and bloody tale of a man sent on a rampage of vengeance by the rape and abuse of a female loved one, in a market that has seen that story all too many times before.