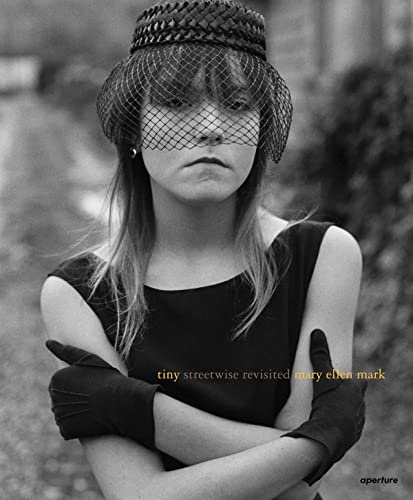 In 1988 Mark released a book of photography called Streetwise. It captured the gritty and violent world of Seattle's Pike Street. John Irving writes about Pike Street's “children . . . who must conduct their dreaming in the presence of expediencies far darker than most Americans can imagine.” He continues, “[Y]et the teenagers of Pike Street were holding their own—pimps, prostitutes, and petty thieves, they were eating out of dumpsters, falling in love, getting tattooed, being treated for a variety of venereal diseases passed on to them by their customers.”

Mark's photographic chronicle is an extension of Streetwise, a 1984 documentary by filmmaker Martin Bell. Beyond the lurid subject matter, the photographs present their subjects as possessing both individual agency and personal dignity.

“Tiny” began as a street kid, occasionally working as a teenage prostitute and getting high with friends. Because the photographs present a long-term photographic record of Tiny, the project eschews both the cheap sentimentality of an inspiration story and the ice-cold objectivity of a sociological project.

Through the passage of time, Tiny endures life's worst, yet still comes out with her integrity intact. Tiny becomes a mother from an early pregnancy, an event that recasts her life in the world. She battles substance abuse, including crack cocaine, and an ever-increasing family size due to affairs with various men. In the end, she is a mother of ten children from various fathers and lives in an economic situation not necessarily dire, but far from comfortable. Her life becomes an accumulation of bad decisions and dealing with the inescapable pull of addiction. (Tiny's mother was an alcoholic.)

But Tiny refuses to see herself as a cautionary tale. Mark does not present Tiny as an example to make the middle-class comfortable in their rigidly choreographed righteous indignation. Tiny and her family weren't an abstract socioeconomic vector or a problem to be solved, but an American family.

Aperture has assembled a noteworthy cast of contributors for this volume. Isabel Allende and John Irving wrote introductory pieces. It also includes “Take Care of All My Children,” by Tom Waits, a song about Tiny and her family.

Peppered throughout are quotes by Tiny. These help the illuminate her everyday struggles. “I wanna be really rich . . . and live on a farm with a bunch of horses, which is my main best animal . . . and have three yachts or more . . . and diamonds and jewels and all that stuff,” she said in 1983.

As the years go by, age eventually adds weight and gravity pulls things downward. Her beauty fades and friends die. In the end, she becomes a survivor of those early Pike Street years. What she lacks in material comfort she makes up for with a large loving family, including children and grandchildren. With her wildness tempered, she presents a figure of strength for her family. She is saddled with regret for her past, but she doesn't let it bog her down. Instead, she endures.