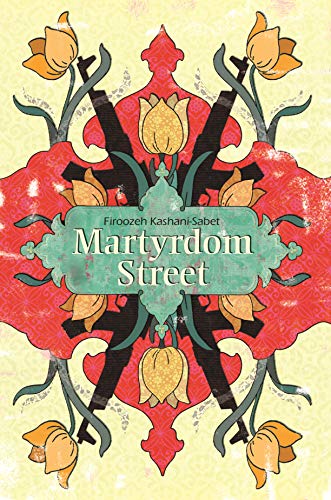 Martyrdom Street, by Firoozeh Kashani-Sabet, is an interesting and informative book about life in Iran and America during the Revolution and after the Iran-Iraq War from about 1979 to 1993.

Using three different female narrators, Kashani-Sabet attempts to provide different perspectives on the cultural, political, religious, and social life in Iran and America. Although the work is engaging and thought-provoking, it is a seriously flawed novel.
Martyrdom Street is organized as a series of sketches or chapters in which each of the narrators—Nasirin; Fatemeh, her mother; and Yasaman, a friend—relates some of her story. Even though the three women have varying views of the world and their experiences, their voices sound very much alike, so that without some context and different content, the characters would be indistinguishable from one another.

For instance, many of the narrations open with flower imagery. Fatemeh, describing her garden in Iran states, “Red tulips are spring flowers, the flowers of carnage and carnal pleasure, the sins of wine and war brought together.” In the next chapter, Nasrin opens her narrative: “A trail of empty branches hangs at odd angles, extending beyond the boundaries of Central Park. Even the perennials, whose green glistens with the winter frost, tilt their necks like a brigade of defeated soldiers.”

A few chapters later, Yasaman, who lives in New York, writes, “The bloom of jasmine. The luster of pearl. The jingle of ivory. The flow of coconut milk. The fall of snowflakes. The innocence of clouds. What is white?” The flower imagery and pseudo poetic, philosophical observations are poorly developed in the remainder of the narratives, overwrought, and pretentious. The language, the imagist non-sentences, and attempts at lyricism are littered throughout each narrative, making each voice sound like the one before. The novel is also overburdened with weighty chapter headings, such as “Bloom of Jasmine” and “Emerald Forests” that, like the imagery found throughout the novel, are undeveloped and clichéd.

Kashani-Sabet’s novel is confusing at times, not because there are three different narrators, but because the narratives don’t tie together clearly and are often vague, inaccurate, or chronologically confusing. The characters make references to events that haven’t been explained yet. For instance, Fatemeh refers to an “accident,” as if the reader knows what she means, even though she hasn’t yet explained the incident clearly; or Yasaman gives details about the personal life of a man who—as far as the reader has been informed—she doesn’t really know but only observes.

On a number of occasions the author fails to makes the necessary connections between events and characters in order to make the narrative coherent.

In addition to numerous chronological inconsistencies and generally vague and confusing dates, there are quite a few anachronisms and errors in the novel. In describing a rally in New York that takes place in the late 1980s or perhaps the early 1990s, Nasrin is told that its location change was publicized on their website. The Web was not widely used at that time, particularly to disseminate information about events.

Later, perhaps as late as 1993, Nasrin refers to her iPod, which had not been invented at that time. In yet another section about New York, Nasrin writes, “Two preschool kids huddle closely on the steps where I am sitting. . . . They point to a canoe carrying an elderly man and woman. When one of them begins to cry over a toy, I move away. I hope Hamid won’t insist on starting a family soon. Fifth Avenue hums with enchanted tourists and creaky baby carriages. A well-dressed woman walks down the block at my speed.” There is no lake or place to canoe on Fifth Avenue. If, Nasrin is referring to the lake in Central Park, then she needs to include a sentence about leaving the park and walking onto Fifth Avenue. This is merely one of many examples of missing sentences or links that would make the story clearer and more cohesive.

The novel reads more like a rough draft than a polished work of fiction. Kashani-Sabet makes insightful and interesting observations about an exile’s experience, about the political situation in Iran, the different social classes of Iranians, and various cultural and historical situations that might be more effectively related in a work of nonfiction.

Unfortunately, she doesn’t translate this information into a well-crafted novel.