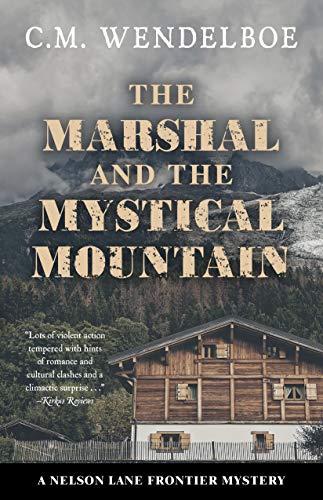 “Wendelboe’s main character is a survivor of the Great War, a one-eyed marshal in the manner of Rooster Cogburn, a little cantankerous, still remembering the horror of that war, but determined to honor the badge he wears.”

When US Marshal Nelson Lane’s Arapaho friend Yancy Stands Close asks for Nelson’s help in finding a missing person, neither has any idea the situation they’re about to step into.

“Jesse felt this was his one chance to breakout of the dirty journalism. If only he could sell an article to a major newspaper, he would be on his way.”

Nelson wonders if Jesse would’ve been successful in seeing anyone at the lodge because the owners are so secretive. No one knows anything about them, not even their names.

Yancy, on the other hand, believes Jesse might’ve been affected by the Mystical Mountain curse.

“‘We Arapaho believe in the Mystical Mountain curse. Men—war parties, hunting parties, have ridden into those mountains and never come out.’

Nelson goes to the Lodge, finding it is, indeed, a secretive place, and none too friendly to outsiders. Supposedly a hunting lodge, its fees are exorbitant. There’s a private air strip for hunters to use, and a squad of employees looking more like a group of mercenaries, all armed.

Weston Myers, caretaker for the Lodge, admits Jesse was there but swears he left, unharmed. Nelson is sent on his way in a not too friendly fashion—with open threats—so unfriendly in fact, he hires a local flying service to take him over the property so he can survey it from the air.

That’s how he finds Jesse’s body half-hidden in a grove of trees. At first, it’s thought the reporter simply got lost and died of exposure. An autopsy proves otherwise.

“‘We’ve never had a murder in this county. Folks go wandering off during hunting season now and then and die of exposure, but not a murder. We’re more civilized.’

Soon, Nelson will be investigating more than Jesse Maddis’ death, however.  It’s not long before the marshal finds himself being hunted from the air by a plane with one of Weston’s henchmen in the gunner’s seat, armed with a machine gun.

There’s more than hunting going on at Mystical Mountain Lodge. Investigation reveals more people than merely Sally’s brother have disappeared while visiting there. It’s a place where big spenders, movie stars, and big-name politicians go to get away from it all and do whatever they want—and it’s not deer and antelope they’ve playing with.

With Sally and his deputy Mavis going undercover as two of the Lodge’s “party girls,” Nelson intends to get the goods on Weston and the Lodge’s owners but the way things are going, he and the girls may be joining Jesse as corpses in the pine woods—unless he can enlist the aid of a one-time enemy who’s taken refuge on Lodge land.

If that enemy agrees to cooperate.

Set during the Depression, Wendelboe’s main character is a survivor of the Great War, a one-eyed marshal in the manner of Rooster Cogburn, a little cantankerous, still remembering the horror of that war, but determined to honor the badge he wears.

Though there’s a great deal of violence in the story, most of it happens offstage so to speak with only a few instances of people actually being killed in Nelson’s presence, though the scene of Nelson being shot at from a plane strafing the forest is definitely an exciting one.

The introduction of Dan-Dan Uster, a petty criminal Nelson has been hunting for years brings an ironic twist to the story. Finding the fugitive hiding out on Lodge land, Nelson has to call a truce, making an old enemy into an ally for the duration of his investigation.

More to come on Dan-Dan, be assured.

An excellent entry in the series, this is a different kind of Western, focusing on a lawman of the 20th century instead on the Old West, though one with the same ethics as his predecessors.