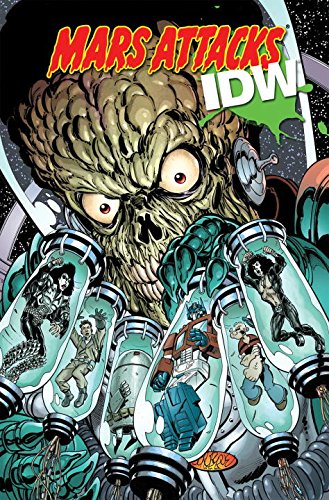 “. . . a delight for all, capturing the best of comics, film, and modern media in one four-color classic.”

It can only happen in a comic book! Across five epic and monstrously entertaining stories Popeye, Transformers, Ghostbusters, Robots vs. Zombies, and the rock band Kiss each battle fearlessly to save the planet we live on from MARTIANS!

Behind the attack are those mean, venal, hideous little creatures that first appeared on a 1962 trading card series created by Topps. Modern fans may recognize the Martians as the invaders from the 1996 Tim Burton film of the same name.

Mars Attacks IDW! tells the story of how these residents from the red planet have spent decades trying to take over this glorious planet. Hiding their grotesque appearance under their massive helmets and wielding deadly ray guns, the Martian soldiers encounter five of the strongest heroes at the core of the IDW Universe.

The first line of defense in this decade-spanning battle against planetary conquest is Popeye. As written by Martin Powell and drawn by Terry Beatty the story will be a treat for anyone who loves the older Popeye cartoons or the original newspaper classic that first featured the squinty-eyed sailor, Thimble Theatre.

Featuring such characters as Poopdeck Pappy, Castor Oyl, Prof. Wotasnozzle, Eugene the Jeep, and of course Olive Oyl and Wimpy, the story opens with Olive Oyl’s father listening to the radio.

This is the first reference to an ingenious device that actually links many of the stories in the series. The Halloween 1938 episode of the Mercury Theatre/Orson Wells production of H. G. Wells’ The War of the Worlds is known as one of the greatest episodes in the history of radio. Allusions to the radio show give cohesiveness to the cross-generational action. The Ghostbusters storyline even sends the characters to a New Jersey farm!

The Popeye storyline will fulfill the dreams of anyone who has longed for the glory days of Popeye's earliest adventures inside the newspaper classic Thimble Theatre. The art is a spot on take on Segar’s style while still maintaining a strong sense of originality. Popeye’s vocal patterns ring a smile to the reader’s face as they hear him ask “Whas a marsh-kin?” or “I yam disguskapated! I sez I yam!”

It is the legendary band Kiss that comes next. A rock group who took its inspiration appearance from classic comic books, glam rock and b-movie sci-fi has now become a strong presence in the comic universe. It seems that their encounter with Mars Attacks may be the secret origin to the band’s formation!

Throughout the story author Chris Ryall incorporates song titles from the band’s catalogues and makes in jokes that both fans and new readers will e able to laugh at. At one point, after the young men destined to become Kiss are in a tumble of mixed arms and legs, Gene instructs the other two members “Stop fighting! Paul and I know what’s best for you!” This is a hilarious nod to the band’s well-documented internal struggles.

Alan Robinsons striking art on the Kiss story is a delight. Bringing together the slapstick of the Bowery Boys and Stooges he also brings to life the empty vastness of space.

The sequence where the Elders create two massive hands to slap down the invading hordes will remind knowledgeable fans of Gil Kane’s art for Silver Age classic Green Lantern #40. As the villain Krona looks into the past seeking forbidden knowledge of his species origin two large hands form. In the Kiss story similar hands slap the Martians out of the sky!

In the next panel these hands that nearly dwarf the cosmos give the Ronnie James Dio sign for heavy metal music. A great laugh, just a great laugh.

Humor that mixes deep in-jokes with casual media reference rips through each story line. As a movie franchise it would be hard to beat Transformers. Each film has entertained millions and grossed much more at the box office. In comics the characters have evolved. In order to stop the invasion the Transformers and Decepticons have had to join forces. The resulting dialogue between the two enemies as they team up is hilarious.

Taking the story into the modern era is the comic book based series Zombies vs. Robots. The earth is now patrolled by robots that fight the remaining earthlings. All of whom appear to be brain-eating zombies. The Martians show up and nothing escapes untouched. The raging public fever for zombies takes a gut punch and the reliance on technology to do our dirty work takes another.

Following each story is a brief summation that updates the reader on how the invasion has indeed spanned decades. As the stories cross the decades we learn of an undocumented fight with The Rocketeer. This is a great idea that many would love to see in a sequel.

Mars Attacks has evolved into one of the most dependable and fun to read series in comic books today. Which is only fitting for their origins actually came from the world of four color magazines.

Trading cards may have held their first appearance but the series was actually inspired by the cover art to a classic EC comic book title, Weird Science #16. Artist Wally Wood had created such a wild take on an alien race that it serves as the source of parody. Over 50 years later the art still influences creators today.

Having been last been seen as the cover art to 2010’s Bart Simpson’s Horror.
A fantastic collection of stories that feature some of the most popular characters and ideas in the world today, the book is a delight for all, capturing the best of comics, film, and modern media in one four-color classic.